The Travel Team Stops at Home Parish in Carlsbad, CA to Recharge our Batteries…. Literally!

Sunday evening, September 1st, we arrived home to relax a night before heading back out on the road. I heard from my wife Hélèna and kids that during the earlier Masses our good friend from our home parish, Deacon Jerry Heitschmidt, announced we would be coming by saying, “It’s not what you know, but who you know.” This benefit however was more for us knowing everyone there. 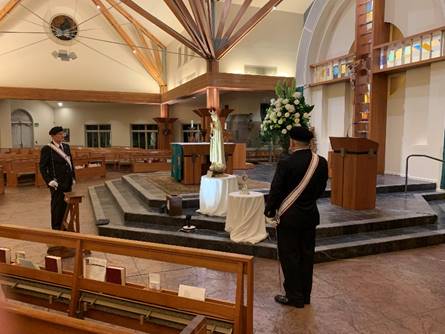 Our pastor, Rev. Michael Robinson, had prepared to lead the parish in the Holy Rosary and reverent proceedings. Our altar society had arranged a beautiful setting, our local ‘always ready to step-up’ Knights of Columbus Council 9022, led by current Grand Knight Phil Urbina, was ahead of the curve as usual in promoting the visit and scheduling color corps.

As a backgrounder, we set out on this journey determined to be careful to keep in mind if we are without guidance of the Holy Spirit and help of the Lord, “we labor in vain who build.” Well, as the adage or epigram goes for Murphy's law, "Anything that can go wrong will go wrong." Just as Father Michael began to lead everyone in praying the Rosary, I am tapped on the shoulder by Patrick Sabat, the custodian of the International Pilgrim Virgin Statue of Fatima. He informed me that there was a problem with our rolling tour-of-peace billboard, which would not start. People venerating this special statue over the years have experienced Our Lady’s presence and favors, so I said, “Give me a minute and I’ll be out.” 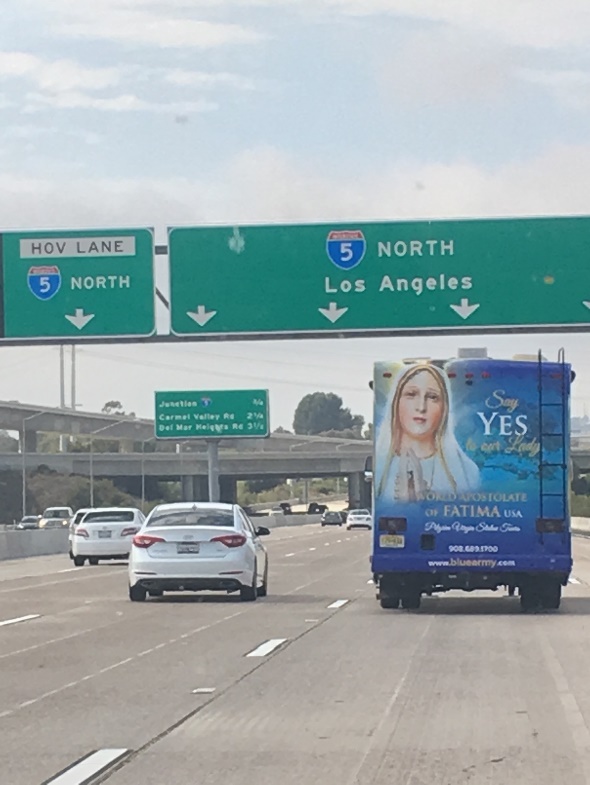 I called my AAA ‘always reliable’ first hoping it would need a battery charge or new battery at most. The AAA crew showed up with battery chargers and batteries aboard; however, nothing would suffice. Deacon Jerry came out after the Rosary concluded and called a fellow parishioner, Scott McCaw, who just so happens to be the district manager of O’Reilly Auto Parts. He arrived shortly afterwards to help and had the wherewithal to know which batteries would fit the RV and how to get them on a late Sunday night. It turned out though to be a mechanical issue and we had to wait until the next day for a mechanic. Upon wrapping for the night, I asked a fellow parishioner if perhaps we were under spiritual attack for this project since this was the ‘First-Time’ in its history the RV broke down. He said no; if it were going to break down, maybe He decided it would be at home where we could safely park it and get all the support we needed; Our Lord works in mysterious ways.

I had to ask my wife later about the Rosary led by Fr. Michael which brought her to recall and revive the belief she had as a child growing up in France in the full power of the Rosary, especially when led by a holy priest altogether with his congregation!

As you can see, our trusted rolling billboard is back on the road to help us visit 21 missions in 21 days and to ask the world to say yes to falling in love with our Lord Jesus Christ again. Next up, Mission San Luis Rey de Francia, "The King of the Missions".

To become part of the Portolá 250 pilgrimage, click here to send your intentions.