Sister Lucia did not reveal the Third Secret of Fatima until much later. In her description of the vision, Lucia quotes an Angel with a flaming sword who pointed to the earth and cried aloud: “Penance, Penance, Penance!”. Then, Lucia recounts the martyrdom of the Faithful, of those true to the Sacred Heart of Jesus and the Immaculate Heart of Mary. Two Angels collected the blood of the martyrs in a crystal vessel and sprinkled it on the souls ‘making their way to God’.

“The third part of the Secret…has to deal with the spiritual chastisement brought about by the rebellion of man who instead of giving his heart to the Sacred Heart of Jesus through the Immaculate Heart of Mary gives over his heart to the corruption of the worldly materialism and relativism of the age.”

Let us petition Our Lady of Fatima to hear our prayers for the conversion of sinners and for peace in the world and in our families.

Most Holy Virgin, you appeared at Fatima and revealed, to the three little shepherds, the treasures of graces hidden in the reciting of the Rosary.

Inspire our hearts with a sincere love of this devotion, so that by meditating on the mysteries of our redemption, we may gather its fruits and obtain the conversion of sinners, and the conversion of non-believers throughout the world.

O Holy Mary, I also ask for the favor that I now so earnestly seek…

O Mary, may that which I ask in this novena, be for the greater glory of God, for your own honor, and for the good of all people. Amen. 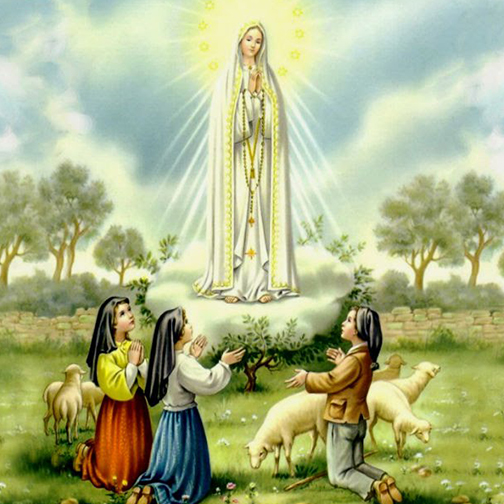 Our Lady of Fatima,
Pray for us!