Who Defines the Work of the Church? - Catholic Action For Faith and Family

You know well the passage of the dialogue between Jesus and the Apostles at Caesarea Philippi (Mt 16:13-20; Mk 8:27-33). Jesus asks His closest followers, “Who do people say that I am?”  They offer the different perceptions of the day, “Some say John the Baptist, others, Elijah, Jeremiah, or one of the Prophets.” “But who do you say that I am?” Peter responds quickly, “You are the Christ, the Son of the Living God!”

Jesus commends Peter, and entrusts to him the keys of the Kingdom; an extraordinary role in the Church.

Imagine for a moment, if Peter, a few years later, after Jesus’ Death, Resurrection, and Ascension, posed the similar question in the Church. He asks, “What do people say about the Church and Her mission?” We could expect a variety of opinions and observations.

We can ask the same question today: What do people say about the Church? Who determines Her teachings and work?

Jesus established the Church, and chose the first “pope,” St. Peter. As Vicar of Christ, and the successor of St. Peter to whom was given the keys to the Kingdom and the power to bind and loose, the Pope must listen to God the Holy Spirit to set the mission and work of the Church in accordance with the teachings and will of Jesus Christ. The Lord promised the Gift of the Holy Spirit, Who “… will teach you all things and remind you of all that I said and did” (Jn 14:26). 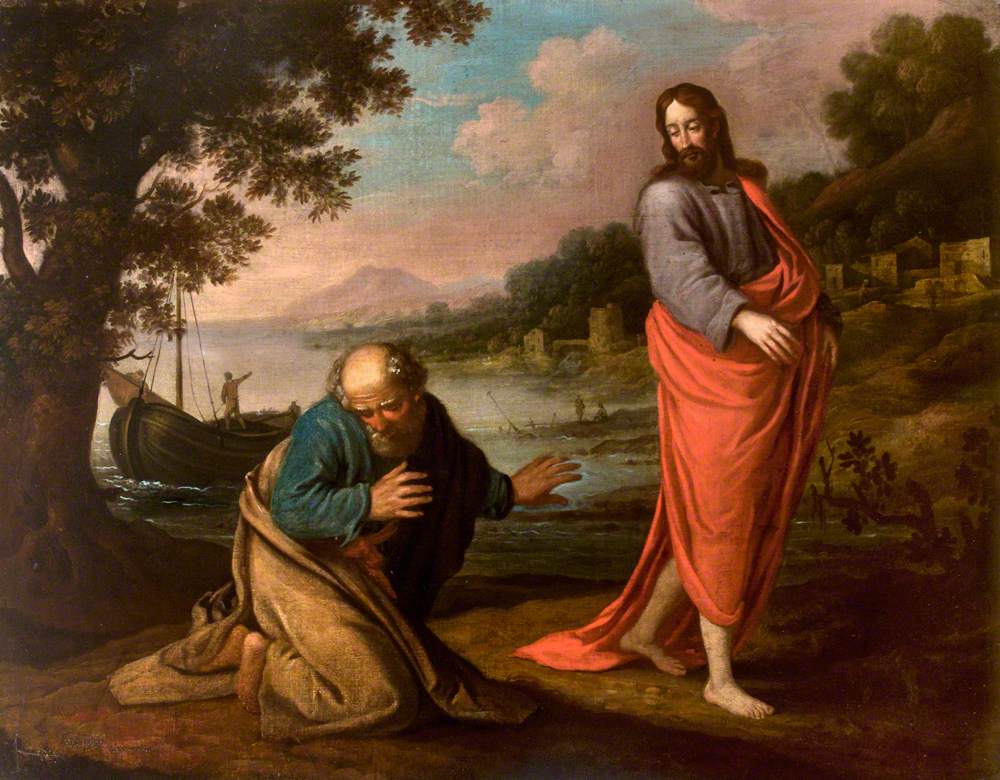 The Rebuking or Calling of Saint Peter, Flemish School, circa 1600

There is forever the temptation to follow the culture: the ways of the world. People – perhaps even a majority of people - may say the Church needs to change and ease its teachings about marriage, contraception, homosexual acts, the protection of human life, or any number of things. They may say that these teachings are too difficult to comprehend or to follow. Sometimes when people ask, “What would Jesus do?” they actually mean, “What would I do if I were Jesus?” Jesus Christ entrusted His unchanging Truth and the interpretation and application of that Truth to the One, Holy, Catholic, and Apostolic Church, and to its supreme pastor and teacher, the Roman Pontiff, head of the college of bishops (Catechism of the Catholic Church, no. 891).

In the passage immediately following Peter’s wonderful witness of faith, Jesus begins to tell the disciples about His impending suffering, Death, and Resurrection (Mt 16:21-23). Peter, who had just professed his faith in Jesus as Messiah and God, now rebukes Jesus for this silly talk of suffering. Jesus, in turn, strongly corrects Peter: “Get behind me Satan. You are not thinking as God, but as man.” Even St. Peter, who would be the first Pope, seemed, in this instance to prefer to take the easy way. 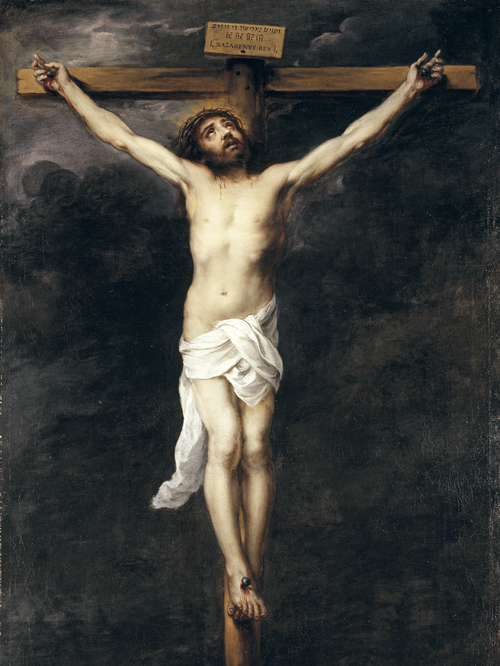 When the Pope and the Church remain faithful to Christ, they can expect to walk the same path Jesus revealed. “Jesus began to show his disciples, how He must … suffer many things from the elders and chief priests and scribes, and be killed, and be raised again the third day” (Mt 16:21). The Truth of Jesus Christ was opposed then, and will be opposed by many today and throughout human history. Jesus told His disciples at the Last Supper, “If the world hates you, realize that it hated me first… Because you do not belong to the world… the world hates you” (Jn 15:18-19).

When we ask, “Who defines the Church? Who establishes the plan for her work in the world?” people respond in various ways. Some say, “The majority of people determine what can be done.” Others say, “As the culture changes, so also the Church must evolve;” and others, “The voice of the media and the goal of maintaining good public relations must prevail.”

The mainstream media and the dozens of blogs and commentaries on social media have their own opinions about the Church and Her divine mission. At every strata of the hierarchy of the Church, from laypeople to Pope, we hear these sometimes strident voices. Some people will wish to reshape the mission of the Church to satisfy the prevailing cultural agenda and to “keep the peace.” Some may propose a path that is less difficult, even when such a direction is contrary to Christ.

If, like St. Peter in the Gospel, we were to take issue with the Lord’s prophecy that when we follow Him we will find the Cross, we can expect also to hear Christ’s rebuke: “You are thinking not as God does, but as human beings do” (Mt 16:23).

What defines the Church and Her work? Some say, the will of the people, others say, the tide of public opinion or the loudest voices of the media. But we say it is the expressed will of Our Lord Jesus Christ and the unchanging teaching of His Catholic Church. 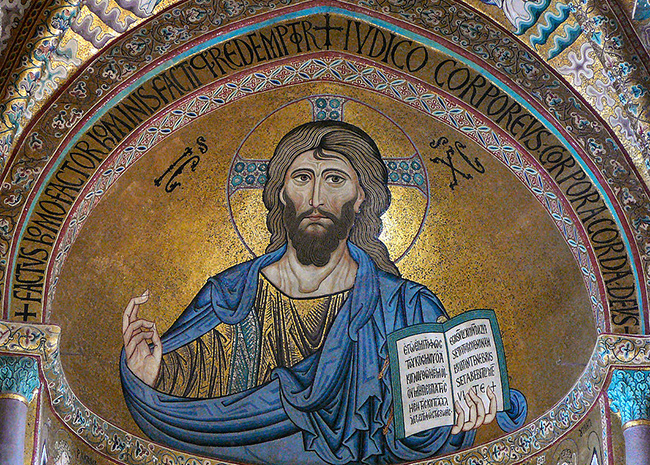 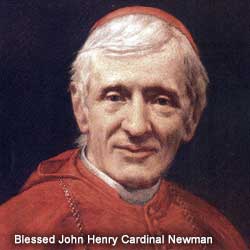 “Many persons are very sensitive of the difficulties of Religion; I am as sensitive of them as any one; but I have never been able to see a connection between apprehending those difficulties, … and on the other hand doubting the doctrines to which they are attached. Ten thousand difficulties do not make one doubt, as I understand the subject; difficulty and doubt are incommensurate. There of course may be difficulties in the evidence; but I am speaking of difficulties intrinsic to the doctrines themselves, or to their relations with each other. A man may be annoyed that he cannot work out a mathematical problem, … without doubting that it admits of an answer, or that a certain particular answer is the true one. Of all points of faith, the being of a God is, to my own apprehension, encompassed with most difficulty, and yet borne in upon our minds with most power.” 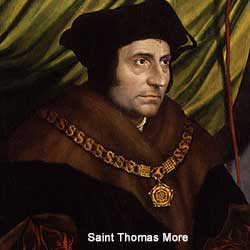 “At this point, [Lord Chancellor] Audley broke in to dispute his argument. How could More, alone, presume to challenge so stubbornly what ‘all the bishops, universities, and best learned of this realm’ had agreed to support?

More responds: ‘If the number of bishops and universities should be so material as your lordship seems to think, then I see little cause, my lord, why that should make any change in my conscience. For I have no doubt that, though not in this realm, but of all those well learned bishops and virtuous men that are yet alive throughout Christendom, they are not fewer who are of my mind therein. But if I should speak of those who are already dead, of whom many are now holy saints in heaven, I am very sure it is the far greater part of them who, all the while they lived, thought in this case the way that I think now. And therefore I am not bound, my lord, to conform my conscience to the council of one realm against the General Council of Christendom.’”