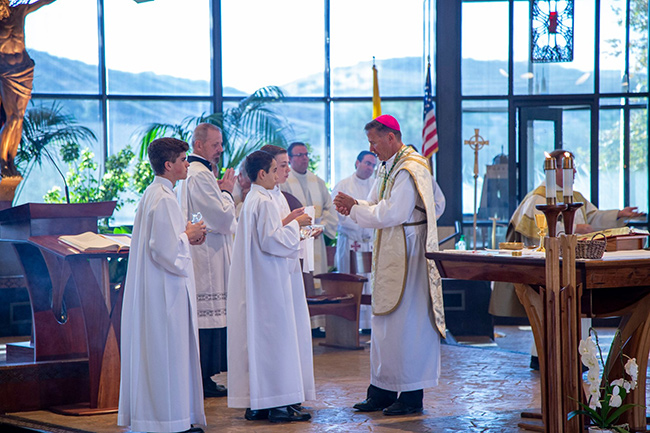 Saturday, November 9th, Catholic healthcare professionals from San Diego and surrounding areas gathered at St. Thérèse of Carmel Catholic Church in the diocese of San Diego for the 8th Annual White Mass. The Mass, which drew more than 200 Catholics from across the diocese, was sponsored by St. Gianna Physician's Guild, a program of Catholic Action, and Culture of Life Family Services.

The “White Mass” is named for the traditional white coats and uniforms worn by medical personnel and is a special way of honoring all health care professionals. In addition to physicians and nurses, the Mass honors hospital personnel, pharmacists, mental health specialists, hospice workers, medical students, pastoral care givers and others dedicated to the healing profession of medicine.

Thomas McKenna took a few moments to greet and thank everyone for coming on this Saturday morning and shared a few words about the importance of the White Mass, the mission of St. Gianna’s Physician’s Guild, and expressed his appreciation to have Bishop Joseph Coffey celebrate the Mass. His Excellency Bishop Coffey has been a staunch defender of pro-life principles throughout his life and was appointed Auxiliary Bishop for the Archdiocese of the Military Services, USA earlier this year. Bishop Coffey was joined on the altar by six other priests and three deacons who came to support the health care professionals. 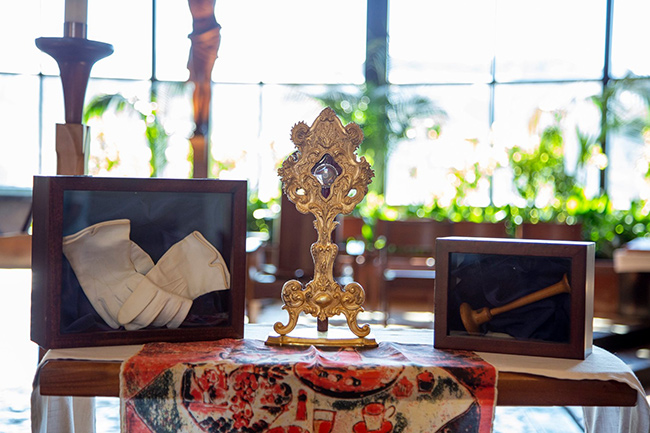 Relics of St. Gianna: a pair of gloves (left), a lock of her hair (center), a fetoscope she used to listen to a baby's heartbeat in the womb before sonograms were invented (right), and a silk scarf used by St. Gianna (below).

Also, all were blessed this year to have the presence of Dr. Gianna Emanuela Molla, a living relic and namesake of her mother, St. Gianna Beretta Molla, who was canonized by Pope John Paul II in 2004. Gianna gave the keynote address at the reception following Holy Mass.

Special vestments, provided by Catholic Action for Faith and Family, were used during the White Mass. They contain a piece of St. Gianna’s wedding dress which was sewn into the liturgical fabric. This White Mass was only the third time these vestments have been used.  Opportunities were provided for attendees to venerate sacred relics of St. Gianna which included her physician’s fetoscope, dress, gloves, a scarf and a clipping of her hair.  The choir of St. Thérèse of Carmel sang beautiful hymns adding special note of honor and sacredness to the Mass. Among them was the official hymn of St. Gianna sung in Italian. 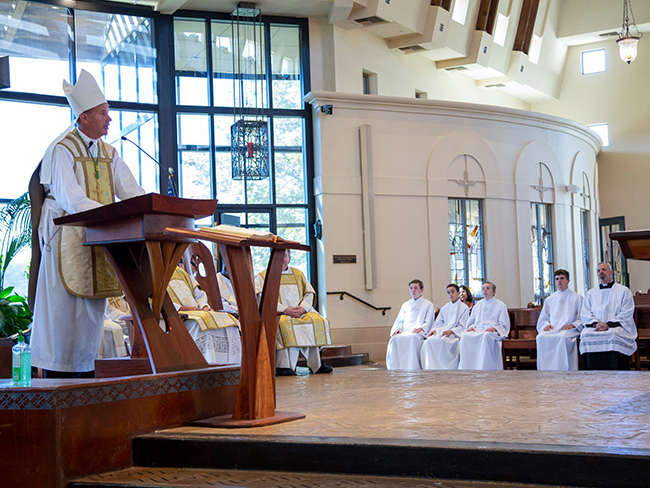 Bishop Coffey began his homily by referencing a recent lecture given by Archbishop Charles Chaput of Philadelphia where he stressed, “it’s a good thing, a vital thing, to consider what we’re willing to die for.”

This set a narrative and a tone that was quite appropriate, as during Bishop Coffey’s homily, he outlined that in addition to technocratic challenges, a rapidly growing litany of moral and ethical issues presenting unique challenges to Catholic health care providers such as elective abortion, contraception, sterilization, gender reassignment surgery or therapy, acts of euthanasia, etc.

"If we are to be true to the mission of Catholic Health Care, there are some things we are not going to do," said Bishop Coffey. "[In doing so], we may face criticism, we may face fines, and yes, it is possible we may face death.”

At one point during the homily, Bishop Coffey asked all health care professionals to stand as he led them through a renewing of their profession of faith asking them to affirm publicly their fidelity to their vocation. He associated this renewal with Catholics worldwide who are being persecuted for their Faith. While in the U.S. we may not be required to give our lives, we should share in the courage and witness of modern day martyrs against those who want to degrade human life and push our Christian heritage out of the public square. For the medical professionals who attended the White Mass, they in a particular way must share in the witness of modern-day martyrs by refusing to go along with pro-abortion agendas that may be forced on them.

In short, the professionals who attended made their oath knowing they may face white martyrdom while our brothers and sisters in Christ overseas face red martyrdom.

Bishop Coffey tied it all together by saying he remembers vividly reading as a boy the Hippocratic oath framed on the wall of his father’s office. His father was a physician, and as he was nearing the end of his life, he told his son ‘Bishop Coffey’ that he was extremely distressed about the direction the medical profession was heading... "And that was 20 years ago!!!" the Bishop exclaimed. Everyone knew this meant matters have gotten exponentially worse since then.

Amid these challenges, the need for Catholic Health Care has never been greater; professionals who safeguard and promote respect for all human life from the moment of conception to the moment of natural death. “We are blessed that the Catholic Church, by means of Sacred Scripture, Divine Revelation and the Magisterium (teaching office), gives us a very balanced, practical approach to life issues,” said George Delgado, M.D., medical director of Culture of Life Family Services and the founder of Abortion Pill Reversal, now known as Abortion Pill Rescue.

It should be noted Catholic Health Care in fact is proven to be the best model for health care in the world and as a result is the largest non-government provider of health care services in the nation and the world.  “We know many Catholic Health Care practitioners act out of a religious mission and are guided by concerns that transcend the marketplace,” said Thomas McKenna. “We must strive together as a faith sponsoring community to double our support for all those on the front-lines who are facing increasing pressures and challenges to maintaining their Catholic identity in their ministries to deliver exceptional health care and to perform the Church’s important corporal work of mercy of caring for the sick.”

At the reception, Dr. Molla spoke about her mother’s faith and what it is like being the daughter of a canonized saint. She shared fond memories about the special relationship she witnessed between her mother and her father Pietro, even reading letters between her holy parents.

“The Lord chose my Mom among the many Saint Mothers in Paradise to be a model for mothers, for young people, fiancées, spouses, physicians, health care workers and families as well; and in order to allow her to do a great deal of good as she has been doing in different countries of the world for many years now, I can testify to this,” she said.

It was an awe-inspiring day to remember! 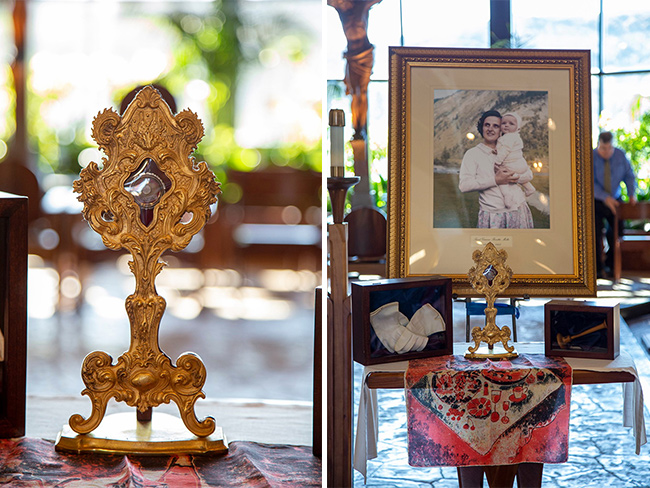 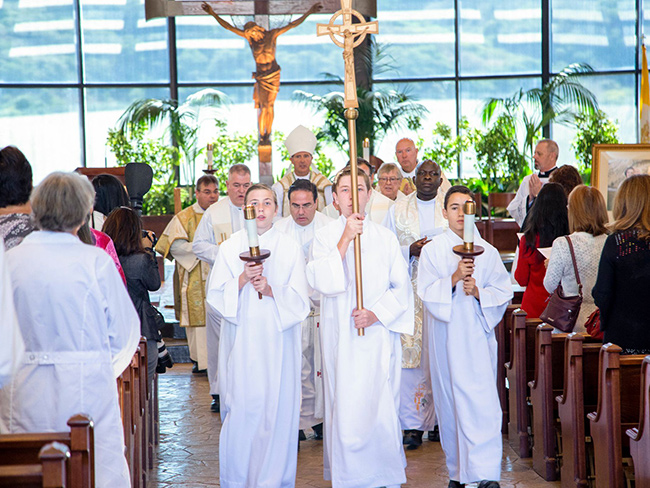 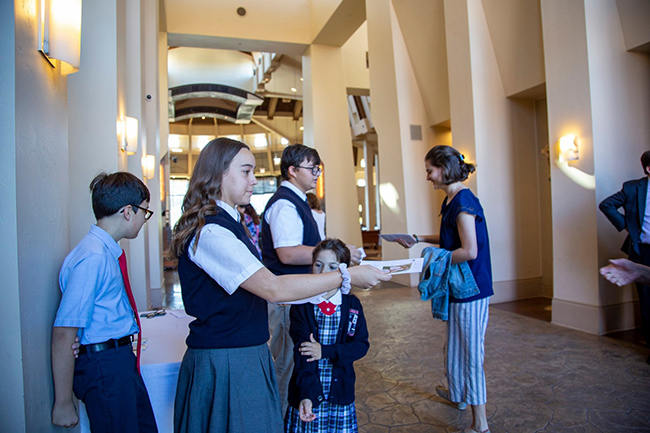 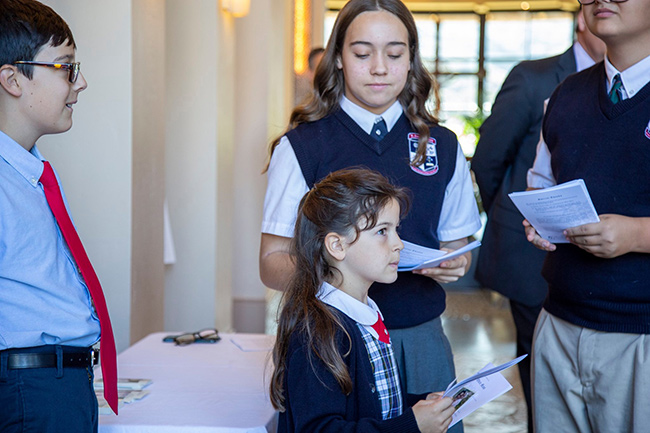 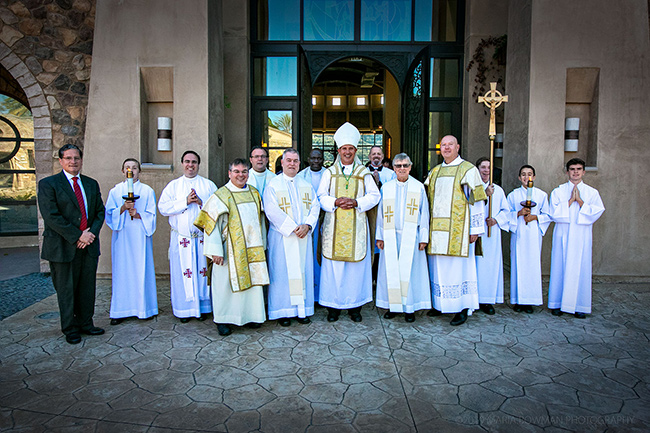 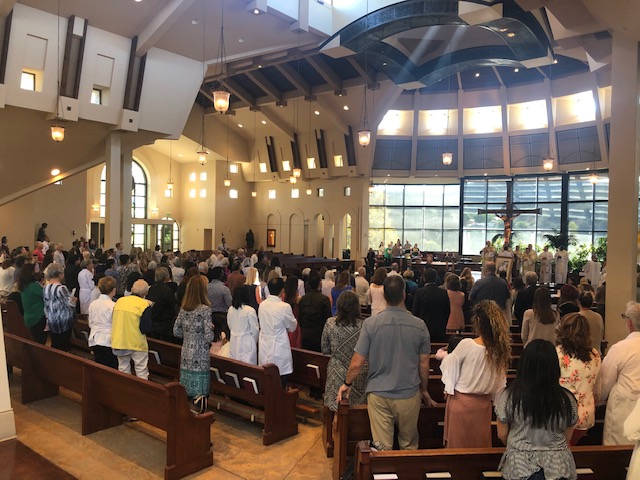 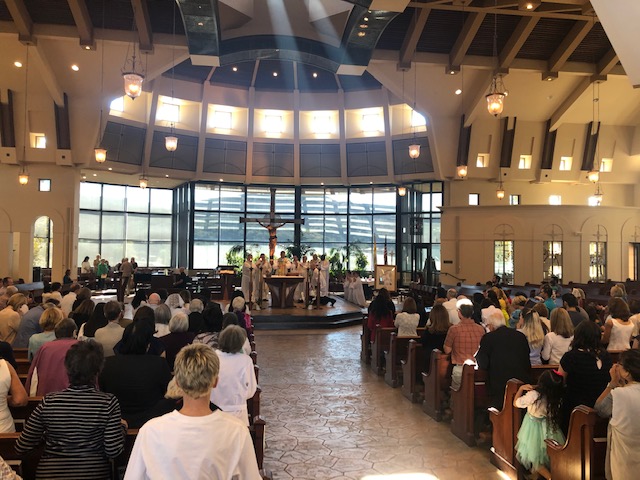