The Vatican’s Congregation for Education has weighed in supporting local Catholics who believe that it is a scandal and damaging for a Catholic university to host a drag show.

The official letter stating the position, was issued by the Pontifical congregation whose jurisdiction oversees houses of formation and institutions including universities. (see full translation of this letter below)  This came as a result of two concerned San Diegans who filed petitions last year with Church authorities asking them to review the situation and, if appropriate, intervene to stop and denounce the event which has become a yearly practice at the University of San Diego since 2012. 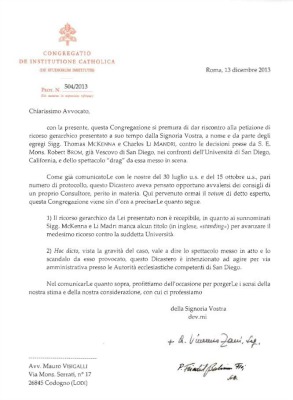 Attorney Charles LiMandri, who founded the website www.AlumniForACatholicUSD.org, collaborated with Thomas McKenna, Founder and President of Catholic Action for Faith and Family. They both filed canonical petitions in the wake of the “Drag Superstar 2″ event held on the USD campus in April 2013.

The two got involved when students from the University, who objected to the show, reached out and asked for their support to stop it. Charles LiMandri, an alumni and past President of the USD Alumni Association, initially contacted the University asking them to stop the show. He pointed out that “it was not in line with Catholic principles nor the Catholic values and vision of the University’s founders.” When the administration defended the Drag Show and said it would go ahead, he turned to other alumni and publicly denounced it.

Following the drag show in 2012, the petitioners went to Rome and consulted with Vatican officials from various Congregations and were encouraged to pursue this action. After the “Supreme Drag Show 2″ in 2013, they made their case providing extensive and well documented exhibits. “The Vatican personnel viewed the case very seriously and had their experts review the material as well” McKenna stated.

In an official response from the University in 2013 to the petitioners’ request that the show be stopped, the university stated: “The event supports the Church’s teaching on the innate dignity of the human person, and by illustrating cross-dressing, it does not promote either behavior or lifestyle that is contrary to the teachings of the Church.”

After attending both drag shows together with students Thomas McKenna said: “I witnessed many examples of behavior and statements on moral issues which contradicted or ignored magisterial teachings.” Not only was the Catholic Church’s teaching ignored, but it was mocked.

In response to McKenna and LiMandri, the Congregation stated that: ”in view of the gravity of the case, it is worth mentioning that in light of the show and the scandal that it caused, this congregation intends to act through administrative channels to the competent ecclesiastical authority in San Diego.”

LiMandri and McKenna said they were making the Congregation’s determination known publicly, after consulting with Vatican officials this week, due to the fact that a third drag show is scheduled for April 10, 2014. They have also written to the president again this year asking that the show be cancelled.

It is by means of this letter that this Congregation would like to respond to the appeal that you submitted on behalf of Mr. Thomas McKenna and Mr. Charles Li Mandri against the decision taken by Msgr. Robert Brom, Bishop of San Diego, regarding the University of San Diego in California and a “drag” show that took place there.

As it has already been communicated to you in our letters of July 30th and October 15th, this Congregation thought it opportune to avail itself of recommendations of its own counsel who is an expert in the matter. In light of the opinion that was reached by said expert, this Congregation hereby clarifies as follows:

We would like to take this occasion to extend to you our esteem and consideration, and we remain,