The president of Catholic Action for Faith and Family, Thomas McKenna, attended the Supreme Drag Show 3 at the University of San Diego on April 10, 2014, together with other concerned Catholics. The show went on despite the fact that Thomas McKenna and Charles LiMandri, chief counsel for Freedom of Conscience Defense Fund, advised University President, Mary Lyons, that the Congregation for Education in Rome had reviewed reports from the past two drag shows and had determined that they were scandalous.

The documented report presented here is aimed at informing the public at large of the scandalous program. The organizations will continue their appeals to the Vatican Congregations in a continued effort to bring these scandalous programs to a halt.

In what has now become a deplorable annual event and despite a formal Vatican pronouncement calling it a “scandal,” the University of San Diego presented its third Supreme Drag Superstar show Thursday evening, April 10, 2014 at the Shiley Theatre. As in previous years, the 600-seat theater was packed to near-capacity, mostly with students, but also with several faculty members and administrators.

The event was publicized on the Pride at the University of San Diego Facebook page beginning March 21. There, Jack Dorso commented, “Try being Catholic for once.” The Facebook page administrator responded, “Jack Dorso – I know that some may find this conversation uncomfortable, but in our view, and the view of the University, this event is consistent with the mission and values of USD as a Catholic University to celebrate and promote diversity and inclusion. By providing a safe space we are able to engage in dialogue and grow as a community.”

Posters advertised the drag show throughout the campus, as did the flashing electronic message board at the school’s main entrance the night of the performance.

Security seemed lighter this year. Although several campus police officers milled about the Shiley Theatre entrance, but no Elite security guards were present, as they had been last year. No sidewalk protests by concerned laity or student reparation Rosaries took place this year. However, several concerned local Catholics circulated emails asking for prayer and fasting the day of the drag show, as well as requests to write to USD president Mary Lyons, other administrators, and San Diego Bishop Cirilo Flores. 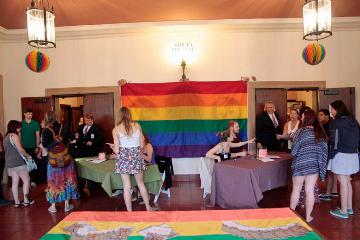 As students entered the theater foyer, they were greeted by rainbow flags and other decorations symbolizing the homosexual activist movement.

Perverse concepts of “transgender” and “gender nonconformity” were displayed on posters in the foyer, and other definitions, such as “gender expression” were printed on the backs of admission tickets.

Inside the theater, as people were getting seated, a rotating display of gender-related terms similar to those on the foyer posters and tickets played continually on a large onstage screen. One of them showed “The Genderbread Person,” a gingerbread man drawing describing additional modernist gender terms. 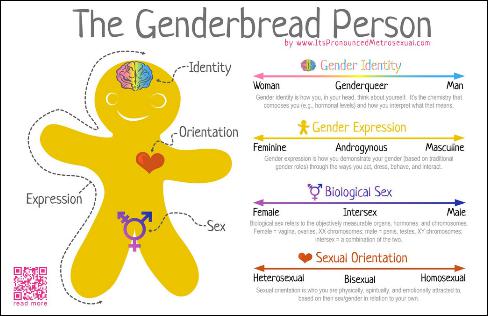 The event program given to audience members contained several items of note:

The cover of the program showed the artwork banner for “Supreme Drag Superstar III” and the logos of the show’s main sponsors, USD Associated Students and Changemaker Hub. The term “changemaker” was mentioned several times during the drag performance.

“The Changemaker" Hub was launched Fall 2011 as a campus-wide manifestation of the University of San Diego’s commitment to its mission and values, and to promote entrepreneurship, collaboration, and innovation for positive social change by linking occurring initiatives at USD, as well as developing new ones.” One might surmise that the drag show was designed to effect “social change” by moving USD further away from traditional Catholic values and toward secular, pro-homosexual values.

The bottom of the cover states that the drag show is “A Changemaker Event” (so it’s official!) produced in collaboration with the Torero Program board, which handles event planning at the university.

Page 2 of the program was divided into two sections:

The Campus Resources list also included University Ministry, with Michael Lovette-Colyer as the contact person, and the Women’s Center, headed by his wife, Erin Lovette-Colyer.

Page 3 gave the order of appearance of the various acts. As in prior years, the show included several student drag performances, interspersed with speakers, including Dr. Lori Watson, associate professor of philosophy and director of the women and gender studies program. Interesting to note that on her official biography page on the USD website it states that she has a “partner” Michelle.

Ask yourself: what, if anything, do any of these choices or these social signs of gender have to do with your biological sex?”

The back cover contained thanks and acknowledgments of various administrators, judges, campus partners, and donors. 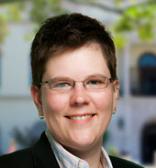 It was Vazquez who, in response to public outrage over last year’s drag show, described the drag show as “a combination of informative dialogue, campus resource offerings at information tables, and playful lip-sync performances designed both to raise awareness and understanding of the complex issues surrounding gender identity and expression, and to underscore the importance of mutual respect and the dignity of each individual.” Vazquez also asserted that the show “violates neither the university’s mission nor any university policies. The Celebration of Gender Expression supports the Church’s teaching on the dignity of the human person and does not promote either behavior or lifestyle that is contrary to the teachings of the Church.”

This year, it was O’Malley who dismissed concerns about the conflict between Church teaching and drag shows, telling the San Diego Union-Tribune, “. . . the law of the church is silent on cross dressing. There [is] no evidence that cross dressing is inherently homosexual.” 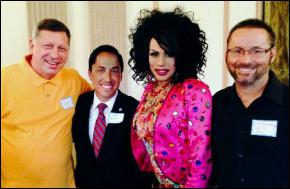 As in 2012, the show was emceed this year by local professional “drag queen” Tootie Keanuenue Nefertootie, who works at Lips, a San Diego restaurant that bills itself as “the ultimate in drag dining.”

A few days before the drag show, Tootie visited USD’s campus for a photo shoot. On his Facebook page, he posted the following picture and commented, “Invited back to USD to help with Pride. Always so lovely working with them,” and praised the school’s “beautiful architectural features,” which were used as backdrops.

Tootie had on his web site a full page dedicated to promoting homosexual marriage laying out goals and resources to achieve this. This alone should serve as reason enough to bar him from appearing on a Catholic campus.

At the drag show, Tootie also posed with openly homosexual San Diego city council president Todd Gloria (second from left), a USD graduate who during his student years was instrumental in advancing the homosexual activist agenda on campus.

The drag show opened with the video "All Night" by Swedish duo Icona Pop, which according to Wikipedia, “follows the hidden lifestyle of nightlife performers, particularly, but not limited to drag queens.”

After the video finished playing, Tootie made his grand appearance dressed in a sparkly gown with a large disco ball covering his left breast, announcing that we’re here for “diversity and inclusion,” secular values that USD today seems to prize far more highly than traditional Catholic values of holiness and sanctity. 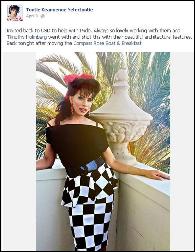 Tootie said that baskets were available for monetary donations to the San Diego LGBT Community Center, and encouraged students to give. He also acknowledged the following USD faculty members student “changemakers” who were in attendance at the drag show:

The main show consisted of the following student performances:

2BQ Brothers – a spoof on the Blues Brothers song Everybody Needs Someone to Love, performed by Mauricio Lopez and Ruthie “Tiki” Inacay. The “2BQ” stood for “The Two Blues Queer Brothers.”

Lola La Chola – performed by the same man who checked bags at the theater entrance. Dressed in imitation of Elsa, the ice princess from Disney’s recent hit movie Frozen, he sang Let It Go to Get Right, a spoof on the film’s award-winning song Let It Go. As he danced in a very sexually-suggestive manner to loud audience cheers, “Lola” removed his outer cape to reveal a very manly, tattooed physique.

Regis and Carmen Getitt – singing a medley composed of Lady Gaga’s hit Born That Way and Macklemore’s Same Love. Macklemore made news earlier this year when he performed the song during an onstage mass wedding ceremony at the Grammy Awards that included same-sex couples — a spectacle that shocked and dismayed many traditional-values Americans.

Li’Kitty Split – where a young man dressed in a blue dress and blonde wig, accompanied by two female backup dancers, spoofed Britney Spears’ song I’m Not a Girl, Not Yet a Woman. 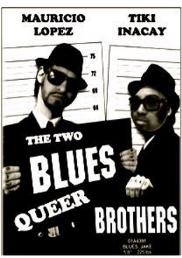 Tasha Salad – a male wearing a frilly yellow mini-dress that exposed his bony knees and muscular calves, who performed Work the Colors of the Wind, a spoof on Colors of the Wind from the Disney movie Pocahontas, surrounded by several others who appeared to be young women wearing various animal masks.

Lupita Parada de Bustos y Diego “El Bandido” del Torro – a male-female duo where the male was dressed in a purple Mexican folk dance dress with rainbow trim, and the young woman was dressed as a matador.

Besides Lori Watson, the following people spoke between drag

Will Williams – a Navy veteran and 24-year-old member of San Diego City College’s pro-homosexual group All Out at City College.

Williams, who presumably was born female, explained that she identifies as a “queer transman” who began taking testosterone to grow facial hair and deepen her voice. She told of visiting Trinidad, Colorado, known as the “sex change capital of the U.S.,” to explore having “top surgery.” (Top surgery refers to surgery on the breast area of transgender patients, such as breast augmentation surgery for male-to-female transsexuals or mastectomy along with male chest reconstruction for female-to-male transsexuals.) Williams recounted how she had hoped the U.S. military would pay for her $6000 top surgery, but would only pay for hormones, so family members pitched in to help raise the money. 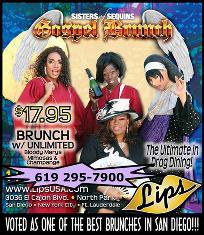 Tootie Nefertootie – the emcee, talked about “my life in drag” and his work at Lips.

He invited the audience to attend Lips’ “Sunday Gospel Brunch” with the Sisters of Sequins, where he dresses as a nun, shown on the far right in this poster.

Sarah Bilello – spoke about “Sexual Assault in the Trans Community.”

Bilello’s talk coincided with USD’s Sexual Assault Awareness Week, April 7-11. A variety of events, including the drag show, were planned to provide “opportunities to learn about the prevalence of sexual violence on college campuses and take action to Shatter the Silence and Stop Sexual Violence,” according to a Facebook page. During her talk, Bilello explained that “homophobia” and “transphobia” are to blame for sexual assault, not the actions of those who exhibit homosexuality or transgenderism.

The final performance of the drag show was a finale by Tootie, who dressed in black robe with a high collar and goat-horned headdress, and lip-synced Good N’ Evil from the musical Jekyll and Hyde.

At one point he took off the robe and continued the performance in a scanty dress continuing with sensual and provocative gyrations all to the screams of the enthusiastic crowd.

The show concluded with closing remarks and awards given to the top three performance by openly-lesbian theology and religious studies professor Evelyn Kirkley, who for years has been one of the foremost agitators and promoters of homosexualism at USD.

Kirkley came onstage sporting a purple feather boa and was soon joined by all the student performers, who also wore feather boas, many of them rainbow-colored. She gave the first-place award to “Tasha Salad,” the same young man who had won first place last year, and flower bouquets to all of the evening’s speakers.

Additional closing remarks were given by another young man, who thanked vice presidents Carmen Vazquez and Tim O’Malley for their support and stressed USD’s values of “diversity and inclusion.” Parroting the same response given to Jack Dorso on USD Pride’s Facebook page, he also said that “though the drag show may make some people uncomfortable, in the show participants’ and university’s view, the event is consistent with USD’s mission and values as a Catholic university.”