Those Who Profess to Love God, but Back Abortion, are Liars - Catholic Action For Faith and Family

Those Who Profess to Love God, but Back Abortion, are Liars 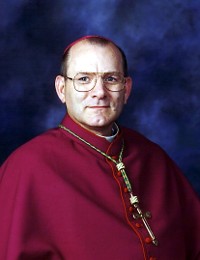 The Mass readings for the week between Epiphany and the Baptism of the Lord are taken from the First Letter of St. John. These readings are not always used for it often happens, depending upon the day on which Christmas falls, that the season of ordinary time begins immediately after the celebration of Epiphany.

This year, however, the occurrence of Christmas allowed for a full week between these two post-Christmas celebrations and thus the readings from St. John’s first letter. As often happens, the daily Mass readings are both appealing and challenging. The reading of Thursday from I John 4:19ff is particularly appropriate in this year when the life issues are very much on the minds of pro-life persons. The reason for the increased awareness and even concern on the part of the pro-life community is the specter of the Freedom of Choice Act (FOCA) which is highly rumored to be in the works at the federal level. It is this act which has stimulated the bishops of the United States to launch a massive postcard campaign calling upon the House and Senate to abandon FOCA.

While further details about the dramatic impact of FOCA on our American culture can be found in many places, I will simply say that it would establish abortion as a federally protected right and, as I understand it, preclude state limitation or regulation of abortion.

Further, since abortion would be a federally protected right, it is very possible that even Catholic health care institutions and Catholic Physicians would be mandated to provide this heinous service.

Thus I strongly urge all who have a glimmer of concern for the lives of pre-born children to engage themselves in this postcard campaign. This is not an action which would limit or alter present permissive abortion laws, which some so-called Catholic pro-choice persons might object to, it would simply preclude a dramatic expansion of that permissiveness. Thus it would be very difficult for any Catholic, no matter how much in favor of abortion itself, to find a reason to refuse to participate in this campaign. At the same time, I do not see how any Catholic senator or representative could vote for the passage of FOCA without recognizing that such a vote would constitute a direct and intentional declaration of their disdain for Catholic teaching. Such a vote would be tantamount to a public declaration of their intention to abandon the Catholic faith. It would be imperative that the faith consequences of such a declaration be allowed to fall fully on the heads of those who would make it.

The writing from St. John applies: “Beloved, we love God because He first loved us. If anyone says, ‘I love God,’ but hates his brother, he is a liar; for whoever does not love a brother whom he has seen cannot love God whom he has not seen.

This is the commandment we have from Him: Whoever loves God must also love his brother.” We of the Catholic faith certainly know that love of God is central to our tenets, this is the appealing part. It is hard to imagine a Catholic saying, “I am a Catholic in good standing but I do not love God.”

But the inspired scriptures tell us that whoever does not love his brother or neighbor does not and, indeed, cannot love God. This is the challenging part. The people of Jesus’ day understood this and it was this understanding that prompted them to ask, “And who is my neighbor?” For all of us, and especially for Catholic legislators in every strata of government, it is necessary to declare, in conformity with the Natural Law and the teaching of the Catholic Church that, the pre-born child is our brother, our sister, our neighbor! It may sound a little strong to state that legislators “hate” the pre-born child but hate is an absence of love and love means to wish another well. There is nothing about abortion that wishes the pre-born child well. The preservation of abortion “rights” is already an absence of love for the pre-born child but the passage of FOCA could be construed as nothing less than active and positive disregard, even hatred, for these our brothers and sisters.

To paraphrase St. John, “If anyone says, ‘I love God,’ but votes for FOCA, thus showing a disregard for his pre-born brother or sister, he is a liar.” Lots of things can be rationalized in government but I do not see any way in which any Catholic could rationalize or justify an affirmative vote for FOCA. It is not necessary for your postcards to be as outspoken as this bishop but you do have an obligation to participate in this concerted effort to show love for the tiniest and most defenseless of our brothers and sisters.

President-elect Obama made it very clear, prior to the election, that he would happily sign FOCA and the millions of Catholics who voted for him hopefully did so for reasons other than this promise and certainly not because of it. It seems to me that it is particularly incumbent upon these same voters to make it clearly known to their representatives that their vote may not in any way be taken as a sign of support for FOCA. Another way in which we show our affirmative love for our pre-born brothers and sisters is by way of our annual memorial on Jan. 22. This year the Diocesan Office of Pro-life Activities has scheduled a rosary and Mass at St. Joseph’s in Prineville on Thursday evening, Jan. 22. The rosary will commence at 6:30 p.m. with Mass beginning at 7 p.m.

While I recognize that many parishes host similar memorial Masses to pray for the two-fold victims of abortion, the child and the mother, I invite any who can to join me at the rosary and Mass at St. Joseph’s in Prineville. Regardless of how many years have passed since the Roe vs. Wade Supreme Court Decision and regardless of how prevalent and routine abortion has become in this country, the simple truth remains, it is an act of extreme violence to the pre-born child and to the distressed mother. Thus, if anyone says, “I love God” and still favors abortion, he is, to quote St. John, a liar. May we all live out faithfully what it means to love God.