In the celebrations following Christmas the Church continues to contemplate the mysteries of the Incarnate Christ. In a beautiful and profound way these include the extraordinary work of the Blessed Virgin Mary.

It may be asked whether Mary’s role was necessary for our salvation. In the absolute, the answer is no. God could have accomplished our redemption in countless ways. 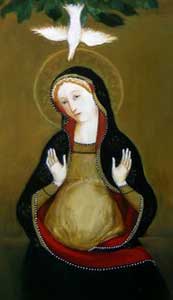 Because God determined to save us by sending His eternal Son in the mystery of the Incarnation, God chose to make Mary necessary as a participant in the work of salvation.

Jesus comes as “true God” to become also “true man.” He takes human flesh, and, conceived by the power of the Holy Spirit, He receives his flesh and blood entirely from Mary, who remains throughout her life ever-Virgin.

In this same flesh and blood of Jesus, He lives in a human nature, “Like us in all things but sin.” (Hb 2:17; 4:15) He sees and hears, tastes, smells, and touches those around Him, and they likewise experience Him as a man. In this flesh and blood Jesus suffers a horrific passion and death on the Cross. He rises bodily from the dead, and, in must invite the incredulous disciples to see Him and realize he is not a ghost. (Lk 24:39) 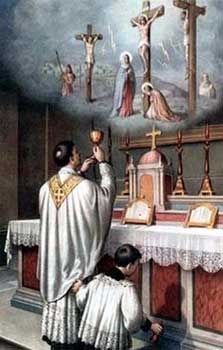 It is this same flesh and blood which, in the mystery of the Holy Sacrifice of the Mass, and the Holy Eucharist, Jesus gives Himself to be consumed. This is My Body; This is My Blood.

In these and other ways, Mary’s role in the mystery of the Lord is proven to be extraordinary.

Tradition has it that after the Resurrection and Ascension of Jesus, St. John, the beloved disciple to whom Mary is entrusted at the foot of the Cross (Jn 19:27) took Mary to Ephesus. So strong was her association with Ephesus that of the two Basilicas there, one would bear her name and the other, that of St. John. It was in the Basilica of Mary in Ephesus that Bishops at the Council of Ephesus (431 A.D.) would affirm the age-old sense of the Faithful and declare as definitive the truth that Mary is Theotokos, The God-Bearer, The Mother of God.

It is said that the people of Ephesus, when they heard the judgment of the Council, went joyfully to meet them with torches, celebrating the Mystery of the Incarnate God who made His home in the womb of Mary.

Excerpts from the Encyclical of Pope Pius XI, Lux Veritatis, on the Council of Ephesus. December 25, 1931