The Holy Trinity - Catholic Action For Faith and Family 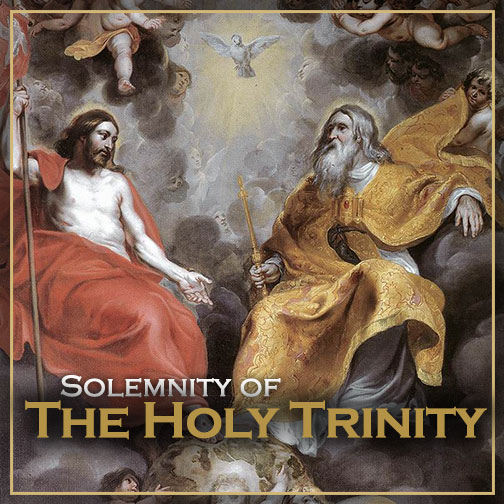 We are washed in the waters of Baptism; we begin and end our prayers; we sign ourselves with the Cross – all in the name of the Father, and of the Son, and of the Holy Spirit.

We invoke God by those names we have learned: God the Father, God the Son, and God the Holy Spirit. There is one God, but three Divine Persons. This is God: manifest in all His works, revealed in the Sacred Scriptures, and taught in the Church’s Magisterium.

So – Is there a “Catholic God?” God is certainly not exclusive to us as Catholics. But in no other Church, but the One, Holy, Catholic, and Apostolic Church – is the mystery of the Godhead, the mystery of the Holy Trinity so clearly, consistently, and continuously taught. In the Creeds, also called the “Symbol of Faith,” (Catechism of the Catholic Church no. 187), is contained and transmitted the precise language which, though human and limited, best explains and expresses this mystery so carefully preserved.

There are non-Christian monotheistic religions, notably Judaism and Islam. They believe in only one God, but reject the Trinity. They do not believe in the divinity of Jesus Christ.

Jesus revealed His Father, Creator of heaven and earth, as “Our Father.” This awareness of our divine filiation – that we are sons and daughters of a Father God - is foundational to our belief in God’s love for us, our sense of dignity, and our eternal destiny to live forever in the house of the Father.

Jesus Christ is God Incarnate. Though eternal, He entered into history: conceived by the power of the Holy Spirit, and born of the Virgin Mary. He is the Redeemer, the Savior whose life, death, and resurrection opened for us a path to Heaven. St Paul affirms that Jesus is Lord, (1 Cor 12:3). And St Peter proclaims "There is salvation in no one else; for there is no other name under heaven that has been given among men by which we must be saved." (Acts 4:12)

Jesus ascended to Heaven in glory, and with the Father, sends the Holy Spirit – “the Lord and Giver of Life.” (Nicene Creed)  He is the life breath of the Body of Christ, the Church. He is the Paraclete or Advocate, whom Jesus promised the apostles. (Jn 16: 7ff.) He leads and preserves the Church in the Truth.

St. Hillary of Poitiers (d. 368 A.D.) writes of the Holy Trinity, “Nothing is wanting to this flawless union: in Father, Son, and Holy Spirit, there is infinity of endless being; the perfect reflection of the divine image, and mutual enjoyment of the gift. “  He is “one power, which brings all things into being, one Son, through whom all things come to be, and one gift of perfect hope. “ (from the Office of Readings, Friday of the Seventh Week of Easter)

But the Father, the Son, and the Holy Spirit is one God, not three:  eternal, almighty, all-knowing, all-loving; worthy of all praise.

From the love of this God we came into existence. For this love alone, and with the assistance of His grace, we can give the total gift of our self.  To this Triune God – and because of His mercy - we are meant to return, and to live in the eternal happiness which God has readied for us from before all time.

Glory be to the Father, and to the Son, and to the Holy Spirit; as it was in the beginning, is now, and ever shall be, world without end! Amen.

in opposition to the heresy of Arianism, this creed affirms:
1) the trinity of Persons in God and
2) the twofold nature, Divine and human,
in the one Divine Person of Our Lord Jesus Christ!

Whosoever will be saved, before all things it is necessary that he hold the Catholic Faith. For unless a person keeps this faith whole and undefiled, without doubt he shall perish everlastingly.

And the Catholic Faith is this, that we worship one God in Trinity, and Trinity in Unity, neither confounding the Persons, nor dividing the Substance.

The Father Eternal, the Son Eternal, and the Holy Ghost Eternal and yet they are not Three Eternals but One Eternal.

So the Father is God, the Son is God, and the Holy Ghost is God.  And yet they are not Three Gods, but One God.

So likewise the Father is Lord, the Son Lord, and the Holy Ghost Lord. And yet not Three Lords but One Lord. For, like as we are compelled by the Christian truth to acknowledge every Person by Himself to be God and Lord, so are we forbidden by the Catholic Religion to say, there be Three Gods or Three Lords.

And in this Trinity none is greater or less than Another, but the whole Three Persons are Co-eternal together, and Co-equal. So that in all things, as is aforesaid, the Unity in Trinity, and the Trinity in Unity, is to be worshipped. He therefore that will be saved must thus think of the Trinity.

Who, although He be God and Man, yet He is not two, but One Christ. One, not by conversion of His divinity into Flesh, but because His humanity was assumed to God.  One altogether, not by a mingling of substance, but by Unity of His Person.

For as the rational soul and flesh is one Man, so God and Man is one Christ, Who suffered for our salvation, descended into Hell, rose again the third day from the dead. He ascended into Heaven; He sitteth at the right hand of the Father, God Almighty, from whence He shall come to judge the living and the dead. At whose coming all men shall rise again with their bodies, and shall give account for their own works. And they that have done good shall go into life everlasting, and they that have done evil into everlasting fire.

This is the Catholic faith, which except a man believe faithfully and firmly, he cannot be saved.