Catholic Action Summit 2018 for Marriage and the Family

On November 2nd, 3rd, and 4th, Catholic Action for Faith and Family held its 2018 Marriage and Family Summit in Dallas, Texas under the auspices of Raymond Leo Cardinal Burke.

More than 500 people, including families, singles, students, seminarians, religious, and priests gathered together to delve into topics designed to nurture hope and strengthen our resolve in defense of Marriage and the Family; which is the incomparable fruit of marriage and, as His Eminence Cardinal Burke stated at the Summit, is the “little Church.” Amidst the attacks of secular society and the corruption of the Church’s teachings, the Catholic Action Summit highlighted the true nature of the family and provided practical insights for countering the many false solutions that are being presented to families. 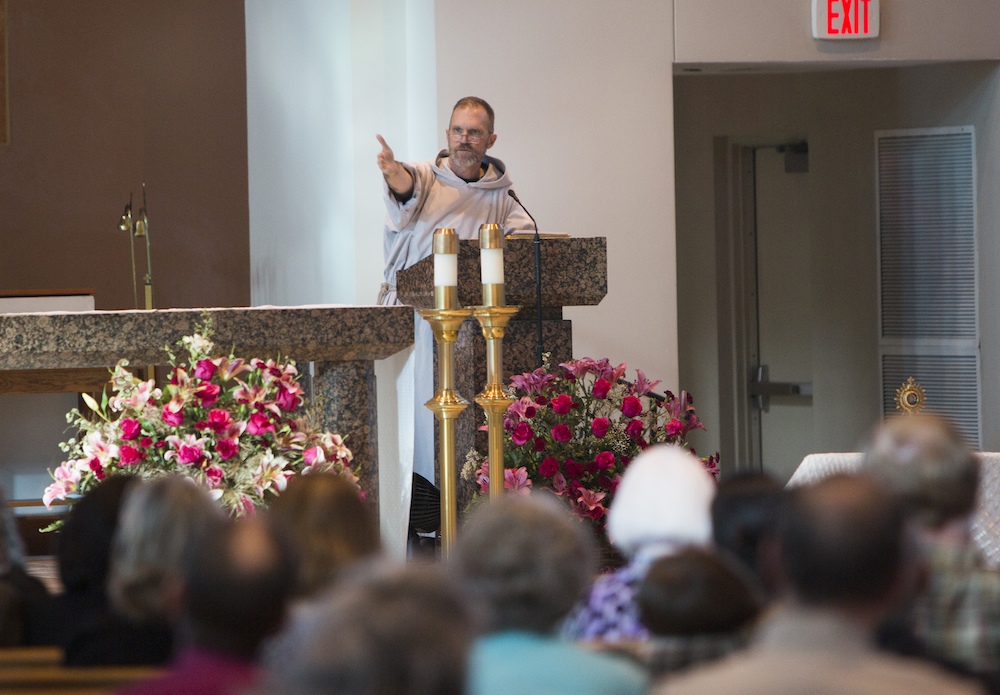 The Summit commenced on November 2nd, First Friday and All Souls Day at Mary Immaculate Catholic Church. Fr. John Anthony Broughton CFR, General Vicar of the Franciscan Friars of the Renewal, gave an address on Prayer & Christian Life in the Family: A Key Element of Evangelization. Using the example of his aunt and uncle who were happily married for 80 years, Father fleshed out the scriptural principles and practical actions needed for a holy and successful marriage. 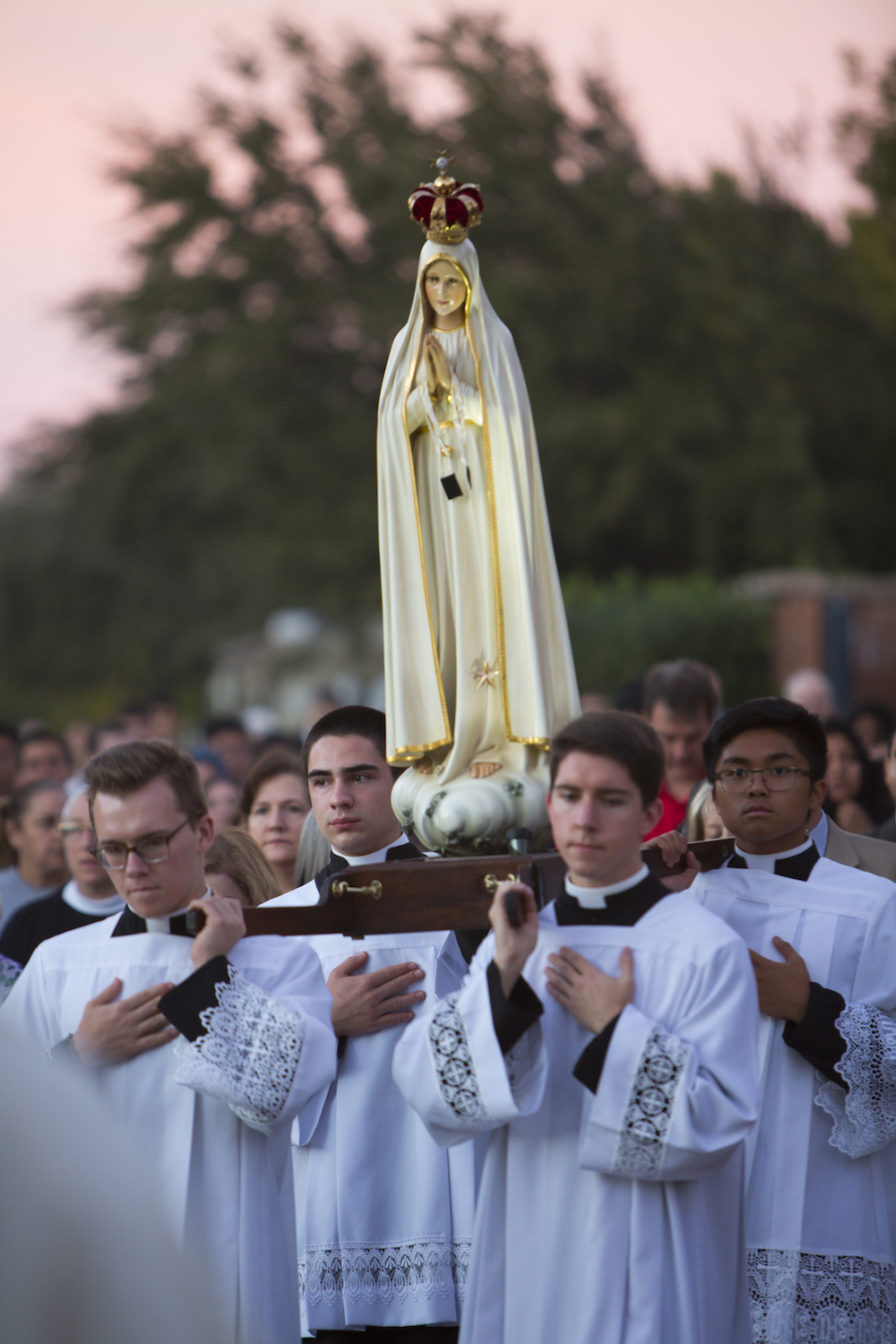 Following a Litany for the Souls in Purgatory and Holy Mass, the International Pilgrim Virgin Statue of Our Lady of Fatima was lovingly and publicly processed around the entire perimeter of Mary Immaculate Catholic Church, carried by seminarians and surrounded by voices rising with the form of prayer she urged us to pray daily: The Holy Rosary.

On Saturday, November 3rd, Summit attendees arrived early at the Irving Convention Center for breakfast, followed by a wonderful day of presentations by world renowned speakers. Thomas McKenna, President of Catholic Action and emcee of the Summit, welcomed attendees and highlighted what a blessing it was to unite with trustworthy clergy and speakers who will rally in defense of true marriage and family at any cost.

Holy Mass was celebrated by Cardinal Burke. The Sacrament of Confession was made available throughout the day. Cardinal Raymond Burke led the attendees in reciting the Holy Rosary, and First Saturday Devotions were prayed just before the evening mixer. 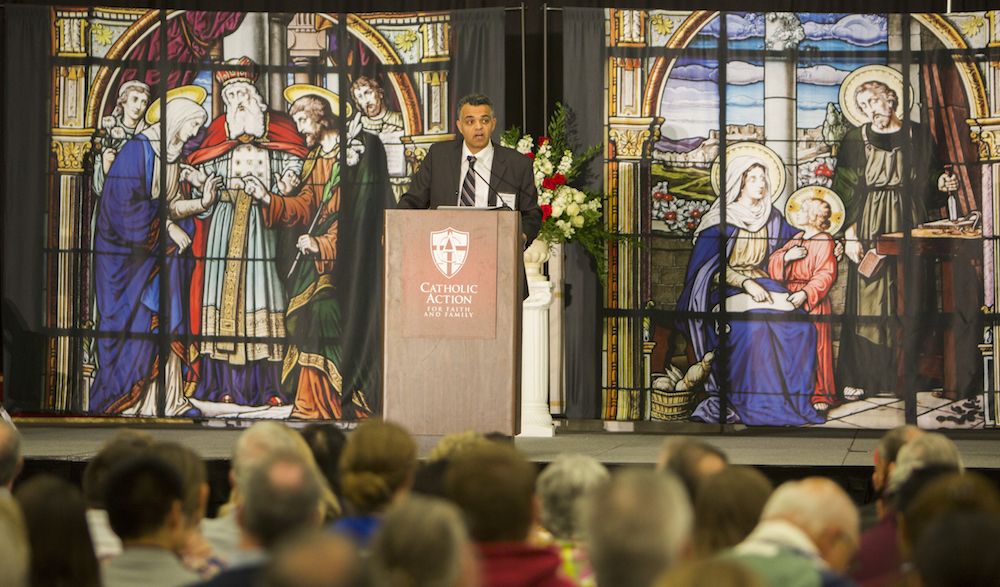 John-Henry Westen, Co-founder and editor-in-chief of LifeSiteNews.com, acknowledged the current crisis in the Church and in the Domestic Church, providing ways in which we can transform the crisis into an opportunity for heroic witness and evangelization. Both Charles LiMandri, President of Freedom of Conscience Defense Fund, and Karl Keating, Author, Apologist and Founder of Catholic Answers, advocated for a return to an acceptance of reality in their speeches. They skillfully directed Summit attendees to a matter of spiritual warfare prevalent in our age— gender theory: its agenda, its effects on the individual, and what should be our response as Catholics to it.

Holy Mass on Saturday was celebrated by His Eminence, assisted by seminarians who were sponsored for the event. The Mater Dei Choir of Men and Boys beautifully sung the sacred chants for this Mass, while the Mater Dei Latin Mass Choir graced the Summit with sacred polyphony for Sunday’s Pontifical Mass. 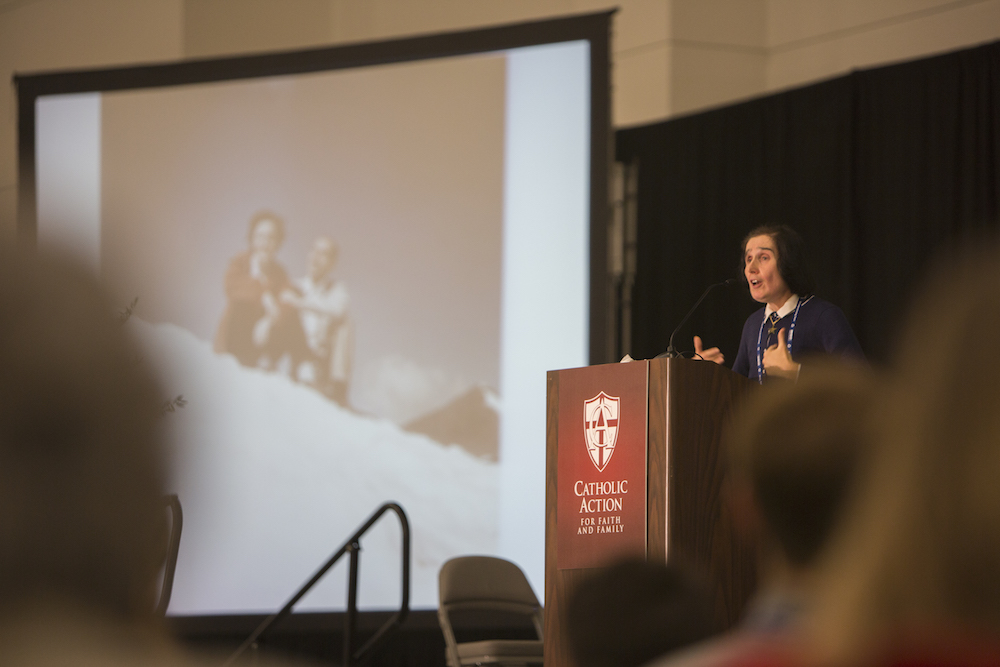 The highlight of the evening was the talk given by Dr. Gianna Emanuela Molla, daughter of St. Gianna, who shared an example of the Catholic Family, her own dear family, as an aid to others.

On Sunday, November 4th, Austin Ruse, President of the Center of Family and Human Rights, opened with an invigorating witness on the significance of the times in which we live. Many faithful Catholics may retreat to a nostalgic mindset, but Ruse reminded all with a brief and captivating history of significant events in the 21st century, that the eyes of the world are on the Catholic Church.

Next, David Carollo, Executive Director of the World Apostolate of Fatima, took the podium to discuss incremental changes in societal norms, Church teachings and devotional practices, as well as the redefinition of the roles of parents and clergy. He noted that the solutions to restoring proper order are living the Fatima message of reparation and restoring family structure. 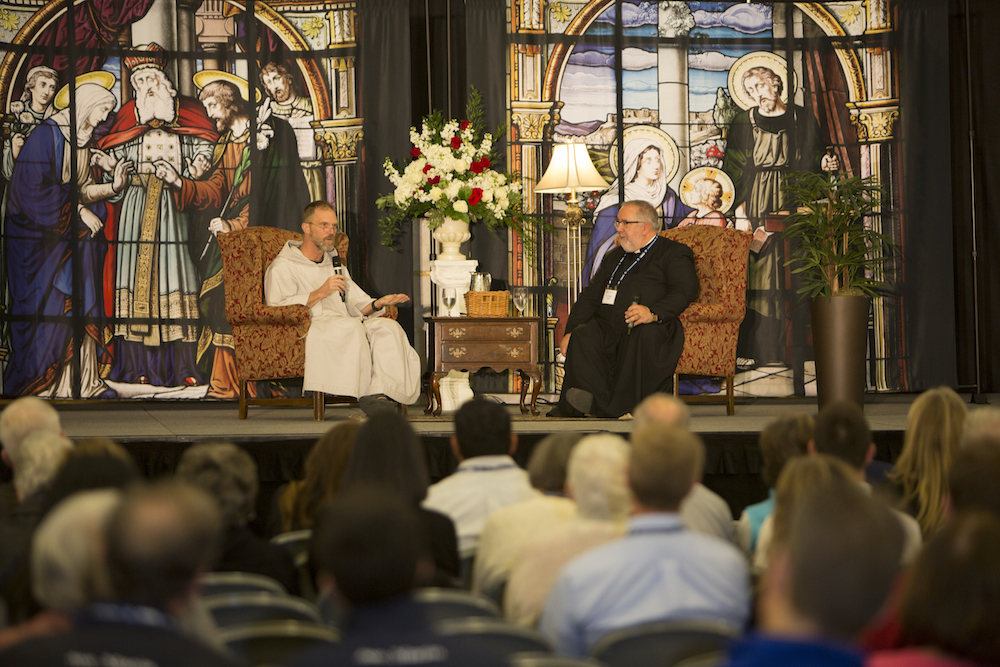 Besides the speeches, Question and Answer panels were eagerly sought after during the Summit, as attendees were given the chance to submit any questions they might have. On Saturday, Frs. John Trigilio and John Anthony, held a Q & A Expert Panel on the Sacrament of Confession. Apologetical questions concerning valid confessions, the seal of confession, and possible government attempts to break the seal, were answered with knowledge and precision. 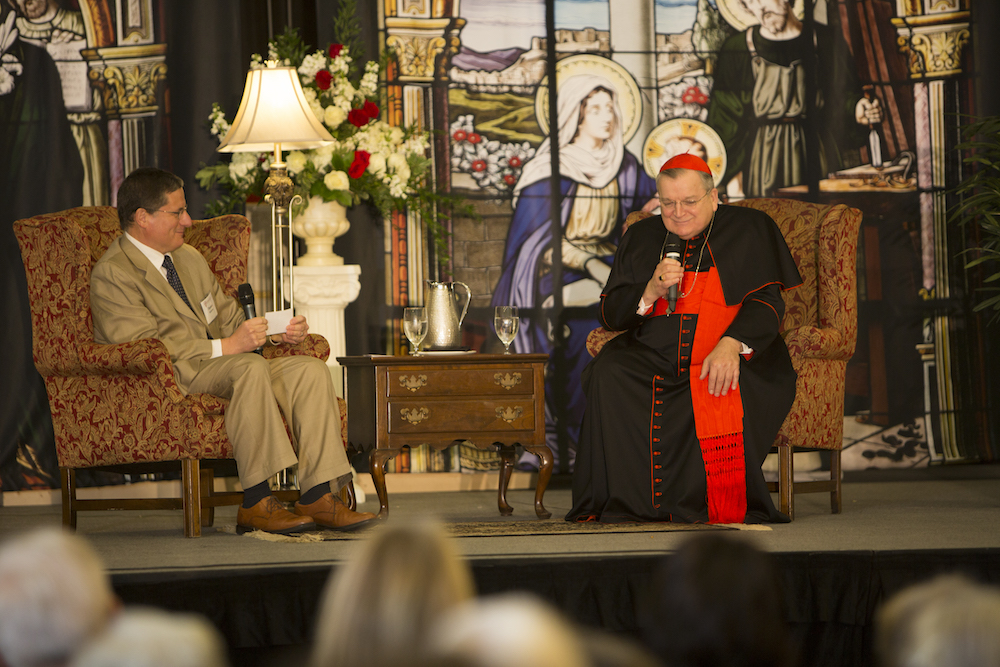 Summit Attendees also flocked to Cardinal Raymond Burke’s Q & A Session on Sunday, which he kindly held just before celebrating a Pontifical Mass. Inquiries on a wide range of subjects, from the recent scandals in the Church to more personal questions about spiritual writers who influenced His Eminence, were graciously answered with straightforward responses.

Following the Sacred Liturgies, all were treated to a grand Banquet Luncheon in the Grand Ballroom. Even the Chef at the Irving Convention Center was so moved, that he requested His Eminence to bless the kitchen. 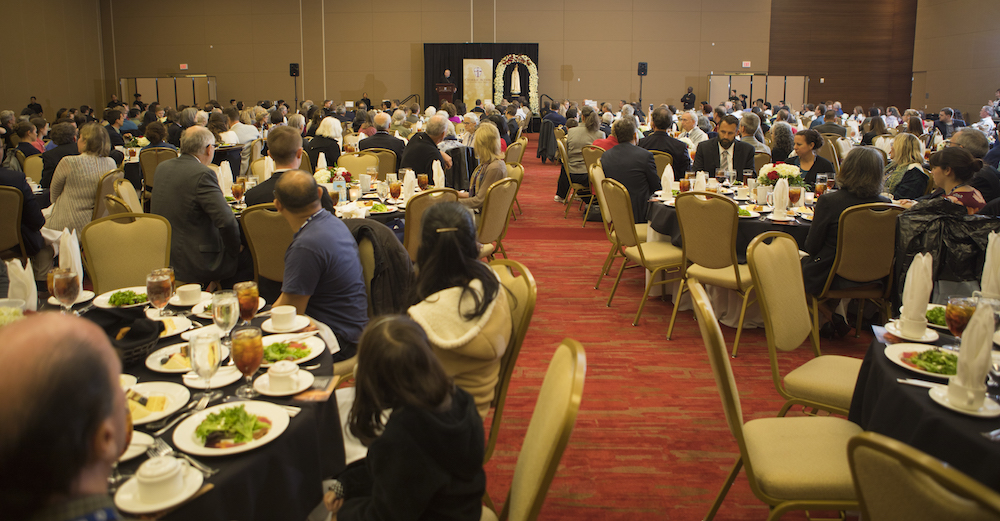 As a memento of the weekend’s events and the call to holiness, Summit attendees were gifted with an examination of conscience designed for families, a brown scapular, and individual prayers for the family and the clergy. Guests also left with enlightening Catholic resources and beautiful religious items from vendors such as EWTN, Shrine of Our Lady of Guadalupe, Madonna Arts, and many others.

Overall, attendees were left with the impression that amid the crisis within the Church today, the family has a great mission to accomplish. Sr. Lucia dos Santos of Fatima predicted: “The final battle between the Lord and the kingdom of Satan will be about marriage and the family.” We must turn with constant hope to Christ and Our Lady.

We would like to thank all who made this event possible, including His Eminence Cardinal Raymond Burke, our speakers, clergy, seminarians, students, volunteers, and families.