Cardinal Raymond Burke was named a bishop in his home diocese, La Crosse, Wisconsin in February of 1995. While serving as the bishop there Cardinal Burke, at the time Bishop Burke, felt inspired to build a shrine to Our Lady of Guadalupe, patroness of the Americas. He wanted it to be a place of pilgrimage for the faithful in the United States to honor Our Blessed Mother. 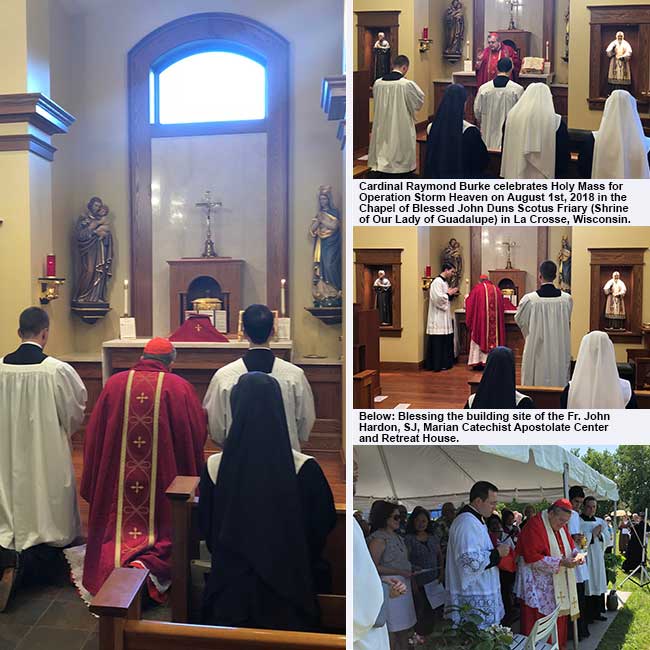 It took many years of preparation and planning and the shrine was inaugurated on July 31, 2008. Since then thousands and thousands of people have visited the shrine and it has served has a source of inspiration and blessings for many. I attended the inauguration 10 years ago and this year returned to join Cardinal Burke in celebrating the 10th anniversary. It was a joyous event and very inspiring. There were two other cardinals and a bishop present along with over 30 priests and a great number of religious. The shrine church was full. The main ceremony was a solemn Mass of thanksgiving for 10 years of blessings. 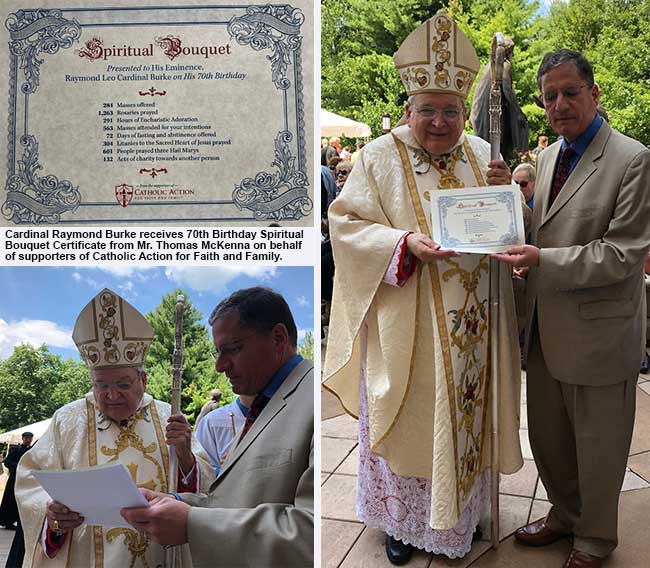 Following Mass I had the opportunity to present Cardinal Burke with the spiritual bouquet that Catholic Action organized for the occasion of the cardinal’s 70th birthday. He expressed his profound gratitude for the offering of so many Masses, rosaries and other devotions. He sent me a note and asked that I convey his gratitude to all those who participated.

The next day was the 1st of August and I joined His Eminence for Holy Mass which was offered for all the participants of Operation Storm Heaven. See pictures above.

On August 13th, I was also with Cardinal Burke for the ceremonies to commemorate the August Fatima feast day at the World Apostolate of Fatima’s national shrine in Washington, New Jersey. Cardinal Burke lead all of the faithful in the Holy Rosary and celebrated Mass. I was able to address the crowd about the history of the International Pilgrim Virgin Statue based on my book The Fatima Century published by Catholic Action last year.