Remember Who You Are - Catholic Action For Faith and Family

When we were kids, and we were going out to friends or dinner, my Mother would say, “Be good!” When we were older and going out on our own, she would say, “Remember who you are,” we knew that that meant we should be “good,”  respectful , and not bring embarrassment on the family name.

In high school, at the end of a Pep Rally before a big game, the principal might remind students that the school colors they wear, or the school jacket, identifies them to others; they need to act like fit representatives of their school. Remember who you are.

Who are we?  We are children of the Heavenly Father. We have the dignity of His sons and daughters.

The Catechism of the Catholic Church (no. 1700) teaches, “The dignity of the human person is rooted in his creation in the image and likeness of God; it is fulfilled in his vocation to divine beatitude.”  Created in God’s image, we are meant to live according to a well-formed conscience as children of God whose destiny is heaven. This calls us to act differently. 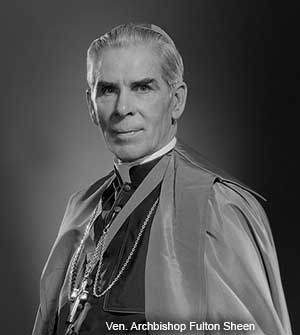 The analogy has been made, by Archbishop Fulton Sheen and others, between the Priest who doesn’t wear his Roman collar, and the man who takes off his wedding ring. Neither the collar nor the ring cause us to be faithful, but they are a reminder to the man of who he is, and of the binding commitments he has made. They are a signal to others that this man is ‘taken.’ People would be justified in expecting him to act in a “priestly” manner, or in the way of a faithful and chaste spouse – all without suppressing his cheerfulness, his legitimate interests, and the other elements of his God-given personality.

We may not have any such signs: a ring, a collar, or a school insignia, that mark us out from others. Nonetheless we act as baptized disciples of Jesus Christ; we must live differently in supernatural faith, hope, and love. 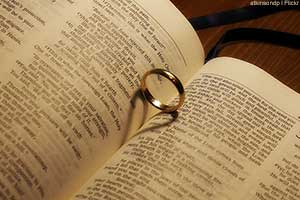 “By his deliberate actions, the human person does, or does not, conform to the good … attested by moral conscience. … With the help of grace, [human beings] grow in virtue, avoid sin, and if they sin they entrust themselves … to the mercy of our Father.” (CCC no 1700)

There is a parable in St. Matthew’s Gospel, about a King who gave a wedding banquet for his son. The invited guests declined to come, and finally he sent his servants out into the streets to gather anyone they could find. 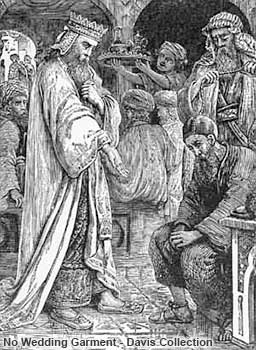 Matthew 22: 11“But when the king came in to look at the guests, he saw there a man who had no wedding garment. 12 And he said to him, ‘Friend, how did you get in here without a wedding garment?’ And he was speechless. 13 Then the king said to the attendants, ‘Bind him hand and foot and cast him into the outer darkness. In that place there will be weeping and gnashing of teeth.’ ”

I always thought, “This poor fellow; what did he do wrong?!” Perhaps he might be for us an example of one, who has ‘a wedding garment,’ but purposely takes it off, and sets it aside. He declines to live according to the charity given us in Baptism. We are baptized into Christ and into the life of the Church. Do we live that way? Or do we lay aside our faith, our responsibilities and commitments to live a different life? Perhaps we are living a “double life;’ One that pretends to free us from the expectations proper to our dignity as a child of God.

Let us remember who we are.

Do you renounce Satan?

And all his works?

And all his empty promises?

Do you renounce sin so as to live in the freedom of the children of God?