Named in honor of France’s King Louis IX, a Spanish ally, Mission San Luis Rey is nicknamed King of the Missions. Its beautiful church façade is a perfect example of late mission architecture. As we headed to the Mission’s expansive grounds, we did so without the rolling billboard, as it was waiting for a mechanic to fix it back in Carlsbad, CA. Although we had the GPS on our iPhones working well, we enjoyed being guided by one of the 585 mission bells located on the highway markers commemorating the “Historic El Camino Real” across the state.

So, with festivities scheduled to kick off at noon, we arrived just in time. Anthony stopped to pick up the Pilgrim Virgin Statue and chauffeur her in his convertible. Evidently, she wanted to enjoy San Diego’s wonderful climate. Although today, we were having a heat wave. 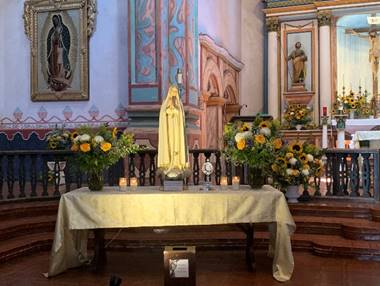 Father Vincent ‘Vince’ Mesi planned a full day with a scheduled 12:00 PM Labor Day Mass and a special evening Mass. Fr. Vince presided over both Masses and in his homily spoke about Our Lady of Fatima and how grace is the key to falling in love with God. The Knights of Columbus were in full force for the nine-hour visit and State Advocate, Rene Trevino, drove up to give a word of encouragement and thanks to the Brother Knights for their hard work and dedication. A special shout out to the altar society who created a beautiful setting worthy of Our Lady’s visit.

As mentioned, our visit began at the scheduled noon Mass. I heard from Thomas McKenna that Our Lady of Fatima brings people out. True to form for a Monday, the parish was packed. Since coming to Mission San Luis Rey in 2016, Fr. Vince has brought many gifts to this community, especially his deep love for the Liturgy and liturgical music. This was particularly evident later in the evening, when Father Vince celebrated a second Mass planned especially for the visit of the Pilgrim Statue.

From the pianist and vocalist to the lighting and flower arrangements, the ambience and the reverence was just perfect. 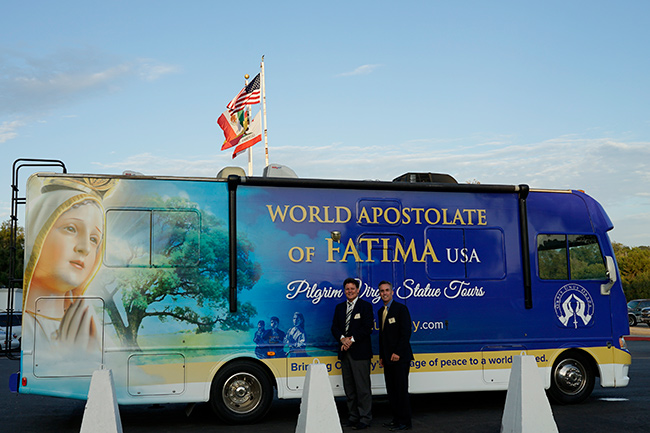 After the evening ended, the faith community hovered around the courtyard to watch a beautiful sunset, taking photos together and with the Rolling Billboard.  We noticed a California flag blowing in the wind and if we were lucky, we would have one captured with the flag visible and fitting of our mission to revitalize Christianity back to California. The odds were low, but since we invoked the intercession of St. Junípero Serra to aid us in this endeavor; well, the photo is worth a thousand words. 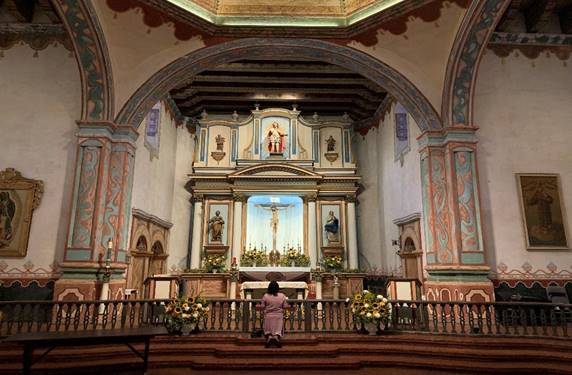 Finally, after everything winded down, I peeked inside the mission church and captured what is one of my favorite images so far of this tour; a woman who I’d seen much earlier still praying solely as long as the doors remained open. 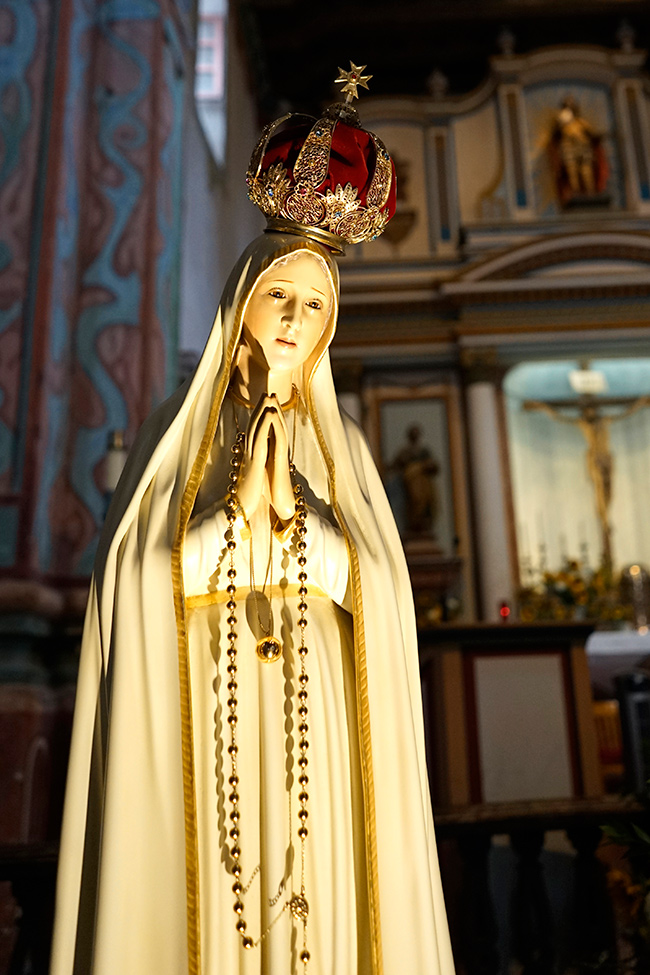 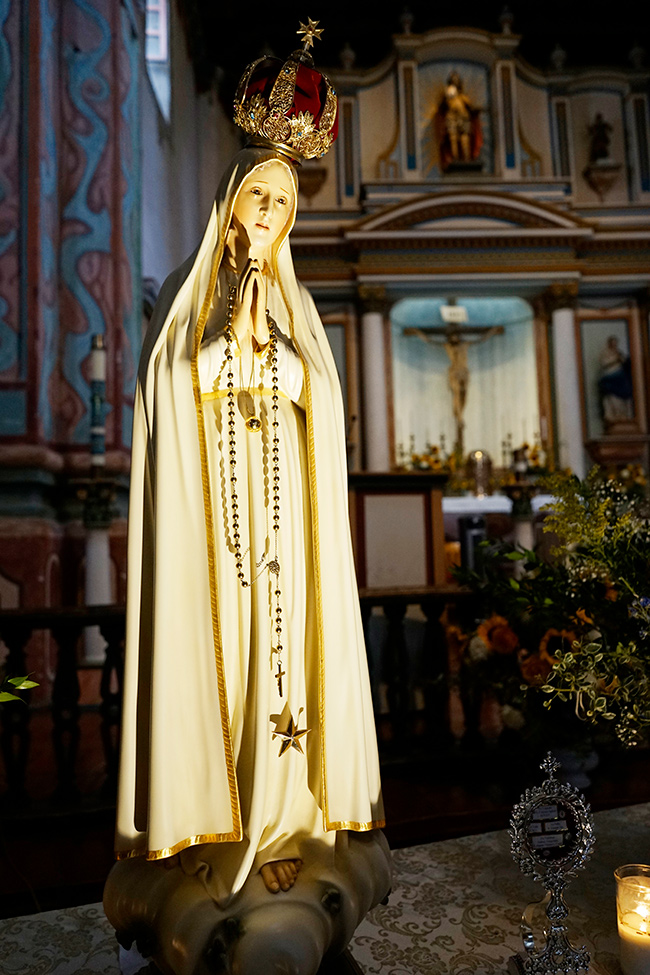 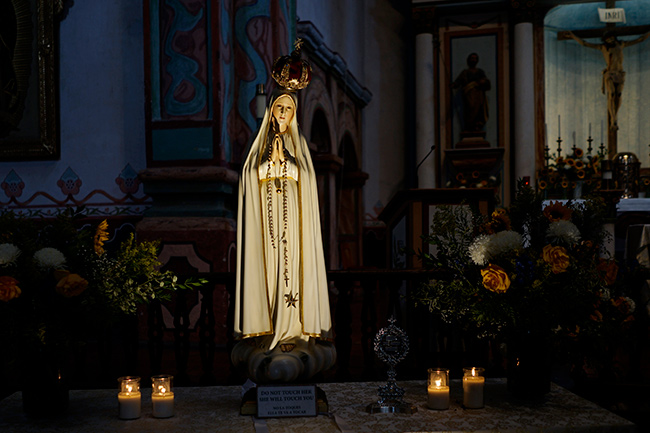 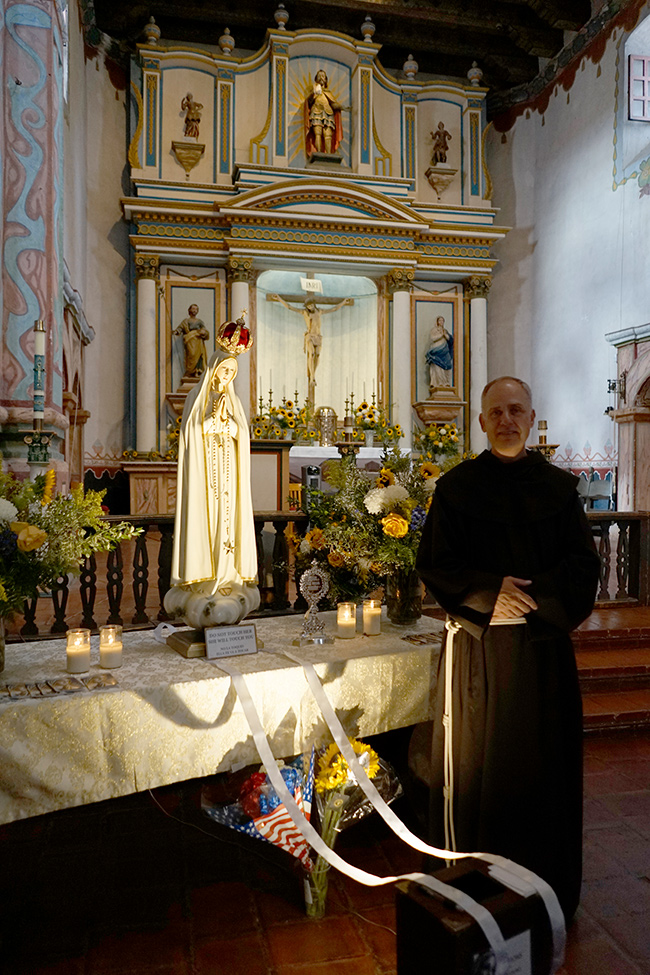 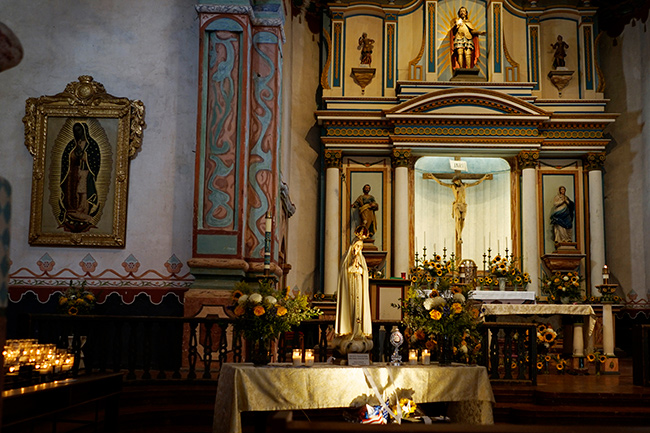 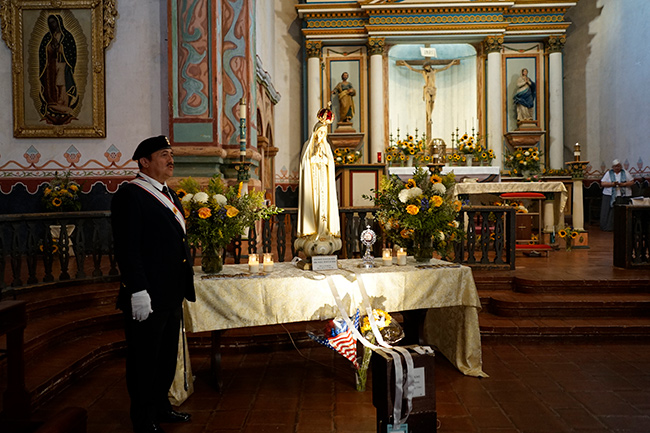 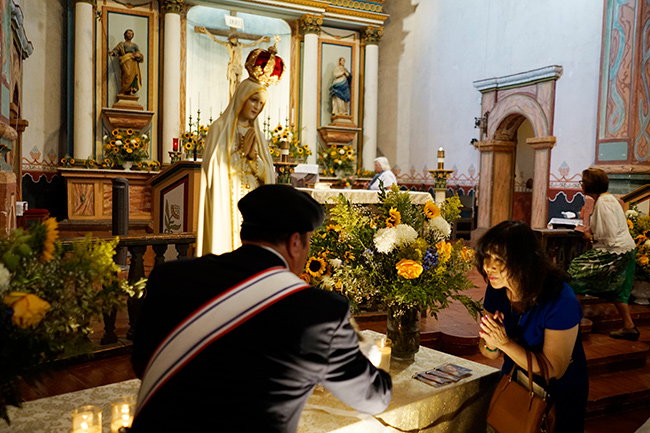 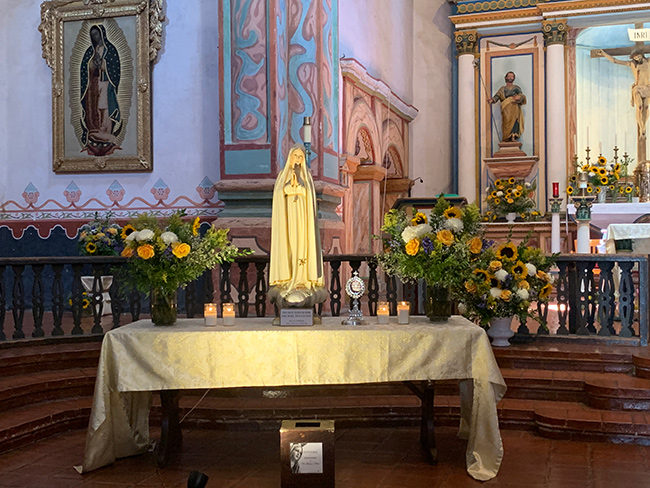 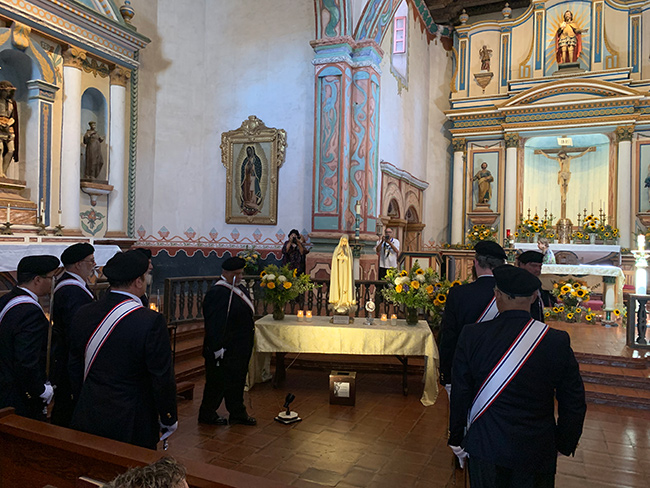 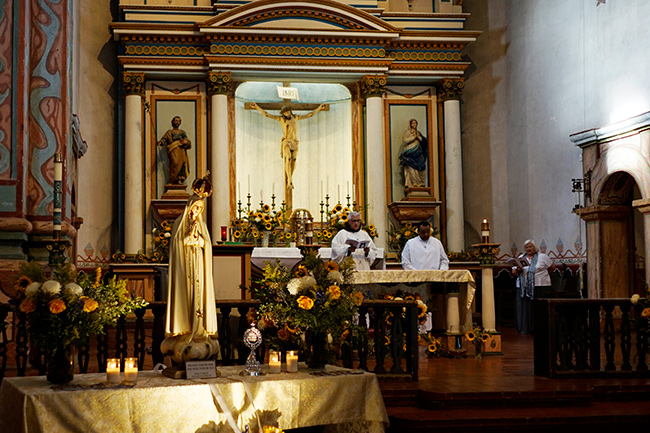 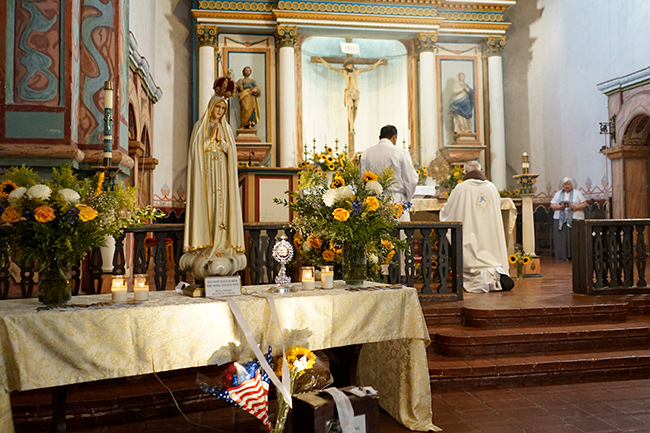 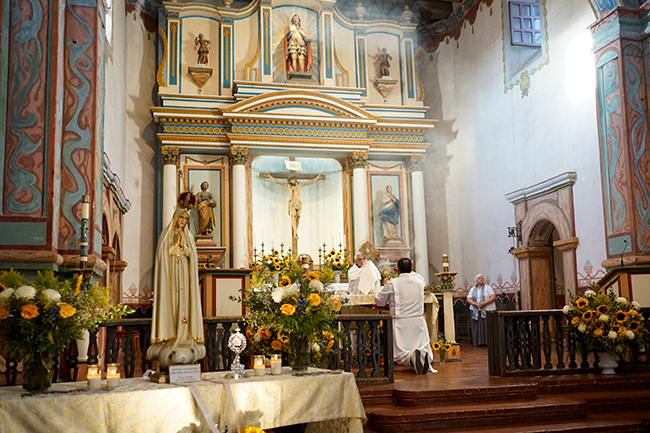 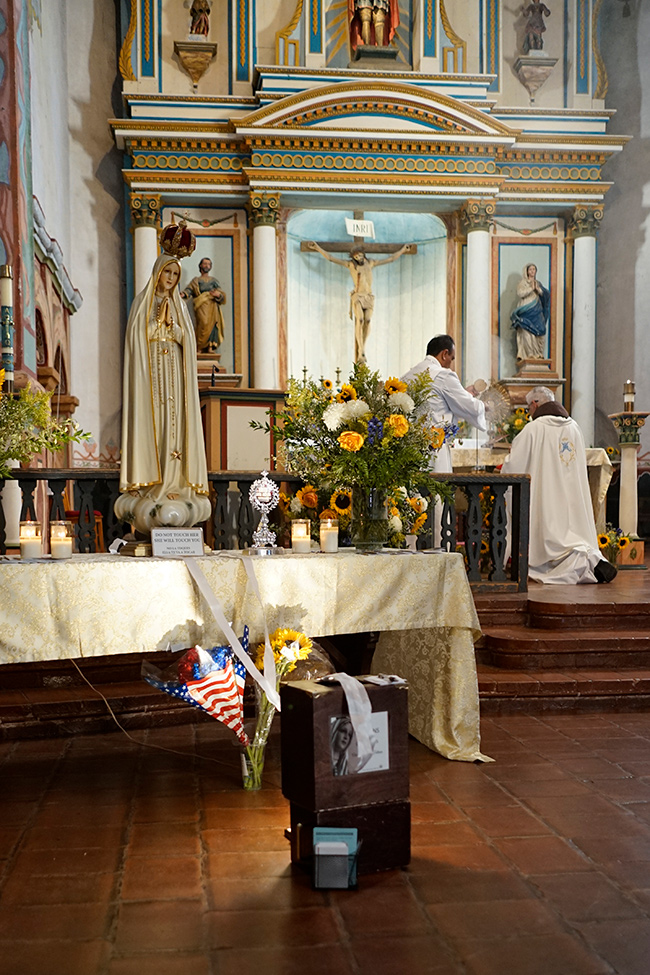 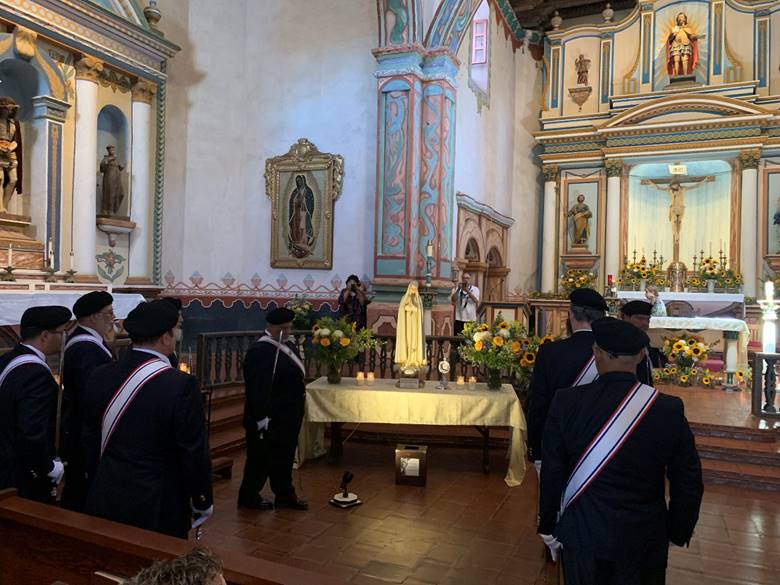 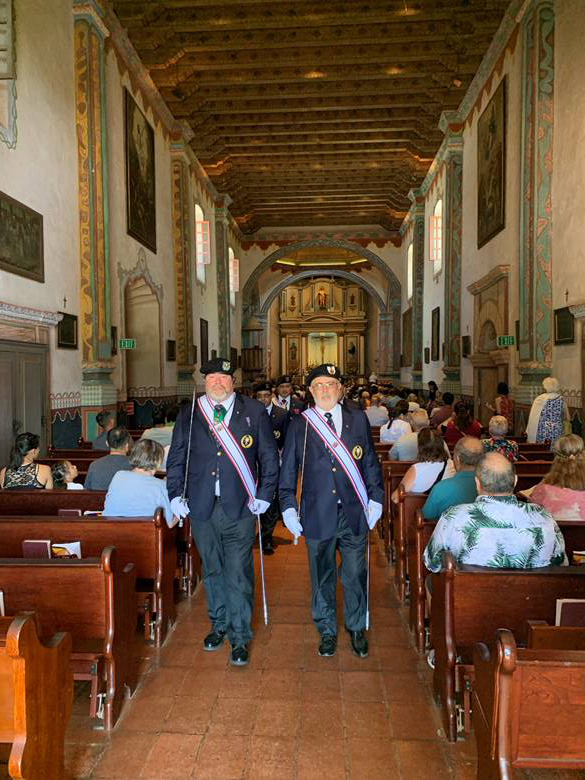 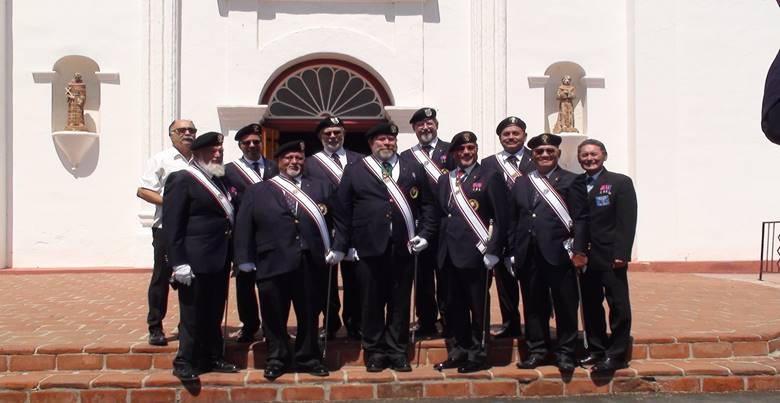