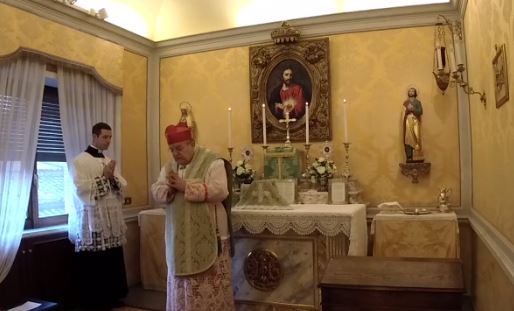 The year 2019 marks the 250th anniversary of the Portolá Expedition which brought the Catholic Faith to California. A new trek termed the “Portolá 250” set out the eve of August 31st to bring Catholics together across California to commemorate this anniversary of the founding of the 21 California Missions with a modern-day road trip from August 31-September 22. 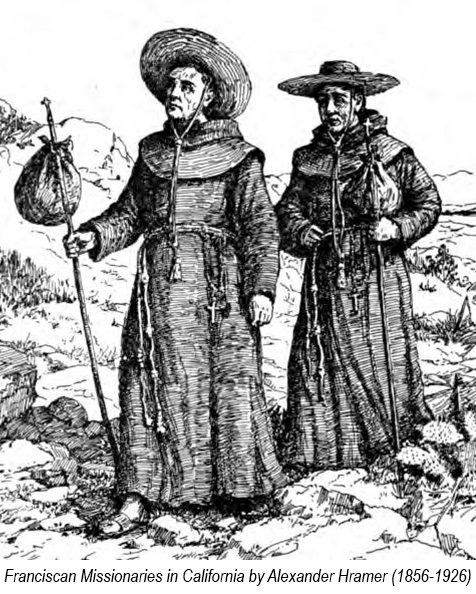 The goal of the project is to revitalize Christianity in California with the same fervent spirit as those early missionaries.  When reading the writings of St. Junípero Serra, we can see and are inspired by his desire throughout his life to be a missionary to convert people to the Gospel and as a priest, to baptize the world. He truly believed that outside the Catholic Church there is no salvation. He took seriously to heart the command that Our Lord Jesus Christ gave to His apostles, “Go into the whole world and proclaim the gospel to every creature” (Mark 16:15). 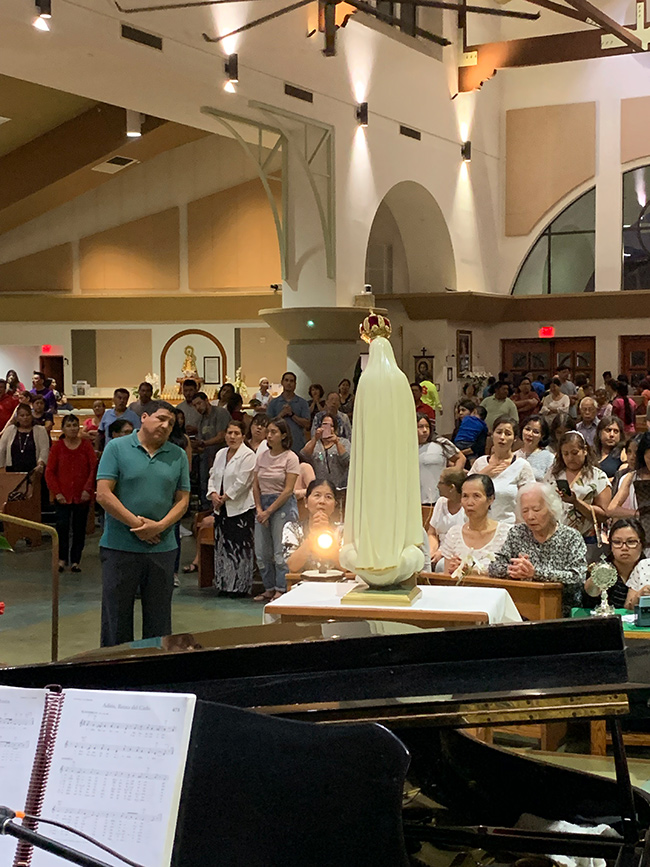 To strike just the right balance with a zeal that has reached the level of a burning desire, Sunday’s Gospel Sep. 1 set the tone just as the missions tour commenced by dealing with loving our neighbor in the story of the Good Samaritan, a parable to help us understand better the two great commandments, to love God above all things and to love our neighbor as ourselves. I, along with my friends and colleagues, Thomas McKenna, who is the Founder of Catholic Action for Faith and Family, and Anthony DeBellis, co-architect of the Portolá 250 missions tour, have spoken in detail about the challenges in achieving this balance with having a fervent spiritual zeal. This is poignant as we look to combine the 250th anniversary of the Portolá Expedition with a pilgrimage to visit all the missions with the world-famous International Pilgrim Virgin Statue of Fatima.

Also, on the eve we deployed ourselves on the pilgrimage, Thomas McKenna called my attention to a beautiful homily given by His Eminence, Raymond Cardinal Burke, about the Portolá 250 pilgrimage. Thomas had spoken with Cardinal Burke the day before the program began and told him about the initiative. Cardinal Burke was very pleased and made it the topic of his homily the following day, September 1, during his monthly Operation Storm Heaven Mass. 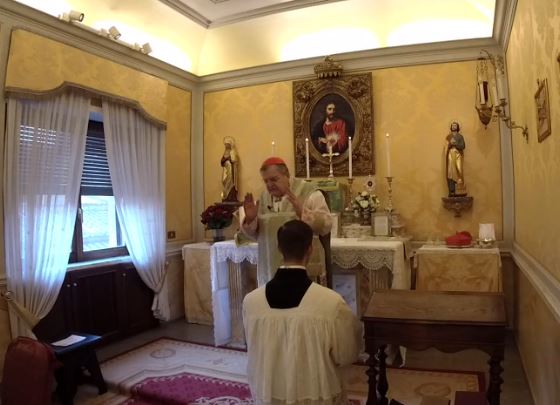 From Rome during the Operation Storm Heaven Event, the Mass celebrated by Cardinal Burke was powerfully streamed live across the world from his private chapel to more than 150,000 Rosary Warriors. The Mass was said in Latin by Cardinal Burke who also gave a homily and blessing in English, giving great significance to the purpose of the pilgrimage and for the organizers who just began earlier that day to retrace St. Junípero Serra’s steps in California. Setting a clear context of the Good Samaritan, Cardinal Burke instructs that love of neighbor is perseverant, has no boundaries, and extends to every man without discrimination. This love constantly goes beyond the call of duty without hesitation and without request for the person needing care to qualify with merit.

Stating we cannot expect to love in the nature of the Good Samaritan, nor love our neighbor as we love ourselves if we only rely on ourselves, His Eminence goes on to ask: “How then can we love in this way as human beings, how can we be so generous in our love so we can accomplish this command Our Lord gives us?” He comments on what St. Paul taught us from the epistle in the second reading about how to love. In summary, we can indeed accomplish this love and be sustained by it when we realize it is Christ Himself who gives us this love; it is Christ Himself acting in us. 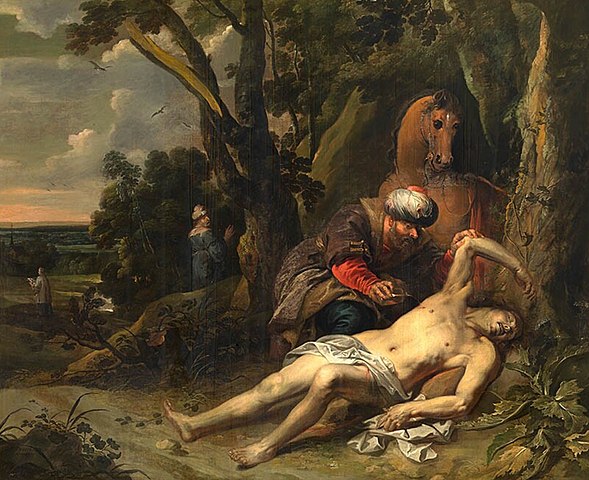 His Eminence segues to an expression of the love of the Good Samaritan who cares for his neighbor and is concerned with their eternal salvation by remembering a Pilgrimage to the missions in California that begins on the same day of the Operation Storm Heaven Mass. These missions were founded by Saint Junípero Serra 250 years ago and this work was continued by his confreres to establish 21 across the state. Describing the many cities, towns, and places in California that bear the names of either the saints, Our Blessed Mother, or Our Lord Himself, Cardinal Burke cites in a particular way that the state capitol of Sacramento is named after the mystery of the Blessed Sacrament.

Commemorating this inspiring work by St. Junípero Serra, who went forward with the sole motivation to bring all souls to eternal life, Cardinal Burke suggests, “We are called then to make new that work begun 250 years ago.” His Eminence then gave a blessing for California and prayed for the organizers of the pilgrimage and in particular, the efforts of the Knights of Columbus who have deployed statewide, Catholic Action for Faith and Family, Legion of Mary, the World Apostolate of Fatima, The Blue Army, and many more local volunteers at each visit location. 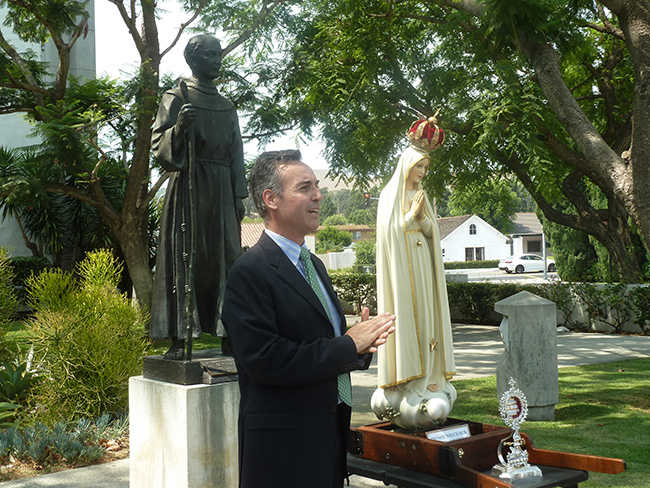 It is with this prayer we set out on this journey, keeping in mind we have a single agenda to beseech Our Lord Jesus to revitalize Christianity in California once again through the intercession of Saint Junípero Serra, and by asking Our Lady of Fatima to shower her graces on all the dioceses throughout California and on individuals and families everywhere.  “The work of being missionaries of the Gospel never ends,” said Barb Ernster, Communications Manager for World Apostolate of Fatima, USA.  “In every era of Christian history, we are called to give voice to the love and revelation of Jesus Christ. Our Blessed Mother is the greatest example of a faithful missionary and evangelizer,” she said.

“We are so thankful to Cardinal Burke for his homily about this pilgrimage which is so important because it provides an extraordinary occasion for millions of Catholics in California to pray for hope and healing for our great state,” said McKenna, who joined the pilgrimage in Pasadena Saturday, September 7th for a Rosary at Mission San Gabriel at noon and an extended overnight visit at St. Andrew Catholic Church in Pasadena with the local parish community, Knights of Columbus color corps, Knights on Bikes, and of course the pilgrims processing in with the Pilgrim Statue. 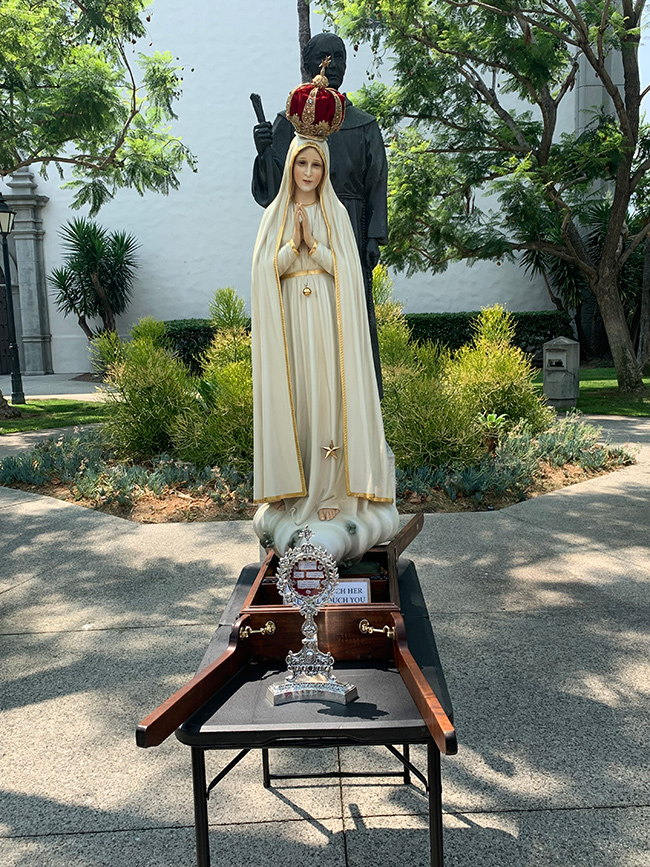 “Mary appeared at Fatima as an ambassador of hope from God,” said McKenna, “and one of the great messages she revealed was that, despite all the challenges and hardships, ‘In the end, my Immaculate Heart will triumph.’”

Not only is Cardinal Burke’s homily a must-hear, it is a vibrant reminder of the missionary zeal we are all called to in some way. If we can come together to answer this call in the same spirit as the Good Samaritan, we will create a ripple effect that changes neighborhoods and nations.