Marriage is Forever - Catholic Action For Faith and Family

God’s call to us as human beings – our “vocation” - involves giving our self completely and forever in a lasting commitment.

Indeed the first great commandment of the Old Testament – repeated in the Gospel - is expressed in this way: “Hear, O Israel, the Lord is our God, the Lord is One. You shall love the Lord your God with all your heart, with all your soul, and with all your might.”  (Deut 6: 4-5; Mt 22: 37; Mk 12: 29-30) God wants everything from us, and love is fulfilled when we give everything.

Priests are ordained forever. Consecrated Religious make perpetual vows. Married couples also promise themselves to each other “until death.”  The Catechism of the Catholic Church speaks of the irrevocable bond, “… established by God Himself in such a way that a marriage concluded and consummated between baptized persons can never be dissolved. “ (Catechism of the Catholic Church. no. 1640) 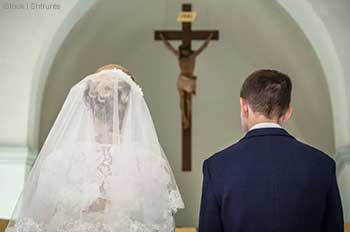 Without this commitment – of the man and woman’s complete self, for the entirety of their lives – marriage is a social arrangement for a time. In God’s plan, marriage or “Holy Matrimony” deserves and requires the complete gift of self, mutually, and forever.

Sadly, divorce has been and remains a tragic reality. Divorce can happen when couples give up on the hard work that life-long marriage demands. Because marriage is always a mutual commitment, sometimes one of the spouses “walks away,” through unrepentant infidelity, or some other refusal to keep their vows and to maintain the home as a communion of life and love for the couple and for the children.

Because of the widespread recourse to divorce in society, and because courts have made so-called “no fault” divorce – the granting of divorce for any grounds - so readily attainable, we sometimes forget the serious sin and the lasting and intense hurt which results from this rupture of the permanent bond of marriage.

“Divorce is a grave offense against the natural law. … It does injury to the covenant of salvation, of which sacramental marriage is the sign.” “Divorce also introduces disorder into the family and society.  … [it] brings grave harm to the deserted spouse  …  who may be an innocent victim of a divorce decreed by civil law; …. and to children traumatized by the separation of their parents.” (CCC. nos. 2384, 2385, 2386).

There are circumstances in which a “Decree of Nullity” (an annulment) may be sought from and granted by the Catholic Church. Examining the particular dispositions of the husband and wife at the time they entered into marriage, and in light of the necessary elements for valid matrimonial consent, the Diocesan marriage tribunal may find that there was something substantive lacking at the time of the marriage. 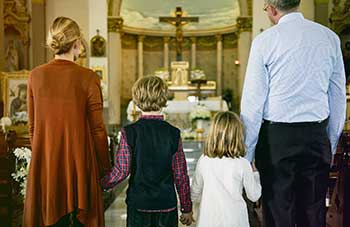 Nonetheless, the break-up of a marriage and family inevitably causes great hurt to spouses, to their children, and often to the society, which is plagued by divorce’s contagious effect. (CCC. no. 2385)

The Catechism is also clear that the choice to contract a new union adds to the gravity of the offense of divorce. “If the divorced are remarried civilly, they cannot receive Eucharistic Communion as long as the situation persists.” They cannot approach Confession unless they are repentant of the invalid marriage, and commit to living in complete sexual continence. (CCC. no. 1650) This prohibition against receiving the sacraments is based on Jesus’ own words affirmed in the Catechism, “Whoever divorces his wife and marries another, commits adultery against her; and if she divorces her husband and marries another, she commits adultery.” (Mk 10:11-12, quoted in CCC. no. 1650).

These prescriptions of the Church serve to protect the indissoluble integrity of an authentic marriage, and emphasize the grave harm – spiritual and otherwise – that the abandonment of Matrimony causes. Experiencing the serious hurt of divorce can cause us to see more clearly the powerful love and grace that Jesus Christ intended by His institution of this Holy Sacrament. It is a call from God. It is a way to holiness and a path to heaven. It is the place for the procreation, loving nurture, and sanctification of children.

Living faithfully in mutual love is something that requires that the husband and wife give themselves completely, “to have and to hold, from this day forward, for better, for worse, for richer, for poorer, in sickness and health, until death do us part.” The partners, even though they can never foresee what challenges may come, solemnly commit themselves to life-long love.

Sanctified in Jesus Christ, couples and families look, in faith, to the irrevocable love of God. “By their own faithfulness – and supported in the community of the Church - they can be witnesses to God’s faithful love.” (CCC. no. 1648)

“Conjugal communion is characterized not only by its unity but also by its indissolubility: ‘As a mutual gift of two persons, this intimate union, as well as the good of children, imposes total fidelity on the spouses and argues for an unbreakable oneness between them.’ (Gaudium et Spes, no. 48)

“It is a fundamental duty of the Church to reaffirm strongly, as the Synod Fathers did, the doctrine of the indissolubility of marriage. To all those who, in our times, consider it too difficult, or indeed impossible, to be bound to one person for the whole of life, and to those caught up in a culture that rejects the indissolubility of marriage and openly mocks the commitment of spouses to fidelity, it is necessary to reconfirm the good news of the definitive nature of that conjugal love that has in Christ its foundation and strength.

“… Just as the Lord Jesus is the ‘faithful witness,’ the ‘yes’ of the promises of God and thus the supreme realization of the unconditional faithfulness with which God loves His people, so Christian couples are called to participate truly in the irrevocable indissolubility that binds Christ to the Church His bride, loved by Him to the end. (FC, 20)