The Preeminent Role of Music in Divine Worship

What is the difference between “praise and worship” music and the sacred music traditions of the Catholic Church? Should we applaud in church when the music is particularly moving? Is liturgical music meant to move our emotions or enhance the words and prayers of the liturgy?

These are questions that touch our lives every time we go to Mass, and our panelists answer these questions with remarkable insight. 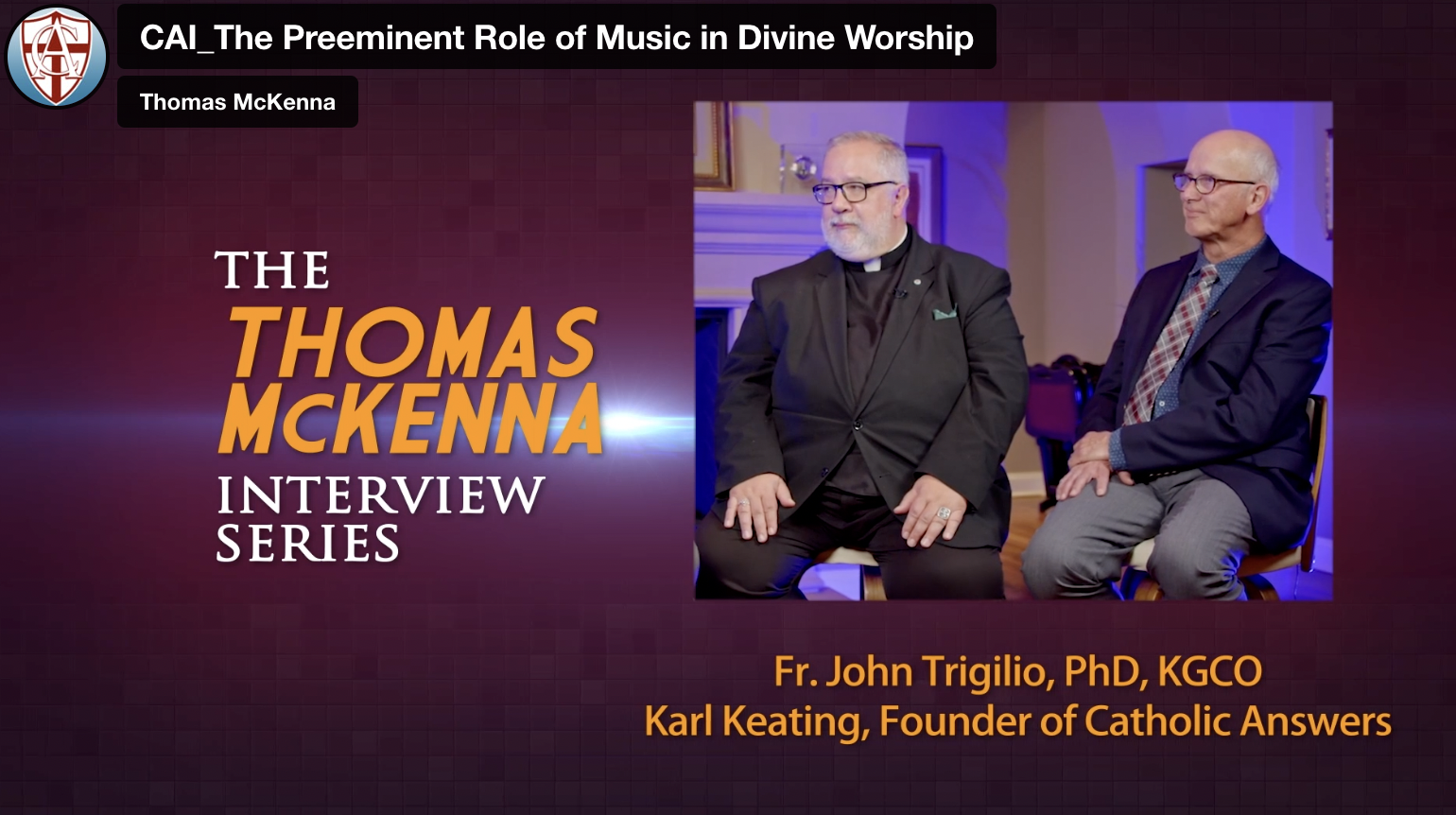 The Eucharist is the highest form of divine worship we can experience on this earth, and music has always been an enhancement to the formal words of the Mass. Sacrament, word, and sacred music together unite us to the rest of the believing Church, not only the universal Church in our day but to the entire mystical Church throughout space and time.

Unfortunately, even Catholic worship has in some ways been affected by the modern day phenomenon of “megachurches” where there is little scripture, little actual preaching of the Gospel, and lots of entertaining music. But this model is not the authentic way for Catholics to worship.

We worship God out of justice, not for entertainment. Worship is due to Him because He is God. This means that lack of preparation, liturgical sloppiness, lack of devotion, and secular entertainment models of worship are foreign to the Catholic experience of Mass.

In essence, the proper understanding and practice of sacred music are more important for our worship today than ever before, since faith is so watered down and catechesis is so weak. Simple practices like arriving at Mass early, preparing one’s heart through the readings, proper attire, and remaining for the final blessing at the end of Mass make great contributions to our experience of divine worship.

But we can never underestimate the preeminent role of good sacred music in divine worship: it helps us worship like the angels who constantly sing God’s praises in heaven.

Exploring the Sacrificial Essence of the Priesthood

What is a priest? That is the question that Thomas McKenna asks our panelists Fr. John Trigillio and Karl Keating in this amazing interview about the sacred and sacrificial nature of the Catholic Priesthood. It is a question to which the Church gives a clear answer even in times of confusion such as ours. 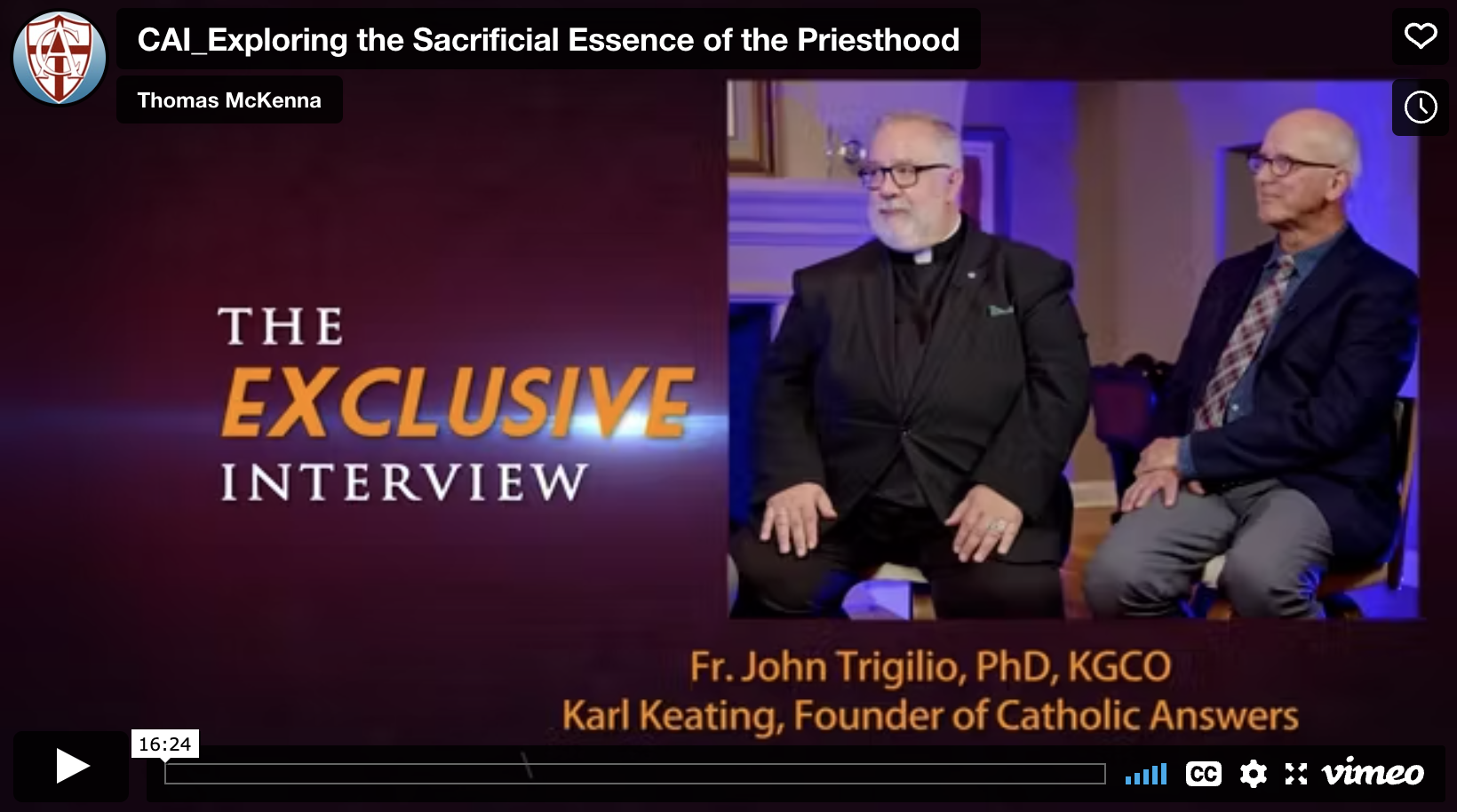 At its core, the priest is an alter Christus, “another Christ” who serves others not just in active ministry but with his very being. This is the difference between a Catholic priest and a minister in a denomination without an ordained priesthood. As Fr. Trigillio tells the seminarians he teaches: “The life you live as a priest is not your life anymore.” It is a life consecrated through exclusivity (celibacy), obedience to Christ and the Church, and the sacrificial gift of self to God’s people.

Throughout history, every religion that has had an official priesthood, Christian or not, viewed priests as “sacrificers” whose role was to intercede before God on behalf of others. The sacrificial nature of any priest is fundamental to his identity but more so in the Catholic priesthood, where the priest offer the Church’s sacred mysteries.

The priest’s role of celebrating the sacraments is always personal and direct. Catholics cannot receive sacraments via zoom calls or over the telephone because the priest’s ministry is immediate and personal in order for it to be valid. By extension, physical participation in Mass, direct confession of sins, personal reception of sacraments like anointing and confirmation are necessary to avoid the privatization of religion which is so common in Christianity today.

The sacrament of Holy Orders is called a “sacrament in the service of communion” for good reason. The Catholic priest truly keeps the Church focused on Christ and authentic worship, without which the Church would cease to be.

Preserving the Sacred Character of the Catholic Funeral

The Catholic Church changed its position on cremation in the ’80s, but has allowing cremation been for the better? This is one of the numerous questions that Thomas McKenna explores with our panelists Fr. John Trigillio and Karl Keating in this interview about the sacred character of the Catholic funeral. 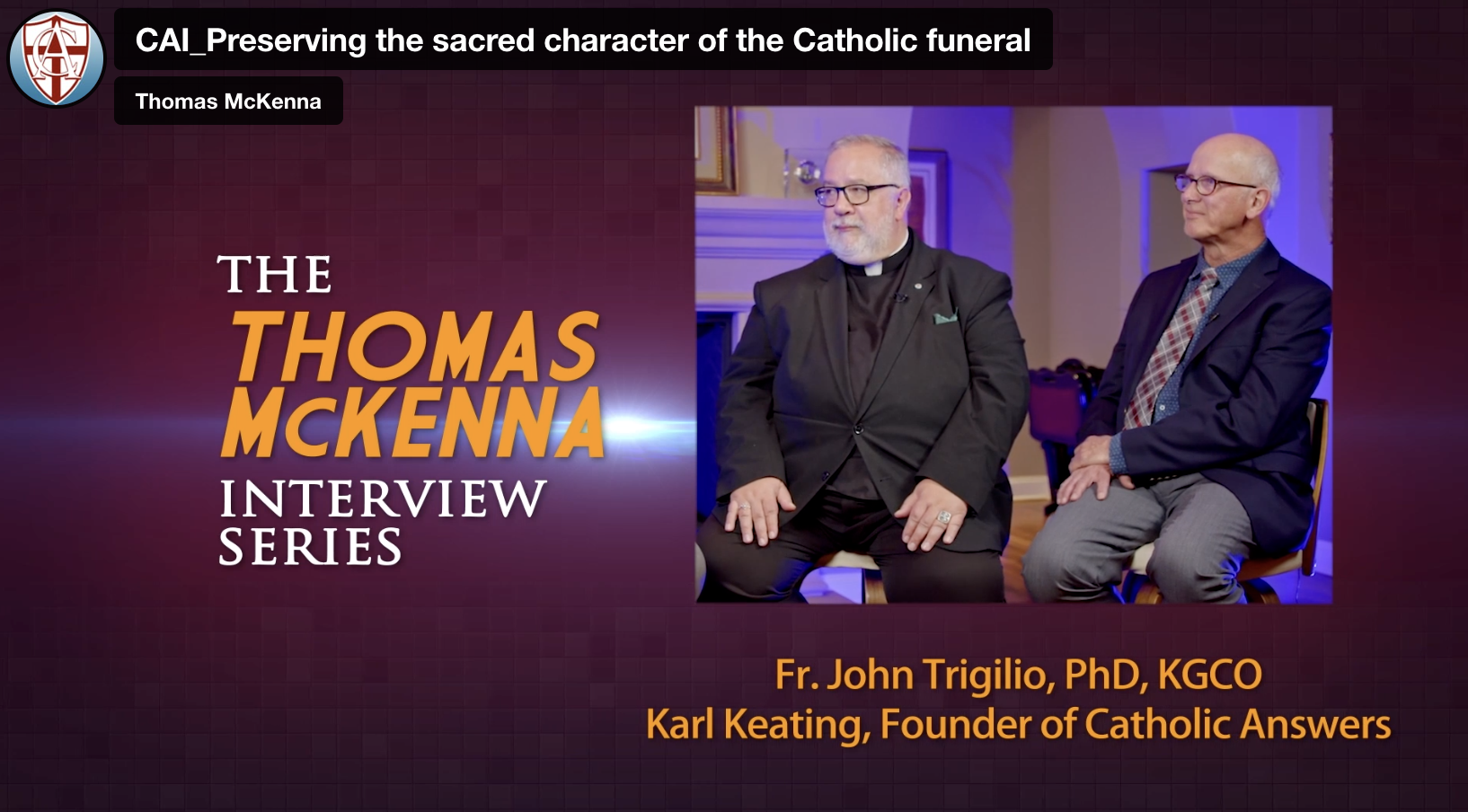 The essence of the Catholic burial rite is our belief in the bodily Resurrection of Christ, which is why Catholics uphold the dignity of the human body, from the moment of conception to natural death – and even beyond. If our bodies are temples of the Holy Spirit, as St. Paul teaches (1 Cor 6:19), then our mortal remains also deserve respect while we await the resurrection of the body.

Modern Catholic funeral practices often lose sight of this because they are influenced by the pagan attitudes of our culture and are easily watered down by many factors:

Often under appreciated is the act of immense charity that takes place at a church funeral where we pray for the repose of the souls of our loved ones. Not only do individual families benefit from having church funerals, but the church community itself performs a corporal and spiritual work of mercy by praying for the dead and offering the consolation of a Catholic funeral.

Make sure you take a few moments to listen to our two panelists as they discuss our great need for the Catholic funeral and the importance of preserving its sacred character.