The Second Vatican Council (1962-1965) was convened in an era of cultural upheaval and challenge. Pope John XXIII inaugurated the Council mindful of the “signs of the times.” 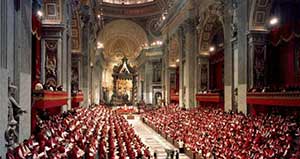 His successor, Pope Paul VI, continued and completed this historic gathering, the purpose of which was to proclaim the Gospel message of Our Lord Jesus Christ, a Word of redemption and truth written on the human heart, in the context of the modern age. Its message was not new. The Council echoed the continuous teaching of the One, Holy, Catholic and Apostolic Church.

In an address to the Curia (December 22, 2005), and later reprised in a talk to clergy, Pope Benedict XVI talked about the “storms” after the Council. He said that the understanding of the Council, correctly to be understood and interpreted as a “continuity” in the Church’s teaching, had frequently been misrepresented by the mass media, which promoted a “hermeneutic of discontinuity and rupture.” He highlighted the differences between the “Council of the Fathers” and the “Council of the Media.” He suggested that the loud persistent voice of the media – a voice of discontinuity and rupture - had prevailed to some extent.

Indeed, this misapplication of the Council documents happened quickly in the Post-Conciliar period. The culture, the media, and in many instances the very children of the Church, including bishops, priests, and religious, used the lure of culture to promote a more convenient and malleable mystery of faith. The Sacred Liturgy was re-shaped in a way that could not be anticipated merely from reading Sacrosanctum Concillium (the Constitution on the Sacred Liturgy).  Advocates for a freedom from authority seemed eager to challenge infallibility and push the limits of dissent. 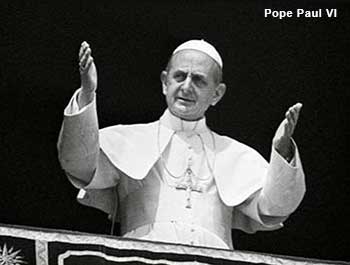 This momentum took shape as the “spirit of the Council.” At one point, Pope Paul VI would acknowledge that, “through some fissure, the smoke of Satan has entered the temple of God” (Homily for Sts. Peter and Paul, June 29, 1972).

In the 1968 promulgation of Pope Paul VI’s encyclical letter “Concerning Human Life,” Humanae Vitae, 50 years ago this year, similar forces of attack were ready to ambush and undermine this teaching which reaffirmed the authentic purpose of the married vocation, and the principles which define the moral integrity of conjugal love. A position paper of those who opposed Humanae Vitae had been leaked. Particularly in the United States, the dissent was rapid and well-organized. Many were emboldened by the post-conciliar excesses and seeming diminution of Church authority – emblematic of the anti-institutional ambiance of the day.

The Pope had taught nothing new. He had given an eloquent witness to the moral law. But now the “Humanae Vitae” of the dissenters, amplified by sympathetic media, disturbed many hearts. The confusion and rift divided Pope, bishops, priests, Religious and laity. Though unchanging in his own faithful convictions, Pope Paul sorrowed grievously over the loss of many priests in those tumultuous years. He would, in his remaining ten years, never write another encyclical.

This brief encyclical (31 numbered paragraphs) asserts the essential purpose of marriage as a design of God: “By means of the reciprocal personal gift of self, proper and exclusive to them, husband and wife tend toward the communion of their beings in view of mutual personal perfection, to collaborate with God in the generation and education of new lives” (HV, no. 8). 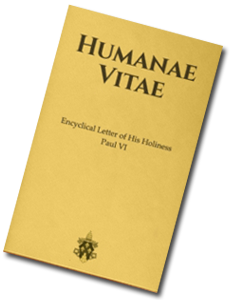 The core of the principles which guide Humanae Vitae is the inseparability of two aspects of marital intimacy: the unity of the spouses and the openness to children. “By safeguarding both these essential aspects, the unitive and the procreative, the conjugal act preserves in its fullness the sense of true mutual love and its ordination towards man’s most high calling to parenthood” (HV, no. 12).

Keeping these two purposes together is what safeguards the true meaning of married love. Artificial contraception, in contrast, willingly introduces a barrier to one of these essential elements: to procreation. It says, “I give myself to you, but not completely.” 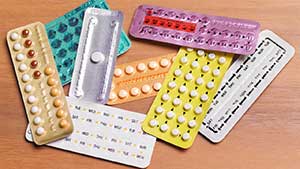 The Pope rightly predicted that the use of the “pill” would lower morality, and make infidelity more frequent. It would lead to the demeaning of women. It would further validate the claims of government to require means to regulate and reduce the number of children.  The world would grow more insensitive to abortion. (cf. HV, nos 17, 14).

In the last sections of Humanae Vitae, the Pope gave pastoral encouragement to all in the Church (bishops and priests, public authorities, scientists and medical personnel, husbands and wives) to live and protect these truths faithfully.

In articles and lectures marking the fiftieth anniversary of Humanae Vitae, some theologians will look for loopholes to living this fidelity to marriage, perhaps based on a subjective definition of conscience, and under the umbrella of “a new paradigm.”

In their commentaries on Humanae Vitae, some media displaying the masthead of “Catholic,” tend to point, not to moral principles, but to the fact that many Catholics (perhaps even a majority) use artificial contraceptives. They seem to suggest that a large number of “good Catholics” who ignore the Church’s teaching is a sign of the “sensus fidei,” a sign of the Holy Spirit at work in the faithful. Perhaps we could ask if, by comparison, the staggering statistics of Catholics who look at pornography indicate that it is therefore morally acceptable to do so – or that it is even inspired by God.

Pope Paul VI was canonized a saint by Pope Francis on Sunday, October 14, 2018. Let us ask his intercession, first for married couples who strive, despite the challenges, to live faithfully according to their vows. May he also intercede for the Church: that we may be preserved in the continuity of the Truth. 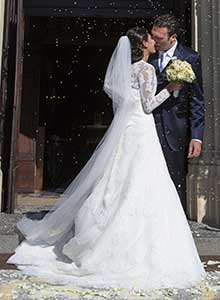 And now we turn in a special way to our own sons and daughters, to those most of all whom God calls to serve Him in the state of marriage. While the Church does indeed hand on to her children the inviolable conditions laid down by God's law, she is also the herald of salvation and through the sacraments she flings wide open the channels of grace through which man is made a new creature responding in charity and true freedom to the design of his Creator and Savior, experiencing too the sweetness of the yoke of Christ. (Mt 11:30)

In humble obedience then to her voice, let Christian husbands and wives be mindful of their vocation to the Christian life, a vocation which, deriving from their Baptism, has been confirmed anew and made more explicit by the Sacrament of Matrimony. For by this sacrament they are strengthened and, one might almost say, consecrated to the faithful fulfillment of their duties. Thus will they realize to the full their calling and bear witness as becomes them, to Christ before the world. For the Lord has entrusted to them the task of making visible to men and women the holiness and joy of the law which united inseparably their love for one another and the cooperation they give to God's love, God who is the Author of human life. (HV, no. 25)