Full of Grace - Catholic Action For Faith and Family

On December 9, 1531, St. Juan Diego was hurrying to celebrate the Feast Day of the Immaculate Conception (then celebrated on December 9), when he was met by the Blessed Mother of God on Tepeyac Hill. 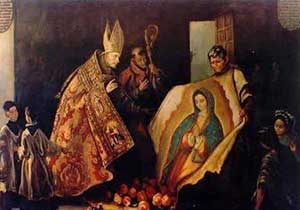 Three more apparitions would lead to the dramatic December 12 revelation of the image of Our Lady of Guadalupe on Juan’s ‘tilma’ or cloak – a convincing sign to the Bishop to build the church requested by Mary.

The Dogma of Mary under her title of the Immaculate Conception would be formally proclaimed nearly 325 years later in 1854, by Blessed Pope Pius IX, in the Apostolic Constitution, Ineffabilis Deus:

“The Most Blessed Virgin Mary was, from the first moment of her conception, by a singular grace and privilege of Almighty God and by virtue of the merits of Jesus Christ, Savior of the human race, preserved immune from all stain of original sin.” (as quoted in Catechism of the Catholic Church, no. 491).

The two great feasts, the Immaculate Conception, December 8, and Our Lady of Guadalupe, December 12, are linked together in the season of Advent. Mary was prepared – full of grace and free from any stain of sin – in the womb of her mother, St. Anne, such that she, Mary, would be a pure and spotless vessel for the Incarnation of Jesus, which we celebrate at Christmas.

Click here to send your rose(s) and intentions to Our Lady of Guadalupe!

Nearly 100 years later, in 1950, Venerable Pope Pius XII would proclaim the Dogma of Mary’s Assumption, body and soul, into heaven. The fact that Mary was without sin – neither Original Sin nor any personal sin – caused the earliest Fathers of the Church to hold that her body would not be subject to the corruption of sin and death. As Pius XII wrote in the Apostolic Constitution, Munificentissimus Deus:

“Finally the Immaculate Virgin, preserved free from all stain of original sin, when the course of her earthly life was finished, was taken up body and soul into heavenly glory, and exalted by the Lord as Queen over all things, so that she might be the more fully conformed to her Son, the Lord of lords and conqueror of sin and death” (as quoted in CCC, no. 966). 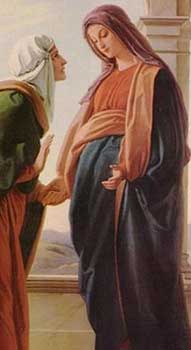 In the Advent days we have a persistent hope in the coming of Jesus: Emmanuel, “God with us.” Mary, as the patient young expectant mother, is a powerful reminder of that joy and hope as she – like other human mothers – anticipates the birth of her child. Mothers might ponder during those nine months the wonderful gift of this new life within them. Mary, we are told elsewhere in the Gospel, contemplated the many mysteries of God in her heart (Lk 2:19).

The Theological Virtue of Hope does not see the precise object which is anticipated, but “trusts in the Christ’s promises, relying not on our own strength, but on the help of the grace of the Holy Spirit” (CCC, no 1817).

Mary is “Spes Nostra,” our hope, not only because she waits with us in the Advent days for the coming of the promised Savior of the world. In addition, Mary is our hope because in the very mystery of her life, in her Immaculate Conception and her Assumption, we see a glimpse of what God’s grace can accomplish, and the plan He has for us to be with Him in the eternal happiness of Heaven.

In these Advent days, we keep our heart focused on the Promises of Christ. We wait, not alone, but with Mary, Full of Grace; with Mary our Mother and Queen. May she keep us always on a safe path to her Son.

“Then she [Madre Pascalina] handed [me] the first of Padre Pio’s [now St Pio of Pietrelcina] letters to her.  … [sent shortly after Pope Pius XII’s death]

On Thursday the Ninth of October, 1958, Padre Pio was saying Mass accompanied by a Franciscan Brother. … Immediately following the Consecration … the quiet Latin came to an abrupt halt. Padre Pio lowered both hands and held fast to the altar. … [His] eyes were closed tightly … and [he] remained like that for several minutes. He then took a very long and deep breath, … and continued with the Holy Sacrifice of the Mass. Once inside the sacristy, the Franciscan Brother asked Padre Pio what had happened.  … ‘Our dear Holy Father has died and is with God.’ 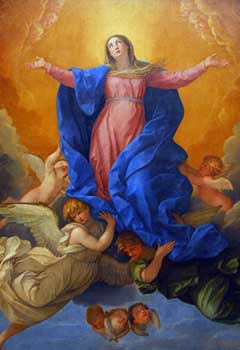 ‘The radiant soul of Eugenio Maria Giuseppe Giovanni Pacelli did not spend a single moment in purgatory, but ascended directly into the heavens. It was not St. Peter who welcomed him, but one of St Peter’s most distinguished and saintly successors: Giovanni Maria Mastai-Ferretti, Pius IX. There, standing face to face and seemingly lost in conversation, stood the two Popes, each of whom had solemnly pronounced the greatest Marian dogmas since the Council of Ephesus [AD 431] declared Mary ‘the Mother of God’: Pius IX, who declared her Immaculately Conceived, and Pius XII, who declared her Assumed, body and soul, into heaven. Then, from a much higher place, a carpet of roses unrolled downward. At the very top of it was the Blessed Mother, Our Lady of the Assumption, dazzling in beauty and light, surrounded by countless choirs of angels. The Blessed Virgin motioned to the worthy Vicars of her Son to step on the rose carpet and ascend to her so she could present them to her Son. The two Popes rose toward the Madonna until they were beyond sight.

‘I saw this,’ declared Padre Pio, ‘as it was happening.’

P.S. – Click here to send your rose(s) and intentions to Our Lady of Guadalupe!