A night of faith and hope for our times. 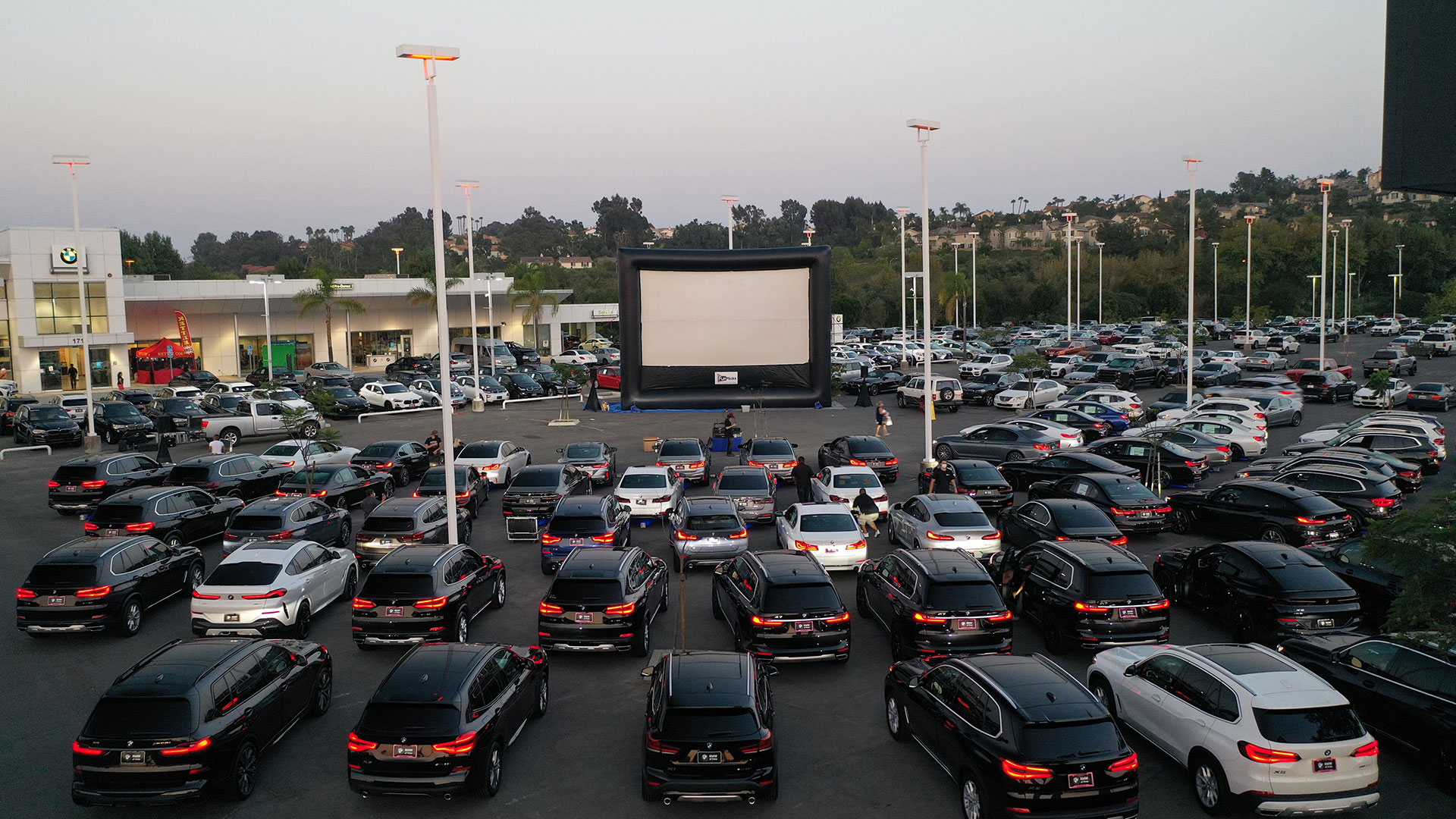 We all know the coronavirus pandemic completely disrupted global travel and it has caused countless live events to be canceled all over the world. For the movie/theatre industry in the U.S. specifically, 41K+ movie screens went dark quarantining moviegoers. To win in uncommon times, we need to live by an uncommon faith, embrace uncommon methods, and use uncommon tools.

In selecting the workable venue to show the film, organizers took a cue from BMW’s popular podcast titled, ‘Changing Lanes’ where they regularly journey into their world of lifestyle, design, exclusive luxury and perhaps most importantly, innovation!

Indeed, innovation and out-of-the-box thinking was needed to make this event happen in a matter of only a few days. The event offered local Catholic lay faithful and clergy a unique opportunity to change lanes from where they might otherwise consume a film and watch Fátima from BMW’s luxurious makeshift drive-in theatre the final day before its official release, Aug. 28.

Many thanks from the event’s organizers went out to General Manager of the dealership, Mr. Darrin Fetterolf for his support and for providing beautiful new automobiles with studio quality sound systems for guests to have an opportunity to sit in to experience the film.  Safety precautions were prioritized throughout the night as CDC guidelines were met and exceeded with advanced sanitation measures as well as social distancing and proper face coverings being required for all in attendance. 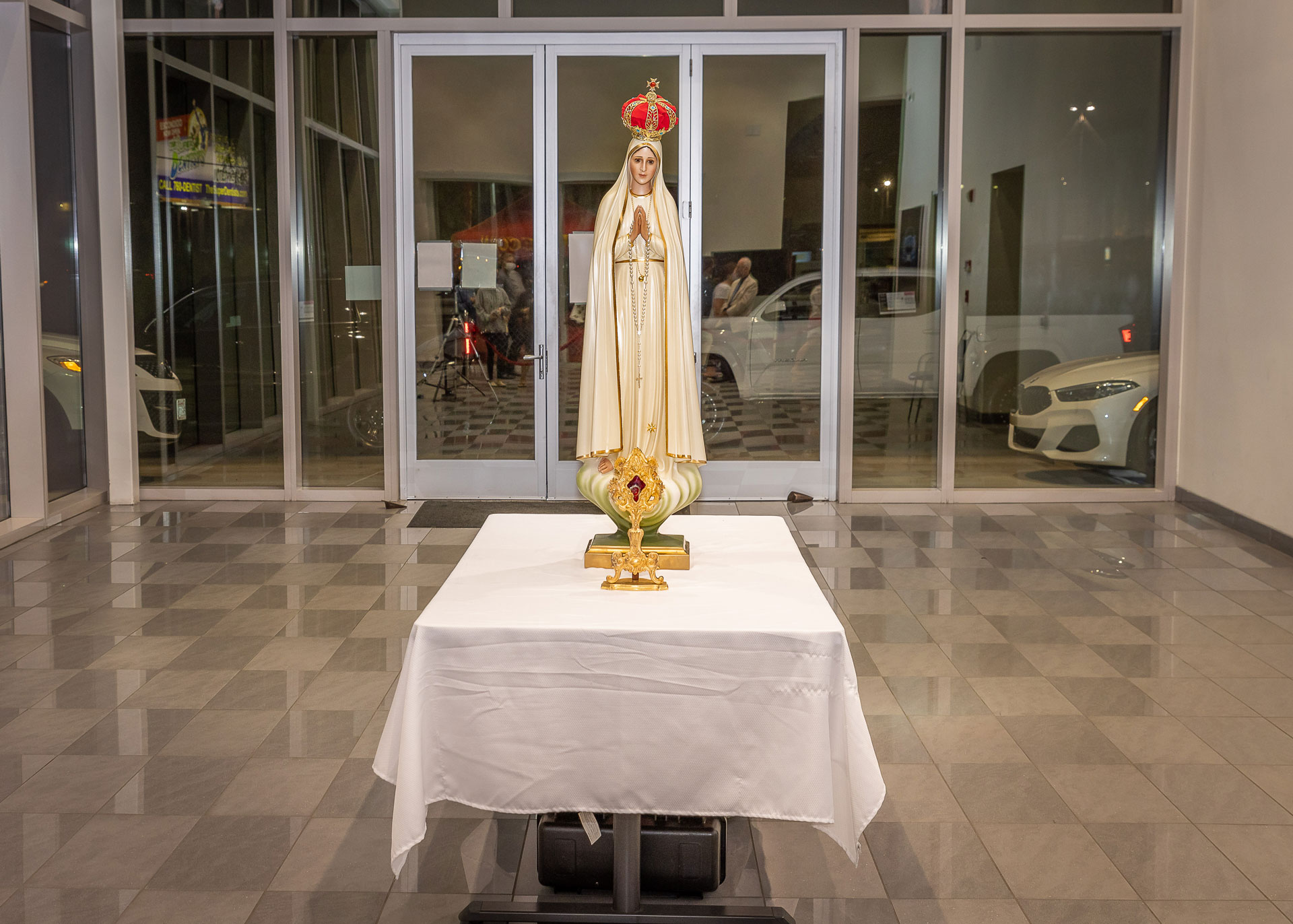 For private screenings during the first few months of 2020, leading up to the originally scheduled release April 24, the film was widely praised for its cinematic depiction of the Marian apparitions reported in Fátima, Portugal, in 1917 and regularly drew standing ovations.

Ensuring the film retained the historical authenticity of the story, the producers set out to breathe new-life into this powerful and uplifting drama of a 10-year-old shepherd and her two younger cousins in Fátima, Portugal who witnessed multiple visitations of the Virgin Mary, inspiring thousands of believers.

This story about the power of faith has fascinated millions for more than a century.

1917 was a tumultuous time marked by military conflict unlike the world had seen before. According to film producer, Rose Ganguzza, “there was huge anti-Catholic sentiment across the Iberian Peninsula. Churches were being closed down in Spain and Portugal and they were hanging priests in effigy.”

A night of hope

Certainly not too far a stretch of the mind to draw parallels with today as our world finds itself mired in confusion and chaos. Rev Ramón Bejarano, honored guest and recently ordained Auxiliary Bishop for the Diocese of San Diego shared his belief pondering, “this film coming to us at a time of a pandemic is not a coincidence.”  The irony was not lost on the guests that Fatima’s shepherd children and siblings, Sts. Jacinta and Francisco, fell victim of the 1918 Spanish flu. 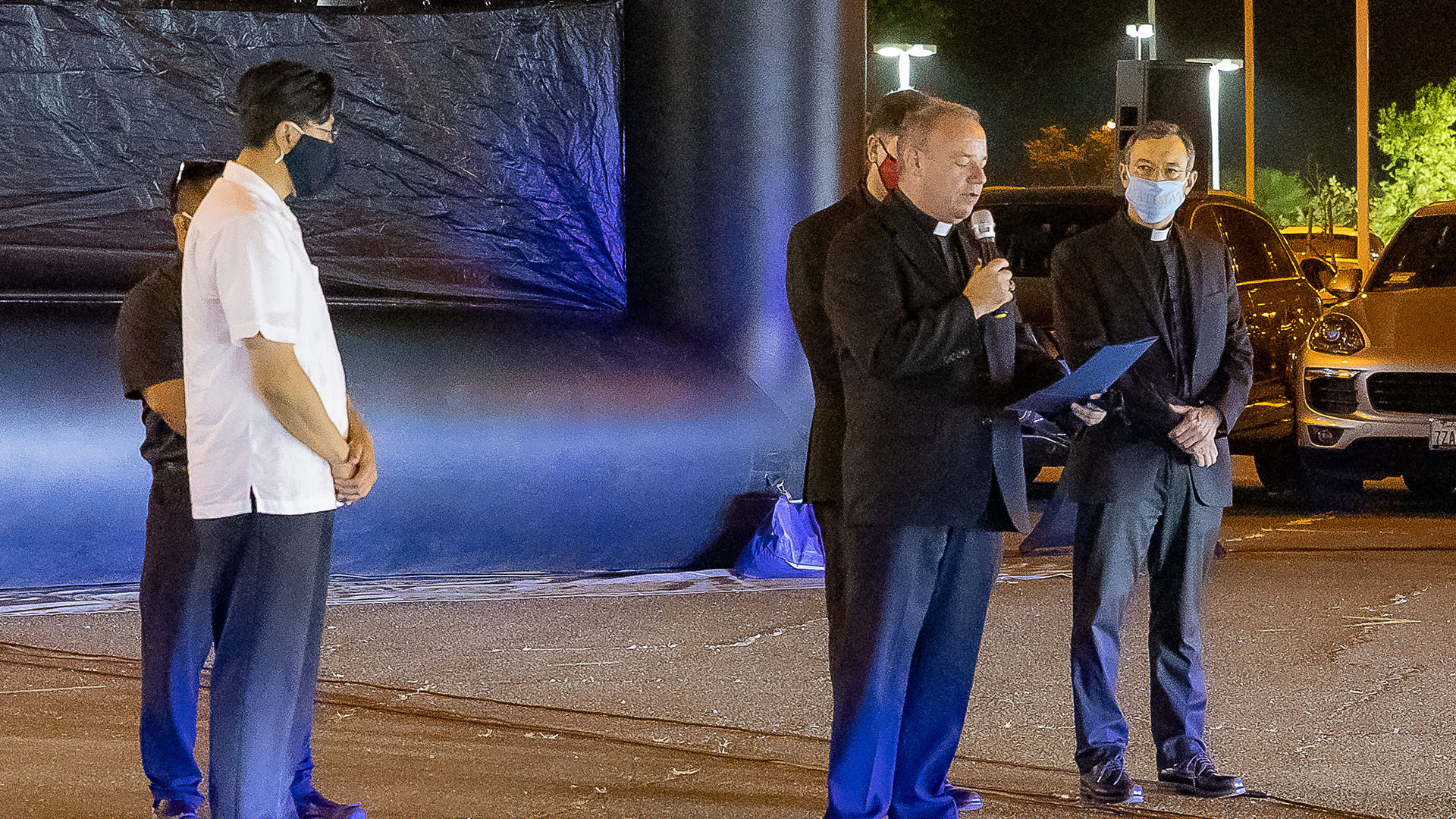 Flanked by four of his brother priests and just prior to giving his blessing for the evening and for the film’s success, Bishop Bejarano echoed “the message of Our Lady is more important and relevant today than 103 years ago.”

“This is a time when secularism is widespread,” His Excellency said, “and…we welcome films with religious, spiritual and moral values.”

Adding beauty and spiritual significance to the occasion was a hand-crafted replica of the world-famous International Pilgrim Virgin Statue of Our Lady of Fatima. Accompanying the statue was a reliquary containing first-class relics of two of the children who saw Our Lady, Jacinta, and Francisco. The statue and the special relics were  provided courtesy of Catholic Action for Faith and Family, an apostolate based in San Diego.

“We normally share these treasures with the faithful as often as we can in churches, cathedrals and amidst other Catholic devotional activities to spread devotion to the Blessed Mother,” said Thomas McKenna, Founder of Catholic Action for Faith and Family and author of the book, The Fatima Century.

One could argue the statue, just as the Lady of the Rosary did those many years ago in a rural village in Portugal, made a lane change to meet the faithful right where they are. According the McKenna, “the message given at Fátima in 1917 is more important for the people living now than for anyone who has lived at any other time, because we are witnessing in our world today the very decadence Our Lady warned us about.”

A night of faith

Without a doubt, the time to release a new film is like no other.  “In the face of such uncertainty and anxiety, we just could not wait any longer to release this film,” said Holly Carney, Executive Producer and Co-Organizer of the premier screening event at Vista BMW.  “The climate in our country needs so much a movie like Fatima with its miraculous message of faith and peace,” she said.

During the making of the film, the film’s director, Marco Pontecorvo expressed hope that just as for those that experienced the Fátima event, “the film will lead us to reflect that 100 years later, the light of God and the Virgin Mary that shined upon Francisco, Jacinta and Lucia still lights the way for those who commit to life of faith in the Gospel.”

In place of a truly in-person standing ovation, the conclusion of the film this summer night was met with a round of applause from honking BMW horns and flashing lights. “Everyone was deeply moved by the film and found it breathtaking in every aspect including the musical score featuring the original song Gratia Plena written and performed by Andrea Bocelli, “said Holly Carney.

For an uplifting story about the Power of Faith, the wait is over. Watch the Movie Preview here.

Officially released August 28, 2020, Fatima is in theatres & on-demand now. Discover where to get tickets or to watch at home at www.fatimathemovie.com 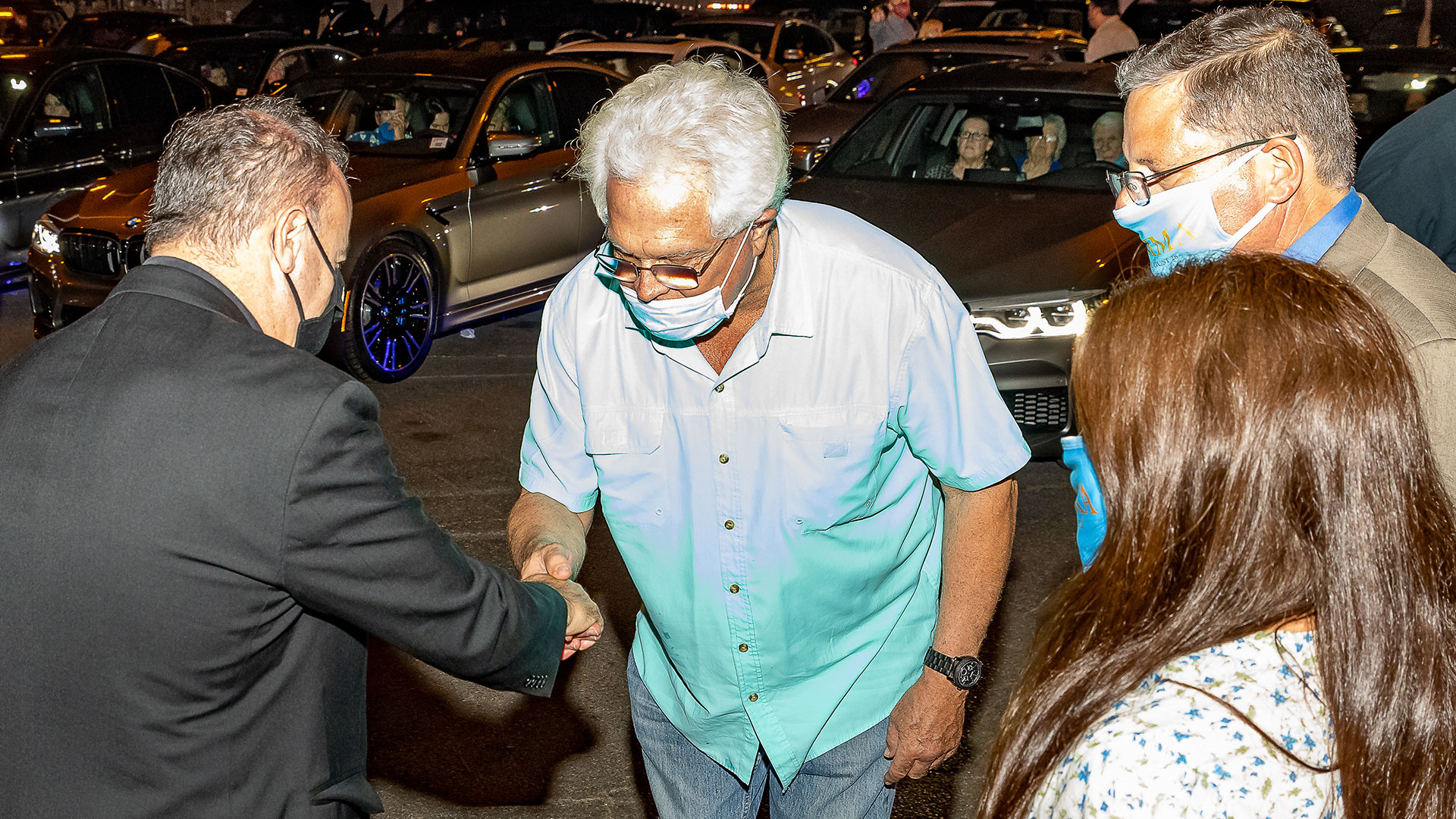 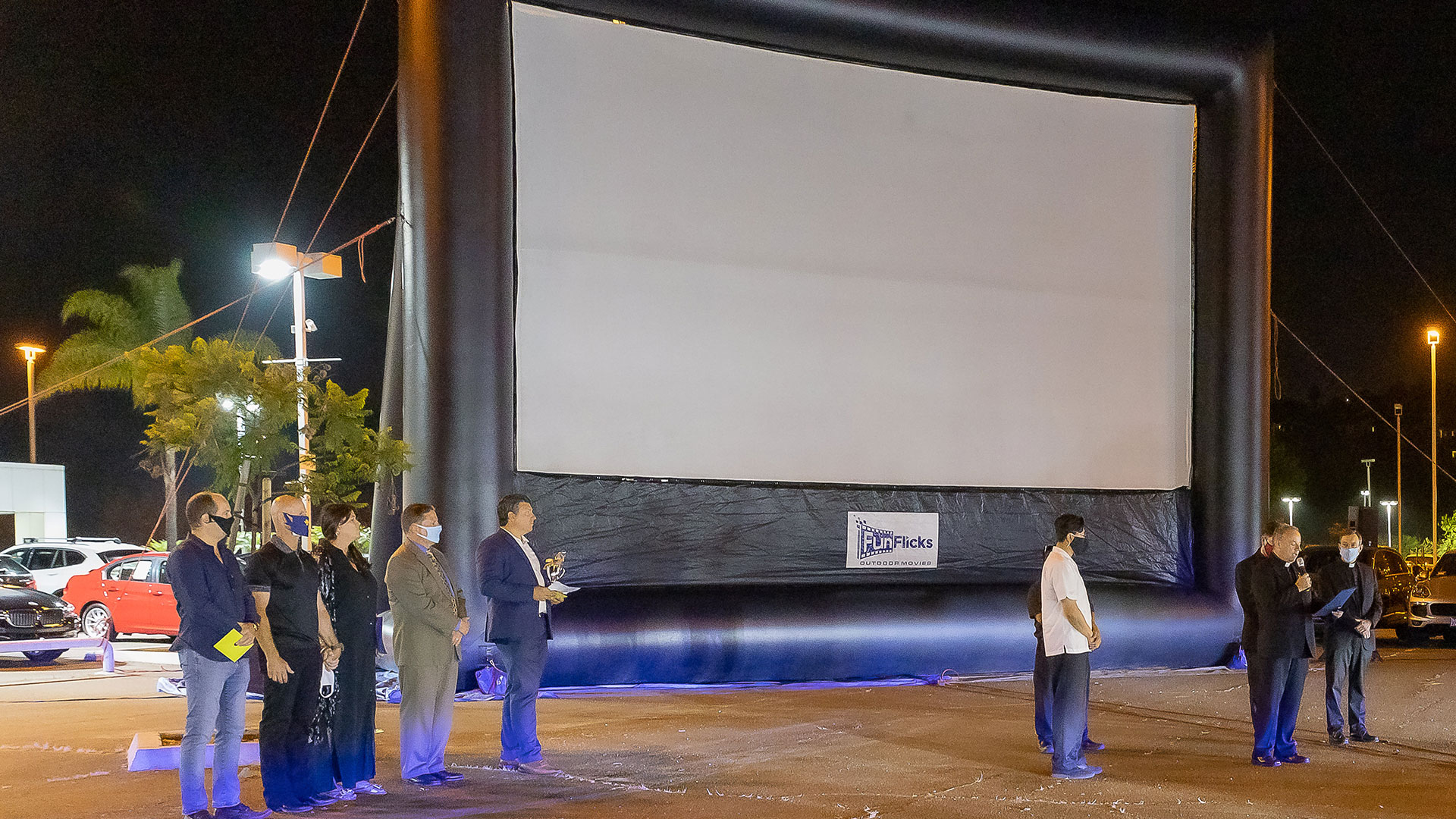 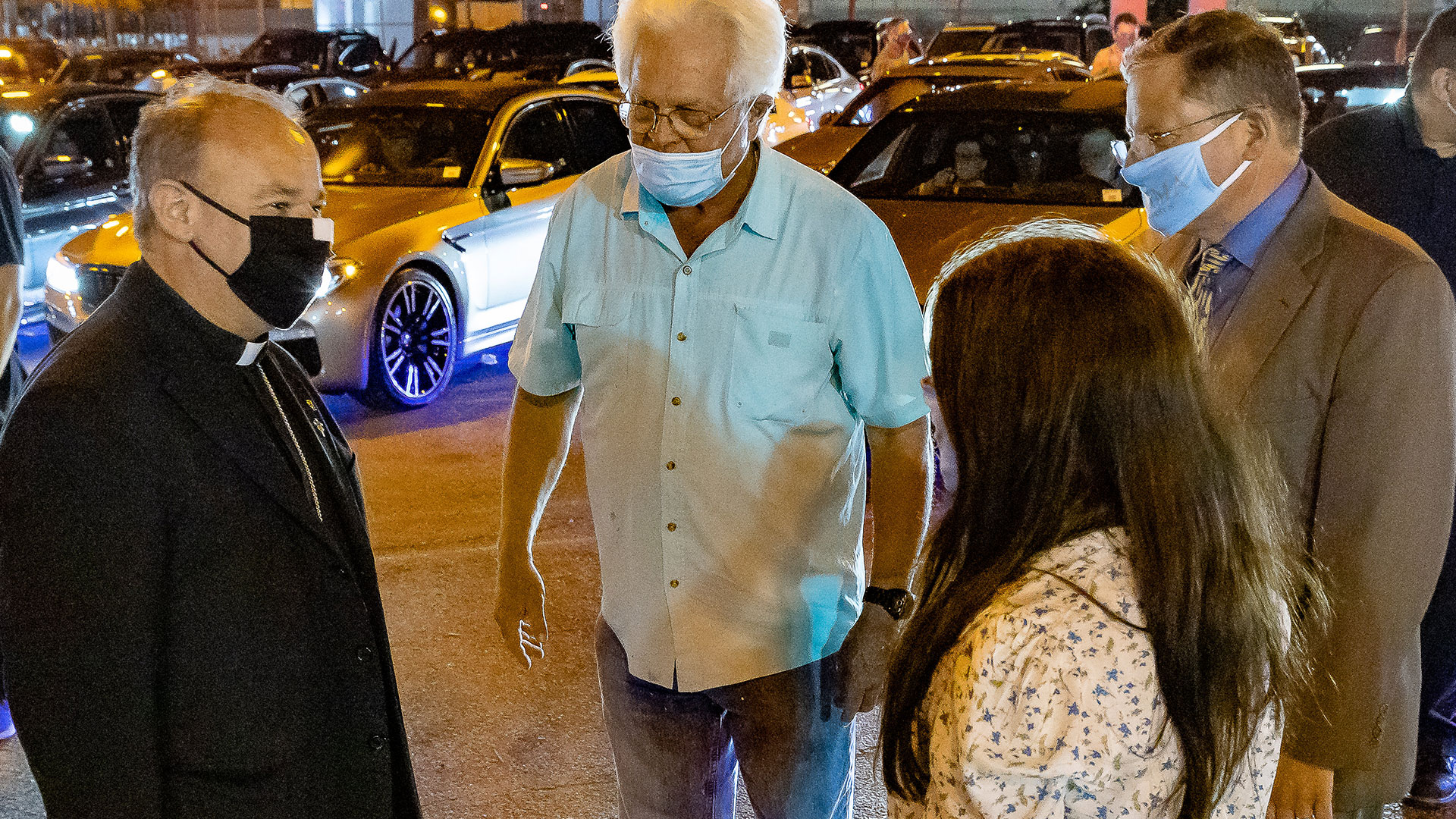 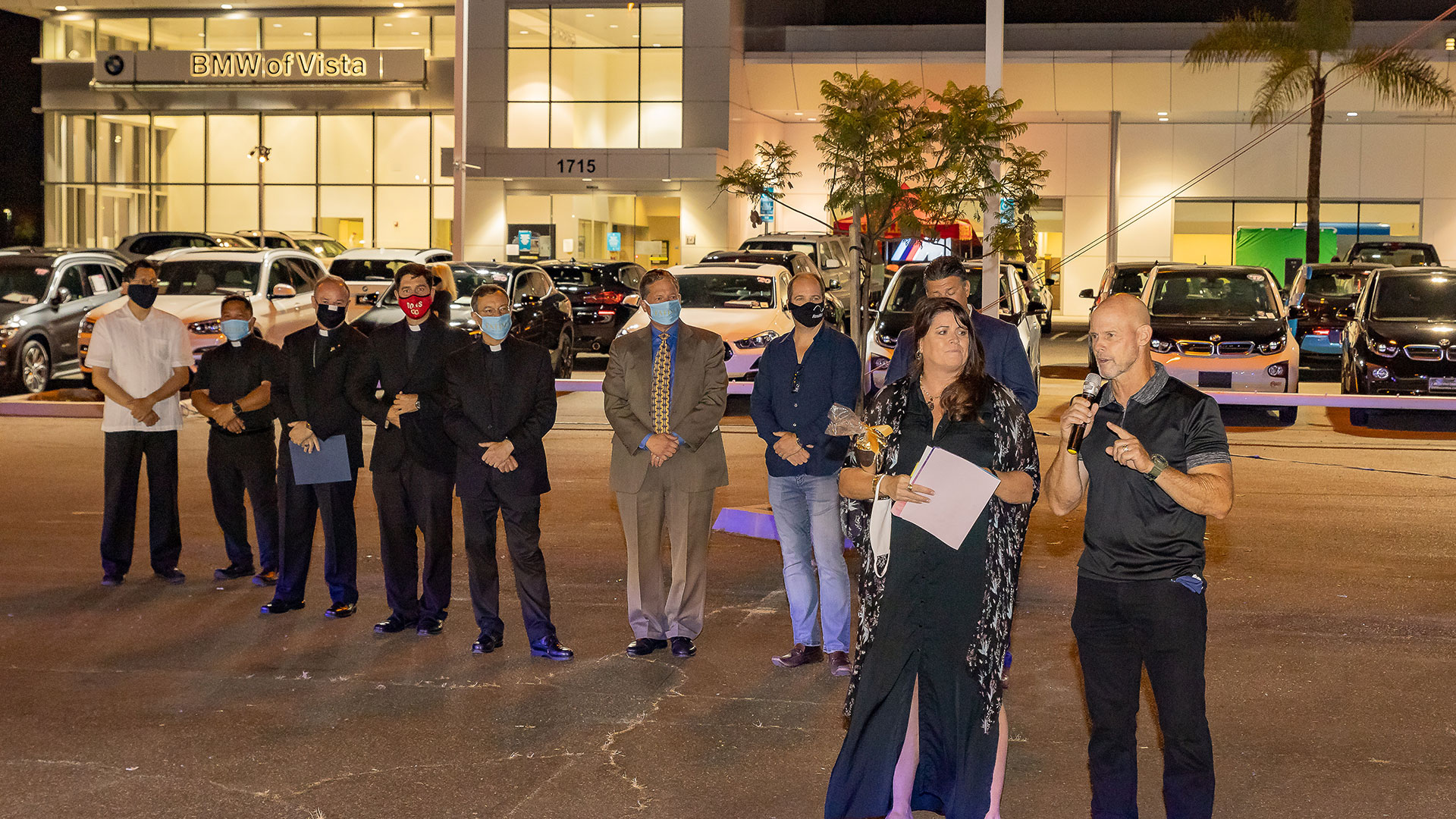 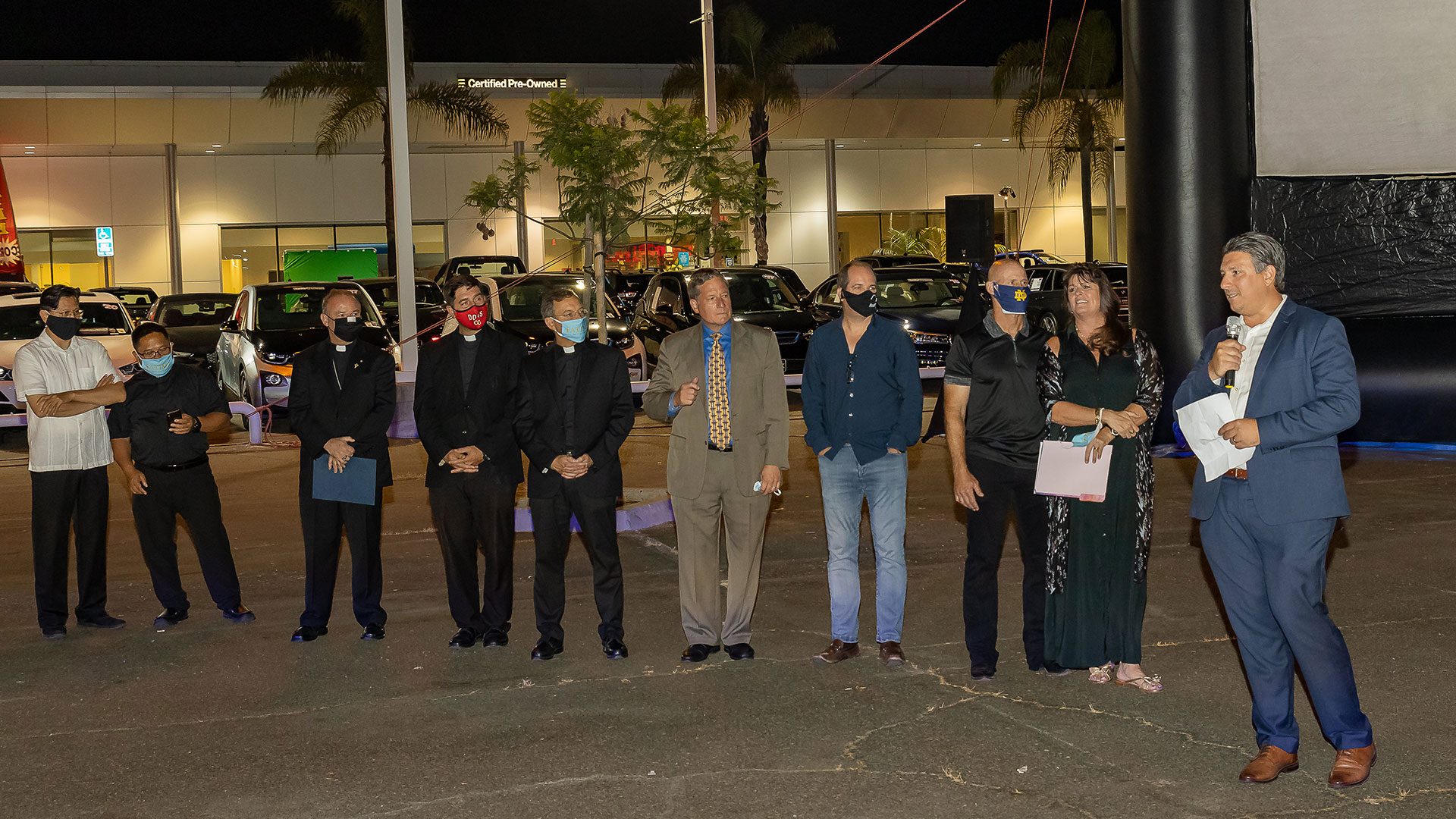 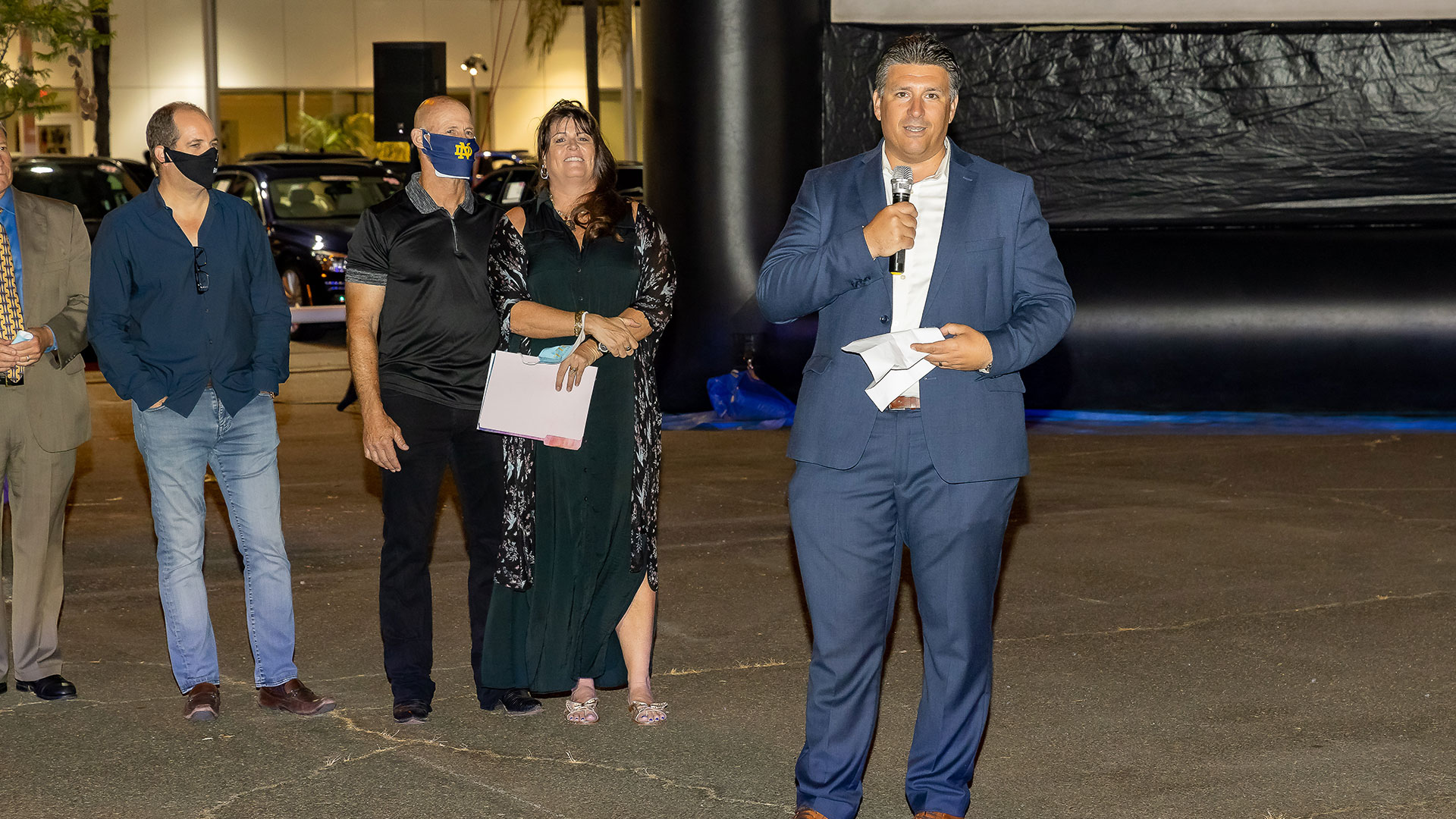 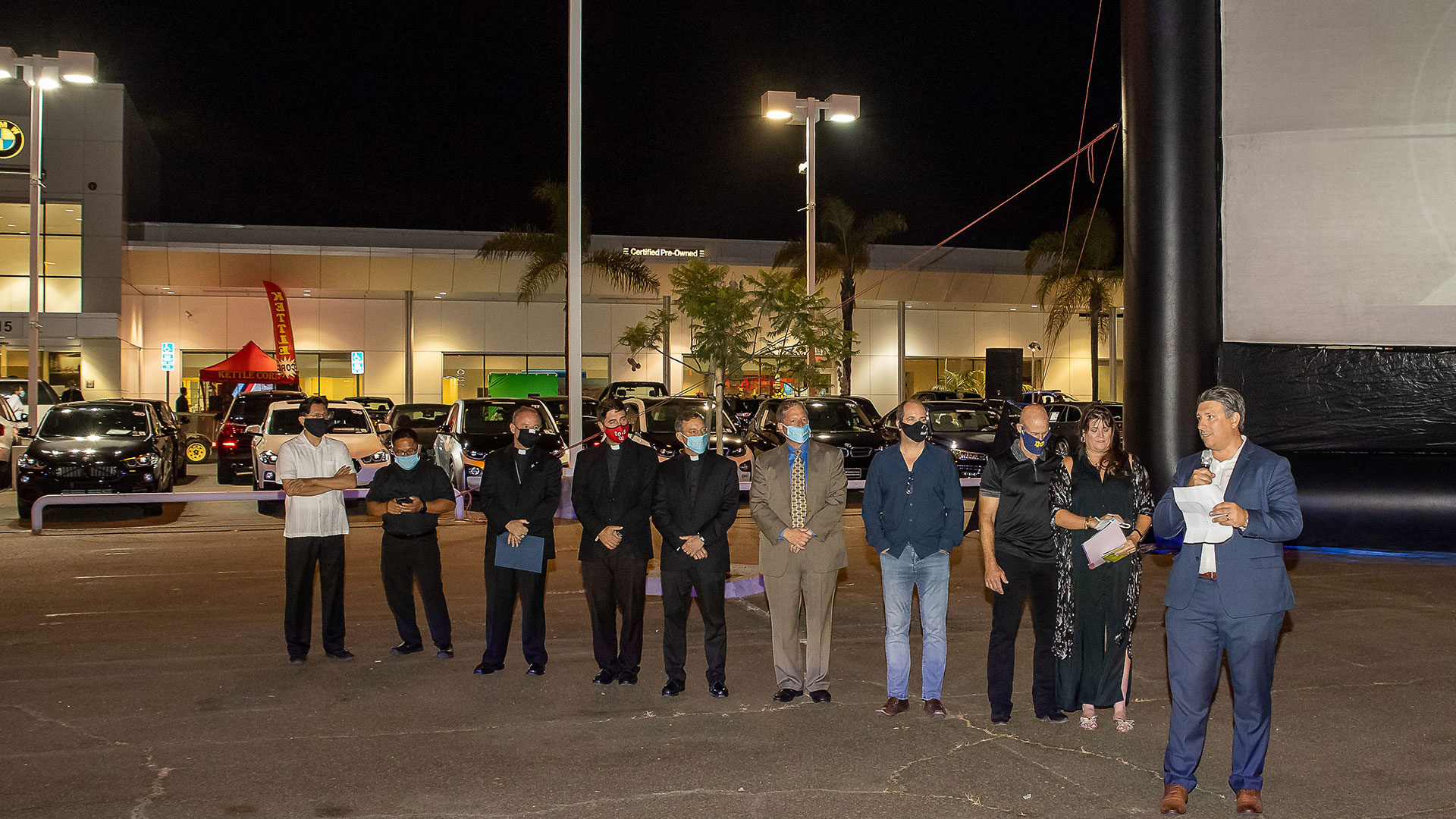 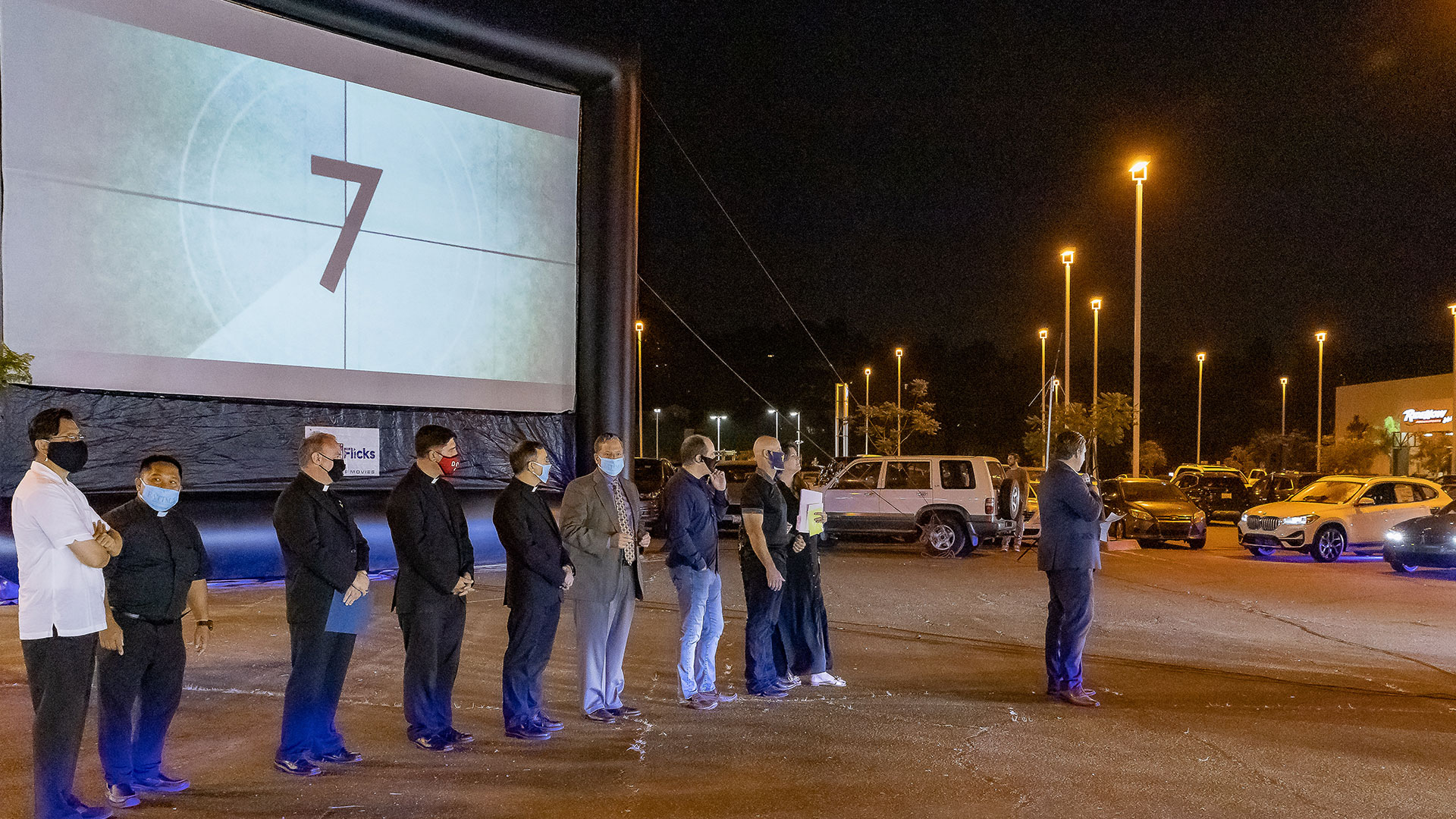 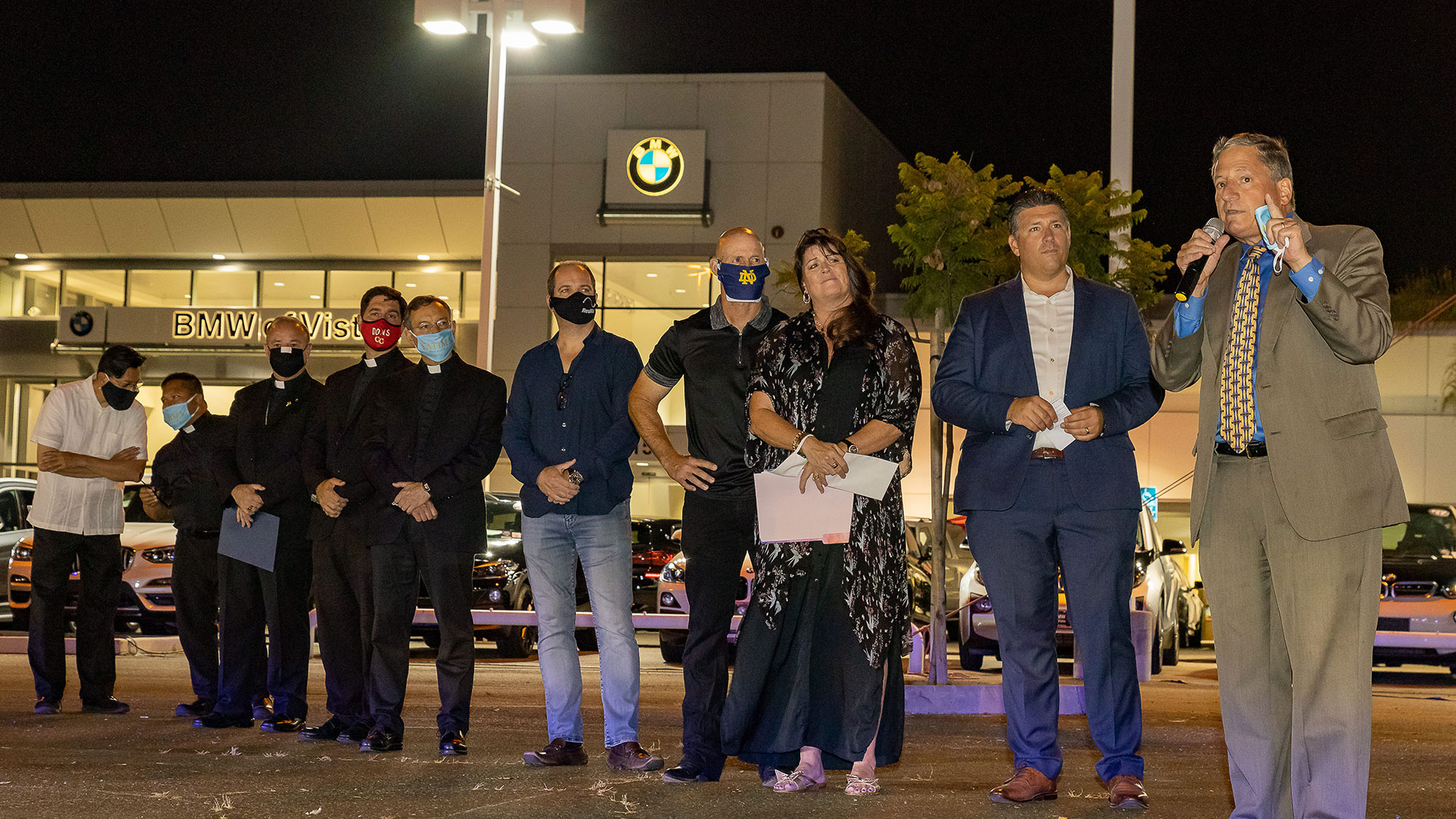 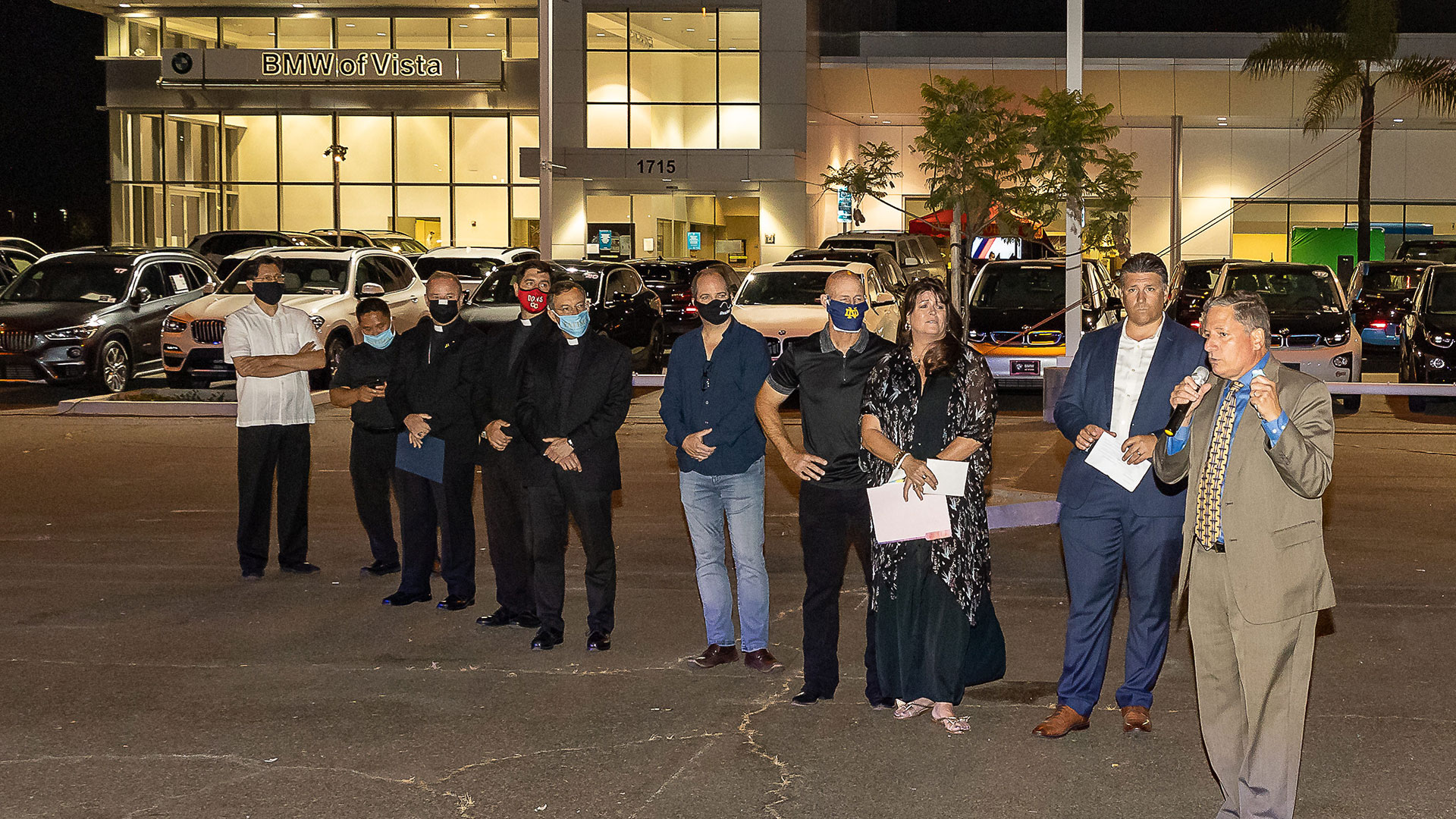 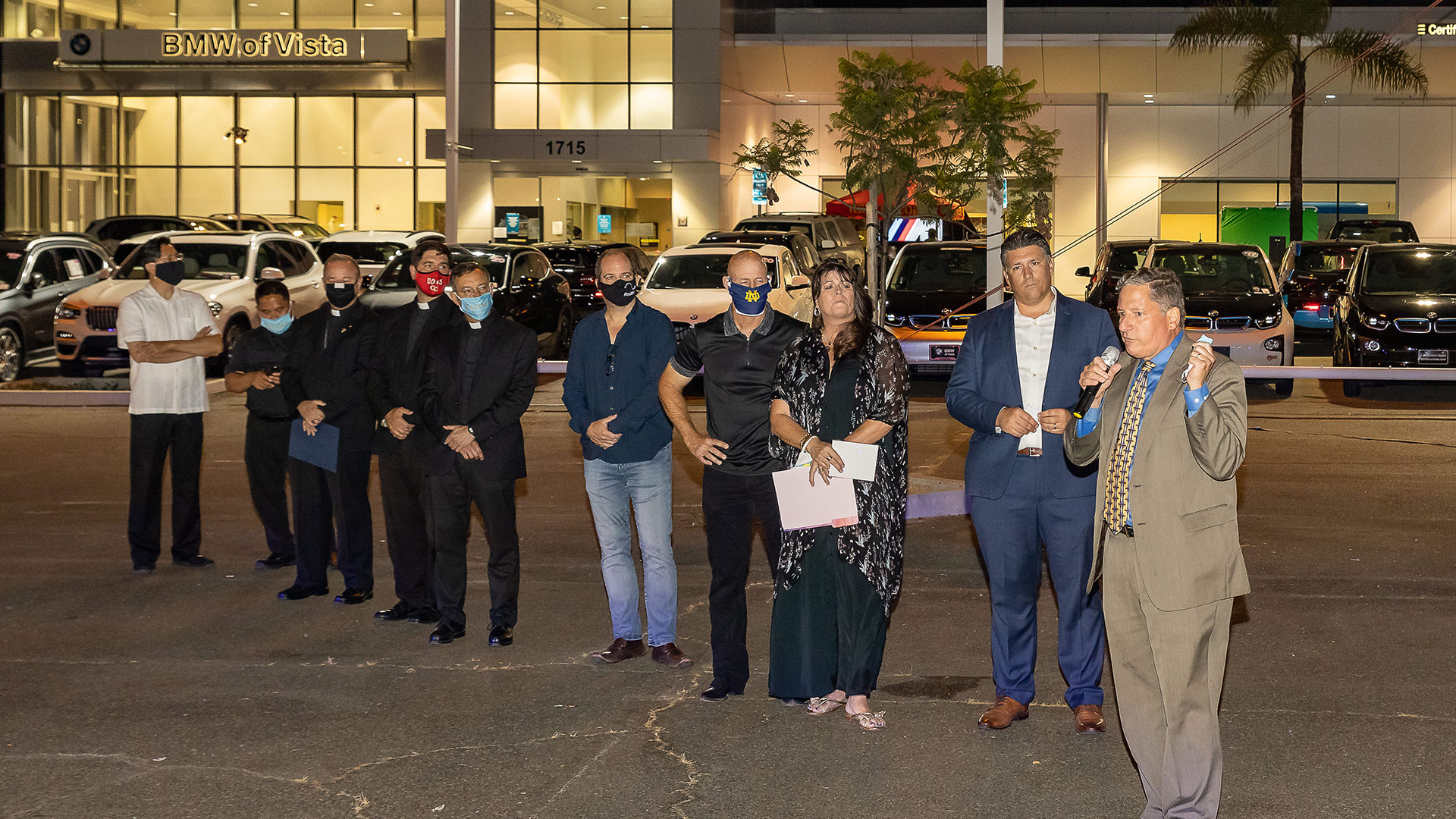