Epiphany is a Feast Day within the Church’s liturgical celebration of Christmas. In the current Western tradition, we associate it with the “Visit of the Magi,” or visitors from the East recounted in Matthew’s Gospel. (Mt 2:1-12). Epiphany is traditionally celebrated the 12th day after Christmas, (Twelfth Night), January 6th. In the Catholic dioceses of the United States this feast has been moved to the Sunday after January 6.

Epiphany takes its name from the Greek epiphania, a manifestation. Jesus, born quietly in Bethlehem’s stable, is revealed, or made manifest, as the Son of God.  In the recognition of Him by the Magi, the Christ, He is revealed to the “nations.” (see, for example, Is 42:6; Is 60: 1-6; and Psalm 72:11)

The Feast Day is associated with three events in the life of Christ when His divinity shines through His humanity: the adoration of the Magi; the baptism of Christ in the Jordan (Mt 3); and the first miracle at the wedding feast of Cana, (Jn 2), The latter two of these were designated as Luminous Mysteries of the Rosary, by Pope St. John Paul II in 2002. In these “Mysteries of Light,” we meditate on the revelation of Jesus as the Divine Son of the Father.

There are many traditions associated with the Epiphany. Here are three that became special to me at some time in my life.

The Blessing of Chalk and Doorways 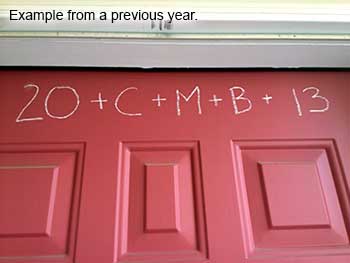 One tradition on Epiphany involves blessing chalk, that, then is used to mark the doorways of our homes with the year (2019) and the initials of the traditional names of the Three Kings:

The chalk is blessed by a priest.

Families can take the blessed chalk home and the “head of the house,” ideally the Dad, marks the frame with the date and initials:

The practice invokes a blessing on those who live in the house, and – in remembrance of the Magi - all visitors to the home.

In the older traditional Latin Missal was a very lengthy prayer for the blessing of holy water on the Eve of Epiphany. The bishop, or with the Bishop’s delegation, a priest, would use the extensive litanies and prayers to set aside this water for use throughout the year. The elements of salt (to be added to the water), and the water itself, were first exorcised. Any taint of the devil was cast from them, and then they were blessed.

The Rite, still used in the Byzantine Catholic Church, was carried out on the night before Epiphany, because of its association with the revelation of Jesus Christ at His baptism in the Jordan River. There the Holy Spirit descended on Him, and the voice of God the Father was heard, “This is my Beloved Son.” (Mt 3: 16-17)

A third Tradition of Epiphany is less liturgical, but I have always found it touching. It is the Italian tradition of the “Befana.” In many parts of Italy, (and some other countries as well) gift-giving takes place on Epiphany, January 6. In Italy it typically includes the figure if an ‘Old Lady,’ named Befana. Her name may be a cognate of the word “epiphania.”

The story goes that, the Magi, following the Star and on their way to find the Christ Child, stayed one night at the home of a hard-working elderly woman, Befana. She took wonderful care of the travelers. Her house was so clean, and she cooked them a marvelous meal. They told her where they were going, to find the Divine Child, to pay Him homage and give Him their gifts. They invited Befana to accompany them to the Christ, but she was busy sweeping the house and carrying out the chores, and explained that she had too many other things to do.

After the Wise Men left, Bafana began to regret her decision. The legend says that she gathered many gifts and she left her house, still with her broom in hand. She would spend all her life searching for this special Child. On Epiphany, Befana gives gifts to children, always hoping that one of the children she sees, and to whom she gives a gift, will be the Christ Child.

Often Befana – an old woman with a broom – is represented as a witch or a comical character. I like to think of her as a good, hard-working woman, who, like us all at times, got too absorbed in her work. She missed her opportunity to follow after the Incarnate Lord, but now serves God in generous charity, by giving what she has to those she encounters, knowing that in so doing, she honors Jesus Christ Himself. 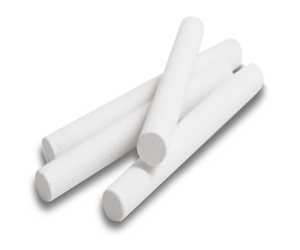 P: Our help is in the name of The Lord.

All: Who made heaven and earth.

P: The Lord be with you.

All: And with your spirit.

P: Bless, + O Lord God, this creature chalk to render it helpful to men. Grant that they who use it in faith and with it inscribe upon the entrance of their homes the names of thy saints, Caspar, Melchior and Balthasar, may through their merits and intercession enjoy health of body and protection of soul. Through Christ our Lord.

All: Amen.  (It is then sprinkled with Holy Water)

The head of the House marks the door frame, usually above the main door;

He may also offer a Prayer:  Bless this house, O Lord, and all who dwell here. May we be blessed with good health, righteousness of heart, humility and obedience to Your commandments. Fill us with the Light of Christ, so that our charity may extend to all who enter here.

If you would like to help defend the Catholic Faith and our Catholic Traditions, please click below and join the Faith Defender Family!