“Ladies and Gentlemen, this is your captain speaking. There has just been an earthquake outside of Mexico City. We have been placed into a holding pattern until the runway is deemed safe and we are given the all-clear to land. So please sit back, relax and….”

And thus began my pilgrimage to visit La Virgen de Guadalupe at the place of her apparitions in Mexico City.

Fortunately, there was no loss of life due to the earthquake and we were able to land on an undamaged runway about an hour after the announcement.

On Saturday morning, I made my way to the Shrine with my driver, Joel. It was interesting and amusing to see the surprise on his face when I asked him to take me to Our Lady of Guadalupe. Maybe he had not been asked by very many gringos to go there. Or maybe my Spanish is not as good as I think and he was perplexed at what I was really asking….. I decided to save that discussion for later.

As any overseas pilgrim or traveler knows, things don’t always go smoothly or according to plan. But, I am so thankful to Our Lady, that after the earthquake, everything else flowed smoothly and it seemed as if Our Lady had sent the angels to lead the way….though there was another earthquake in the middle of the night…but that's a story for another time.

Arriving at the Shrine, I was met by Aracaeli, the lady at the Shrine who made the beautiful bouquets for Our Lady that you see in the pictures illustrating this report. I cannot exaggerate how many times I had to repeat to her over the telephone the number of roses that Catholic Action wanted to present to La Virgen de Guadalupe. She finally accepted the fact that we actually needed 5,972 roses. 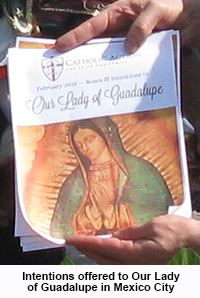 I know exactly how she felt. When my colleague, Thomas, told me that he wanted to give our friends and supporters the opportunity to send roses and their intentions to Our Lady of Guadalupe, and asked me if I would be willing to place them before the miraculous image of Our Lady of Guadalupe, I said yes, of course. I then started to plan how I would deliver the couple of hundred roses and intentions that I expected.

Wow! Was I surprised when the response was enthusiastic and enormous, and resulted in a total of 5,972 roses.

Have you ever tried to order almost 6,000 roses in a variety of colors during the same week as Valentine’s Day?

It is a challenge to say the least. But after many prayers, several phone calls, a few discussions, and a considerable amount of persuasion, the roses were ordered.

When I first ordered the roses, I mentioned to Aracaeli that we could put them in vases or containers as it would be hard to find anything else that would hold so many roses. Her response was classic: “Containers for the Virgin, no way. She deserves the best of the best, so we need to make beautiful arrangements for Her!”

And so 30 wonderful bouquets of roses (200 roses in each) happened. 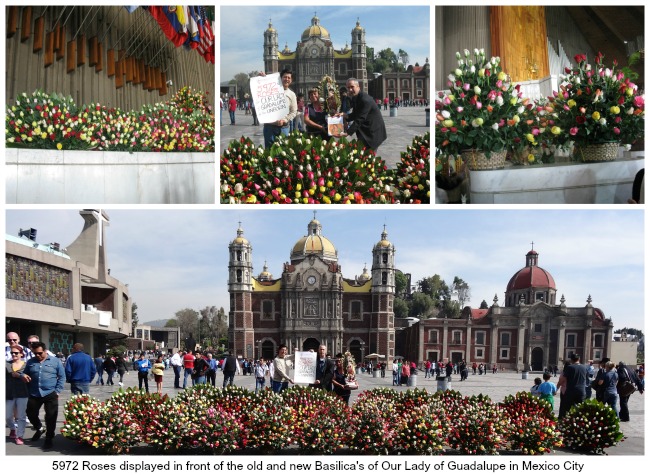 She had also arranged a small team to help transport the arrangements from her little workshop to the nearby Shrine. We were also met by Ricardo, a Rosary Warrior from Operation Storm Heaven, at the Shrine who helped with the roses. Ricardo proved to be a valuable team member and a great help to carry so many flower arrangements to the Shrine.

The head of security, Jose de Guadalupe, allowed us to place the arrangements outside the Shrine for pictures and then to transport them into the Shrine itself and place them before Our Lady!

It was amazing to see how many people stopped to ask about what was happening. They were delighted with the roses being taken to Our Lady on behalf of the Unborn. Both men and women of different ages stated repeatedly: “Please come back again! We need to beseech the Virgin to protect the unborn babies threatened by abortion! Many people also asked if they could have roses to present to La Virgen.

While we were there, the word began to spread and the helpers inside the Basilica cleared the entire area to the left of the main altar and the miraculous image for our roses.

An important historical note is that no flowers are allowed to be placed directly in front of Our Lady of Guadalupe. In 1921, a young man named Luciano Perez Carpio placed a bouquet of flowers concealing a bomb before the miraculous tilma of Our Lady. The subsequent explosion destroyed the marble altar and damaged the large crucifix that you see in the pictures below. Our Lady's image was completely untouched, the glass in front of the image was not even cracked, and no one in the Church was harmed. For this reason, all flowers are placed either to the right or left of Our Lady but no arrangements are allowed to be placed directly in front of Her. 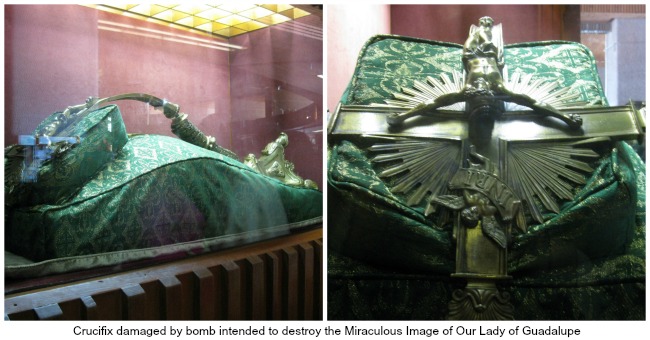 After our 30 rose arrangements were presented to Our Lady along with all the personal intentions that were sent, a Holy Mass was offered specifically for the intentions of each person who sent roses to Our Lady on behalf of the Unborn.

I am very grateful to all of the Catholic Action supporters and Rosary Warriors who sent roses and intentions. I am also so thankful to the volunteers and workers in Mexico who helped make the delivery of roses to Our Lady of Guadalupe a reality.

Our Lady promised protection and aid to all those who come to her. She told St. Juan Diego and all of us not to fear and not to be anxious! In her own words:

Am I not here, I, who am your mother? Are you not under my shadow and my protection? Are you not in the hollow of my mantle, the crossing of my arms? Am I not the source of all your joy?...Let nothing worry you or disturb you!

It is with the certainty of Her maternal protection that we continue to beseech Her to protect the Unborn from the horrific and diabolical threat of abortion, which is truly the human sacrifice perpetrated by our secular world.

If you would like to join me again next year and offer your roses to Our Lady of Guadalupe on behalf of the unborn, along with your personal intentions, please click the image below.