On October 14, while the Synod Fathers were gathered from around the world in Rome discussing issues related to the family, the Italian version of the book written by Cardinal Burke on the Holy Eucharist was launched in the Eternal City. Divine Love Made Flesh: The Holy Eucharist as the Sacrament of Charity was presented in a public venue held at the Pontifical Lateran University. The keynote speaker highlighting the importance of this book was His Eminence Robert Cardinal Sarah, Prefect of the Congregation for Divine Worship and the Discipline of the Sacraments.

The program was held in the Pius XI hall and was well attended by members of the hierarchy, priests, religious and many other dignitaries from prominent organizations and institutions, many notably from the Sovereign Military of Malta for which Cardinal Burke serves as the Cardinal Patron of the order.

The moderator was the well-known Italian journalist Matteo Matzuzzi from the daily newspaper Il Foglio. He first introduced Thomas McKenna, President of Catholic Action for Faith and Family who published the English edition and coordinates its international publications. Mr. McKenna explained that he has known Cardinal Burke for more than twenty years and felt blessed to have had the support, collaboration and inspiring example of His Eminence throughout the years. He stated “it was through this personal collaboration and friendship that I came to appreciate and understand the profound spiritual life and deep love of Holy Mother Church that Cardinal Burke possesses.”

He commented that some say that Cardinal Burke is not reasonable and pastoral when he suggests that public figures who openly defy Church teachings should be denied reception of Holy Communion. He stated for that reason he thought it would be good for people to know what he knew, “that is, that Cardinal Burke is so profoundly concerned about reverence and respect for the Most Holy Eucharist because of his profound love and devotion to It.” Mr. McKenna announced that a Polish edition of the book will be published before the end of the year and that negotiations to publish it are in progress in Portugal, Brazil, France, Germany and Croatia in the near future. 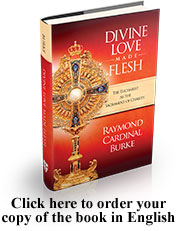 The keynote address was given by Cardinal Sarah who began by saying that because of the Synod which he was participating in, “these days have been obviously quite full of work, but because of the importance of the topic, I wanted to participate in the launching of this book that I consider a distinctive and true jewel, especially because of the many ideas it gives for our participation in the Holy Sacrifice of the Altar in a more conscious, active and fruitful way.”

He went on to explain that if the Mass lost its special flavor, it would become a mere habitual act for the individual, making trivial the greatest gifts offered by it. He said he could give several examples but wanted to site one. He said he was struck when recently attending the World Meeting on the Family in Philadelphia. He said that during the Holy Mass with the Holy Father he witnessed several priests, who during the procession to receive Holy Communion, were happy to take pictures or “selfies.”

He continued, “it seems clear that the beautiful face of Christ was replaced by the images of a ‘smartphone,’ with the significant loss of valuable opportunities of the foretaste of the heavenly banquet, and the profound lack of understanding of being in front of the majesty of God and entering into intimacy with a great mystery which inspires awe, fear and devotion.”

“True beauty is what will save the world and in no other field is it as clear as in the liturgical field. For my part, particularly in the role of Prefect of the Congregation for Divine Worship and the Discipline of the Sacraments, I sincerely thank, with fraternal affection, Cardinal Burke for this most beautiful contribution regarding the most important and delicate discussions of our days. I wish you all a fruitful reading of this precious book offered to the Church and which has placed the Eucharist as the source and summit of the Christian life.”

Following Cardinal Sarah, Cardinal Burke gave the final discourse thanking all who made the publication of the book possible in Italy and especially thanking Cardinal Sarah for attending and giving the keynote address. He expressed his gratitude to the publishing house Cantagalli for publishing the beautiful Italian version and organizing the launching.

Cardinal Burke noted that his intimacy with the Holy Eucharist began when he was an altar boy and could assist the priest at the altar. From the age of ten he said he observed close up the rich beauty of the Holy Order of the Mass and especially the irreplaceable service of the priest in offering the sacrifice of the Mass, a grace that he has continued to be grateful for throughout his life.

As Bishop of La Crosse and later Archbishop of Saint Louis, he explained how he found a guide and an extraordinary aid in the teaching on the Sacred Liturgy through the works of Pope John Paul II and Pope Benedict XVI as he wanted to illustrate to the faithful in his pastoral care. He expounded how he did this through the diocesan newspaper where he commented on the Encyclicals Letter Ecclesia de Eucharistia and the Post-Synodal Exhortation Sacramentum Caritatis.

He concluded by saying: “I conclude this reflection with the hope that what I have written, inspired by the organic continuity of the Sacred Liturgy through the centuries, will help the reader to appreciate the goodness, truth and beauty of the Sacred Liturgy as the action of Christ in glory among us where we find the meeting of heaven and earth. I hope that reading the book will, in some way, help the reader learn more about our Eucharistic Lord and to love Him more and more ardently. That the humble adoration of the Eucharistic Mystery, the Mystery of Faith, inspire us and strengthen us to a Eucharistic life, a life of pure love and caring for our neighbor, especially the most needy neighbor. May the Blessed Virgin Mary, Woman of the Eucharist, lead us to her Son in the Holy Sacrifice of the Mass, so, in His Real Presence in the Blessed Sacrament, through the divine motherhood of the Virgin Mary, we can always follow his mother's maternal advice: 'Do whatever my Son tells you'." 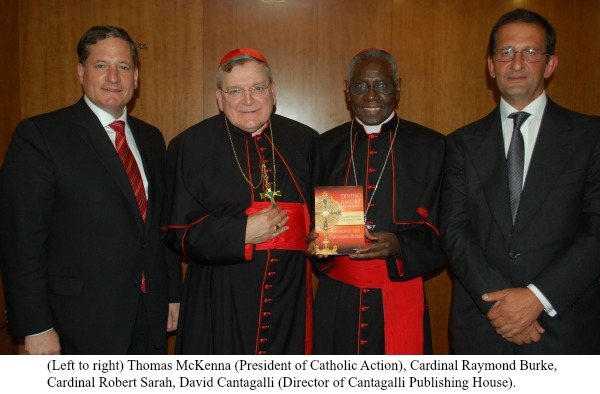