Book Launch in Brazil - Catholic Action For Faith and Family

Cardinal Burke launches book
on the Holy Eucharist in Brazil

Raymond Cardinal Burke’s book on the Holy Eucharist entitled Divine Love Made Flesh: The Holy Eucharist as the Sacrament of Charity, is now in Portuguese, and Brazilian Catholics love it. Previously published and launched in English, Italian, Polish, French, and Croatian, the book is a testimony to Cardinal Burke’s devotion to Christ, present through the holy liturgy of the Catholic Church. The book’s Portuguese-edition publisher, Ecclesia, invited Cardinal Burke to visit Brazil in order to launch his book, a trip that spanned ten days in the largest Catholic country in the world. All of the venues of four major cities were sold out.

The Cardinal’s journey began in the city of Belem, the “gateway to the Amazon.” There, in Brazil’s hot and humid north, the Cardinal was greeted by the local bishop, Dom Alberto Taveira, and devout priests and laity. Cardinal Burke spent time praying at Belem’s cathedral, and the shrine of Cirio de Nazareth, the site of the world’s largest annual Marian procession. That evening the first book launch took place, with speeches by Cardinal Burke, Thomas McKenna, founder of Catholic Action for Faith and Family who coordinated the tour and book publishing, and professor Joao Carlos Pereira, a member of the Parenese Academy of Letres. The event was attended by an overwhelming number of young people who made up most of the audience. People traveled more than twenty four hours to attend. Following the program people lined up, some waiting almost two hours with book in hand to get an autograph, greet the Cardinal, receive his blessing—and, of course, snap a photo with him.

The next day, on the feast of Corpus Christi, a municipal band joyfully welcomed Cardinal Burke to a seventeenth-century church dedicated to Our Lady of the Holy Rosary. Hundreds of worshippers, almost entirely young people, filled the church to standing-room only as they participated in the Cardinal’s pontifical high Mass in the Extraordinary Form. Afterwards, Cardinal Burke led the Eucharistic procession, following the Church’s tradition of bringing Our Lord into the streets on this great feast day. He carried the monstrance aloft, protected by a richly-decorated canopy, as throngs of laypeople followed and heartily sang hymns. That evening, the Cardinal attended the inauguration and blessed the offices of the newly formed Avila Cultural Institute dedicated to studying the works of St. Thomas Aquinas and other classic Catholic authors. In all, Cardinal Burke’s time in Belem was a fitting and symbolic beginning to his Brazilian outreach.

Upon arriving at the airport of Brasilia, the nation’s capital, the Cardinal was greeted by Archbishop Fernando Guimarães, the bishop in charge of Brazil’s military ordinariate. In the evening, a book launching was held in a sold out auditorium packed with more than 400 people most of whom were under the age of 35, including many priests and religious.

The next day, Cardinal Burke celebrated a pontifical high Mass with members of the Institut du Bon Pasteur at their new and classically-designed Capela Nossa Senhora das Dores (Chapel of Our Lady of Sorrows) in Brasilia with a standing room only congregation in attendance. The choir sang Gregorian chant along with works of Palestrina, Victoria, and Gabrieli. That afternoon, Cardinal Burke dined with Cardinal Sérgio da Rocha of Brasilia, as well as other bishops from the region.

On June 17, Cardinal Burke traveled to Rio de Janeiro, where he celebrated Mass in the Extraordinary Form in the beautiful Baroque church of Our Lady of Carmel, the former cathedral which was the parish of the Imperial family during the time of the monarchy. Again there was standing room only as over 500 people assisted the Mass.

That evening it was again a packed crowd of book launching attendees who greeted the Cardinal with sustained applause and manifested great enthusiasm for him and the other speakers. The cardinal of Rio was not able to attend but sent his secretary to represent the diocese and welcome Cardinal Burke. A palpable joy and excitement filled the room as the Cardinal spoke. As with the other cities, young people lined up for hours to meet Cardinal Burke, have him sign their book, and take their photo with him.

From Rio de Janeiro His Eminence visited the National Shrine of Our Lady of Aparecida, the principle patroness of Brazil. The shrine is the fourth most visited shrine in the world. There he was received by Archbishop Orlando Brandes and the rector of the shrine. Following lunch with them and other clergy Cardinal Burke was given a tour of the shrine which he concluded by celebrating Mass on the altar consecrated by St. John Paul II when he visited in 1980. The altar is directly behind the miraculous image of Our Lady. 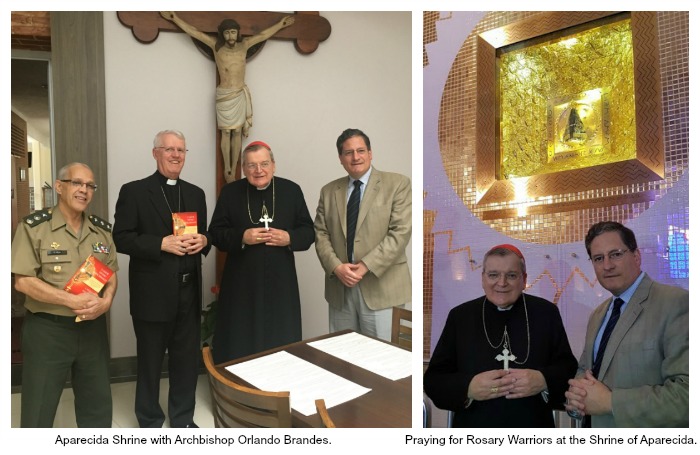 The last city His Eminence visited was Sao Paulo, the largest city of Brazil with over twelve million inhabitants. Aside from meetings with various organizations and apostolates, Cardinal Burke celebrated Mass in the Basilica of Our Lady of Mount Carmel arranged for the occasion by Cardinal Odilio Sherer, Archbishop of Sao Paulo. That evening a crowd enthusiastically greeted him with lengthy ovations.

Of the almost 500 people attending more than 70 priests, seminarians and religious occupied front rows reserved for them. Among other illustrious guests in attendance was Prince Bertrand of Orléans-Braganza, Prince Imperial of Brazil and heir to the throne who stepped up enthusiastically to have his book autographed. 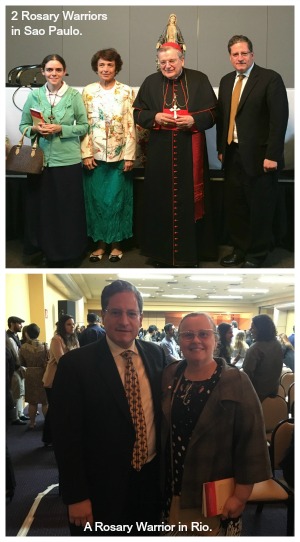 It was inspiring that in each of the cities where the book was launched, Rosary Warriors, members of Operation Storm Heaven, the Rosary campaign led by Cardinal Burke, came forward to introduce themselves to Cardinal Burke and Mr. McKenna and tell them how pleased they were to participate.

As Cardinal Burke boarded the plane to return to Rome the organizers and faithful who accompanied him to the airport expressed their profound gratitude to Cardinal Burke for having made the apostolic trip to Brazil to spread devotion to the Holy Eucharist through his inspiring book Divine Love Made Flesh.

Click here to order your very own copy of Divine Love Made Flesh: The Holy Eucharist as the Sacrament of Charity in English