Assumed into Heaven - Catholic Action For Faith and Family

Because Mary never sinned, and because she was preserved from the first moment of her conception from the sin of Adam and Eve (in the Immaculate Conception), it is fitting that Mary would not have experienced death. St Alphonsus Ligouri says that, because death is the “punishment for sin,” it would seem that Mary was thus exempt from dying. “But,” he writes, “God was pleased that Mary should in all things resemble Jesus; and as the Son died, it was becoming that the Mother should also die.” (Glories of Mary, Discourse VII). However, the sinless Virgin Mary was preserved from the decay of death. She was taken into heaven in the Mystery of the Assumption.

In 1950, Venerable Pope Pius XII, solemnly and infallibly defined the Dogma of the Assumption, the truth of which had been held consistently as the common faith of the Church since the early centuries. He proclaimed, that, “The Immaculate Virgin, preserved free from all stain of Original Sin, when the course of her earthly life was finished, was taken up body and soul into heavenly glory, and exalted by the Lord as Queen over all things…” (Munificentissimus Deus, Pius XII)

Mary’s Assumption is celebrated as a Solemn Feast Day and a Holy Day of Obligation each year on August 15. It is followed – on the octave, August 22 – by the commemoration of the Coronation or Queenship of Mary. The radiant queen, and daughter of the heavenly Father, (Ps 45:10, 14-16), who has been carried to heaven and reunited with the Risen Jesus, is crowned Queen of heaven and earth. 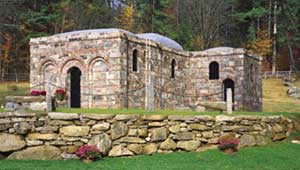 One tradition of the Church, suggests that Mary’s death took place in Ephesus, modern day Turkey. Blessed Anne Catherine Emmerich, a German mystic (1774-1824) related her visions about the life of Mary, which included her death and her Assumption into heaven. St. John, apostle, evangelist, and “beloved disciple,” had been entrusted by Jesus with the care of Mary, at the foot of the Cross; “… and from that hour the disciple took her into his home.” (Jn 19: 26-27). Certainly John lived at or near Ephesus, and was later exiled off its coast to Patmos. The strong tradition associating Mary with Ephesus explains, perhaps, why the Church gathered there for the Council of Ephesus, (431 A.D.), at which Mary’s title “Theotokos” – Mother of God – was formally proclaimed.

Another ancient tradition proposes that Mary returned from Ephesus to Jerusalem, died there, and was Assumed into heaven. Both traditions bear consistent testimony to the extraordinary privilege – her bodily Assumption – bestowed upon the Blessed Mother. 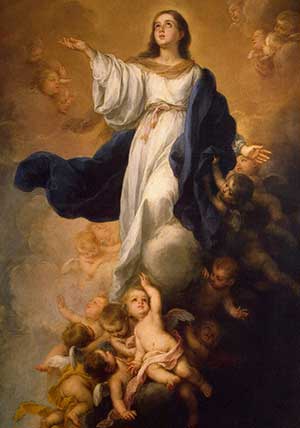 The Church’s liturgy (Preface for the Mass of the Assumption) highlights for us how, in the mystery of the Assumption, Mary was the first sign of the eternal destiny for which we all dare to hope: that one day we, too, will live - body and soul - in heaven forever with Christ. Mary is the “image of [the] Church’s coming to perfection and a sign of sure hope and comfort to [God’s] pilgrim people.”

The celebration of the Queenship of Mary gives us reassurance that Mary’s work is not over. She participated in an essential way in the Incarnation of Jesus Christ. She accompanied Him throughout His life, suffering, death and resurrection, and was a witness to His Gospel message.

From heaven Mary continues to remind us of the need for prayer and true repentance. She intercedes for us sinners. Her work is always to lead all her spiritual children to Jesus Christ.

The Death, Burial, and Assumption of the Blessed Virgin Mary
— According to the Visions of Blessed Anne Catherine Emmerich

“The blessed body was prepared by the women for burial. …  The women went about their task most devoutly and reverently, just as had been done when preparing the most Sacred Body of Jesus for burial. The body of the Blessed Virgin was lifted in the linen of the deathbed and laid in a long basket, which had a lid and which was filled with covers, so that when lying on them, it rose above the edge. The body was of a dry, indescribable whiteness as if shining with light. … The face was fresh and blooming.”

“ … The holy body was shrouded in its white garments and enveloped in the winding-sheets. They placed on the head a wreath of flowers, white, red, and sky-blue, as a symbol of Mary's virginity, and over the face a transparent veil, through which it could be seen encircled by the wreath. The feet also, which were bound up in aromatic herbs, could be traced through the linens that enveloped them. The arms and hands were bound crosswise on the breast. Thus prepared, the holy body was laid in a coffin of snow-white wood with a tightly fitting, arched cover, which was fastened down at the head, the foot, and in the middle, with gray straps. The coffin was then laid on a litter.

“When it was time to bear the coffin to the grotto, one half-hour distant, Peter and John raised it from the litter and carried it in their hands to the door of the house.  … Six of the Apostles thus carried it in turn.

“… Reaching the grotto … four of the Apostles bore the coffin in, and placed it in the hollow of the tomb. All went, one by one, into the grotto where they knelt in prayer before the holy body, honoring it and taking leave of it. Then the tomb was shut in by a wicker screen that extended from the front edge of the tomb to the top of the vaulted wall above.

“On the night following the burial, took place the bodily Assumption of the Blessed Virgin into heaven. I saw on this night several of the Apostles and holy women in the little garden, praying and singing Psalms before the grotto. I saw a broad pathway of light descend from heaven and rest upon the tomb. In it were circles of glory full of angels, in the midst of whom the resplendent soul of the Blessed Virgin came floating down. Before her went her Divine Son, the marks of His Wounds flashing with light.

“…. Encircling the head of the Blessed Virgin like a crown was a choir of blessed spirits. … The blessed soul of Mary, floating before Jesus, penetrated through the rock and into the tomb, out of which she again arose radiant with light in her glorified body and, escorted by the entire multitude of celestial spirits, returned in triumph to the heavenly Jerusalem.

“Next day when the Apostles were engaged in choir service, Thomas made his appearance with two companions.  …  Thomas was greatly grieved when he heard that the Blessed Virgin was already buried.

“The Apostles …  accompanied him with lights to the tomb. Two disciples bent the shrubbery to one side. Thomas, Eleanor, and John went in and prayed before the coffin. Then John loosened the three straps that bound it, for it rose high enough above the trough-like couch to admit of being opened. They stood the lid of the coffin on one side and, to their intense astonishment, beheld only the empty winding-sheets lying like a husk, or shell, and in perfect order. Only over the face was it drawn apart, and over the breast slightly opened. The swathing-bands of the arms and hands lay separate, as if gently drawn off, but in perfect order. The Apostles gazed in amazement, their hands raised.

“John cried out: ‘She is no longer here!’  The others came in quickly, wept, prayed, looking upward with raised arms, and finally cast themselves on the ground, remembering the radiant cloud of the preceding night. Then rising they took the winding-sheet just as it was, all the grave linens, and the coffin to keep as relics, and returned to the house by the Holy Way, praying and singing Psalms.”