Directly after Mass last Sunday, I knelt down to pray for a few minutes as usual. And also as usual, voices erupted within the church. Men discussed football and ladies chatted about their plans for the coming week. Distracted, I stopped for a minute and thought, “We have so much time to talk about trivial matters. Should we be focusing on them when we are in the presence of our God and our Creator?”

Do we seek to elevate the mundane or to banalize the Divine?

If we were in the room with the Pope or the Queen of England, where would our attentions lie? We would either be clamoring to speak with them or we would revere their presence in silence as they spoke to us. Certainly, our God is higher than any creature. He is the King of Kings and the Lord of Lords! When we are in His house, a sacred place, our focus should be solely on Him. 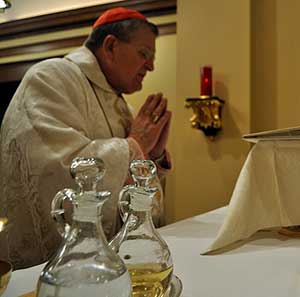 The word “sacred” literally means to consecrate, or to set apart.

How should we conduct ourselves in the presence of the sacred? How do we set apart daily trivial matters from the higher things?

We must be in the world, but not of the world!

Maligned, persecuted, and tossed into exile three times, St. Cyril of Jerusalem endured great trials for the Church in his spiritual battle for truth. This month of March, we celebrate his feast day.

I don’t know about you, but to me this sounds all too familiar. Not all of the saints were exiled, but they were all hated by the world.

Our Lord warned us of this fate: “If you belonged to the world, it would love you as its own. As it is, you do not belong to the world, but I have chosen you out of the world. That is why the world hates you” (John 15:19).

What do you think Our Lord means when He says you and I are to be in the world, but not of the world? We live in the world physically. We are citizens of a country and members of a community who vote, work, and pay taxes. But we are so much more than that. We do not derive our identity from the world. We are first and foremost Christians and heirs to the Kingdom of Heaven. We must not let the spirit of the world strangle our priorities.

We will be persecuted when we visibly live out our Catholic Faith. In days of crisis, we must not forget that the Church has made it through every possible turbulence! St. Cyril told his catechumens: “Make your fold with the sheep; flee from the wolves: depart not from the Church.”

We can be hated by the world when we make an unpopular stand for what is true and sacred. Are we getting swept away with the crowd or are we standing firm in our beliefs?

Who is St. Cyril of Jerusalem? 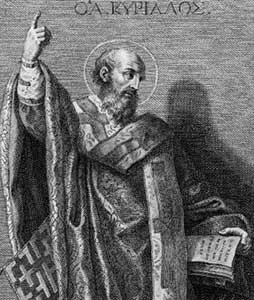 A fourth century bishop of Jerusalem and Doctor of the Church, Cyril was given the important duty of preparing candidates for Baptism. Now, Cyril did not have countless resources for his catechumens like we do today, so he wrote his own manuals on rituals and the sacredness of the Sacraments.

His collection of 23 catechetical lectures (Catecheses) is his primary surviving work, divided into the Procatechesis, or the first 18 lectures given during Lent, and the “Mystagogic” Lectures which instructed the newly baptized the week after Easter. They are the earliest record of the systematic teaching of the Church on the Creed and Sacraments. In a 2007 general audience, Pope Emeritus Benedict XVI praised him for his Christian instruction documents, calling them “integral…involving body, soul, and spirit.” He claimed that they remain emblematic for the catechetical formation of Christians today.

Guided by St. Cyril of Jerusalem’s unwavering devotion and attention to reverence, here are 4 practical tips for defending and keeping the sacred from the profane.

In his catechesis, Cyril’s instruction for the reception of Holy Communion is described by Justin Martyr: “We do not receive these things as common bread and common drink…” (Apolog. I. 66).

When we approach the Eucharist with a casual attitude instead of an attitude of reverence, we are treating His Body, Blood, Soul, and Divinity as common bread and wine. 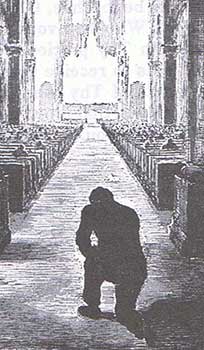 Likewise, it is fitting to genuflect with the right knee to the ground, instead of bow, to the presence of Christ in the tabernacle when we pass by or enter our pews. A genuflection signifies adoration and is reserved for the Most Blessed Sacrament.

When the Blessed Sacrament is exposed in a monstrance, we should make use of double genuflection, kneeling briefly on both knees while reverently bowing the head.

Cyril also told his catechumens that, “The honesty of purpose makes thee called: for if thy body be here but not they mind, it profiteth thee nothing.”

Some might find talk about posture to be rigid. But modern psychology tells us there is a connection between what is happening in our minds and hearts and our exterior posture, since our posture is non-verbal communication. On the reverse, changing our exterior position can affect our interior disposition.

For Catholics, this means that when we kneel or fold our hands in prayer when we don’t feel like it, our relaxed and casual mindset could change into one of prayerfulness and respect.

2. Practice charity by remaining silent before the Blessed Sacrament.

In my story above, I mentioned the chatter before the Blessed Sacrament after Mass. Was it a distraction from adoration of Our Lord? Yes, it was. The convenient and popular thing to do would be to join in. But Cyril sought to lead by gentle persuasion, and pled for self-discipline as needful for the good of the soul (De Baptismo, c. 20. Cf. Justin M. Apol. I c. 61).

Sadly, love of neighbor is often confused with toleration and a friendly face. Unnecessary communication with our fellow men in the presence of the Blessed Sacrament is uncharitable to those in silent prayer and meditation, and is disrespectful to Our Lord. 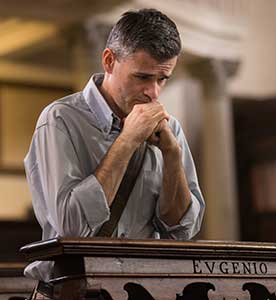 Instead, we must use self-discipline, examine ourselves, and lead by example. Make it a habit to kneel down in silent prayer for at least five minutes after Mass ends. When you are approached by someone desirous of speaking with you, motion toward the doors and kindly whisper, “Let’s talk outside.”

We should also refrain from applause during or after Mass. When we clap for the choir or anyone else, it turns the focus of the Mass toward people rather than on God and His Sacrifice. It lessens the degree of reverence and solemnity—after all, we are not at a concert.

"Wherever applause breaks out in the liturgy because of some human achievement, it is a sure sign that the essence of the liturgy has totally disappeared and been replaced by a kind of religious entertainment” (Joseph Ratzinger, Spirit of the Liturgy, 198).

3. Cut out distractions before Mass.

St. Cyril’s teachings on preparation for Baptism also applies to preparation before Mass: “But beware lest thou have the title of “faithful,” but the will of the faithless…Were it thy wedding-day before thee, wouldest thou not have disregarded all else, and set about the preparation for the feast?”

In other words, we should mind the hour of fasting before reception of Holy Communion, but go above and beyond the requirements. We can refrain from listening to music (apart from sacred music) on our way to Mass, take a few extra minutes to be sure our appearance is tidy and fitting for Our Lord, and arrive a little early to pray before Mass begins.

4. Train your intellect to defend the sacred.

St. Cyril’s writings are regarded as masterful and significant to the Faith. He is known for his exhaustive Biblical knowledge and his forbearance in the face of heresy. Though he was born after the legalization of Christianity in the Roman Empire, there were still rampant persecutions against the Church at that time, which produced controversies regarding particulars of theology and the jurisdiction of the bishops—both of which Cyril became involved in. 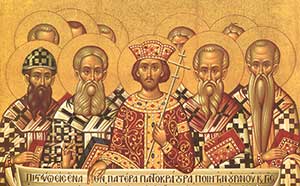 Cyril was falsely suspected of the heresy of Arianism, the claim that Jesus was merely a creature. This false accusation came about because Archbishop Acacius of Caesarea, who consecrated Cyril a bishop, was influenced by the Arians. Cyril also disputed with Acacius, who claimed to have jurisdiction over Jerusalem. In return, he was exiled from Jerusalem three times. But he did not fail to defend the sacred.

In 381, Cyril participated in the Second Ecumenical Council in Constantinople, which condemned the off-shoots of the heresy of Arianism.

Here are a couple ways we can train ourselves in basic Catholic Apologetics to explain and defend the faith:

St. Cyril is famous for fostering the development of Jerusalem as a pilgrimage sight for all of Christendom.

Many of us cannot travel internationally to a famous pilgrimage site, but we can make efforts to see sacred places within a few hours drive of our residence. For instance, there are dozens of Catholic shrines in the United States. Plan a day trip to one of them! 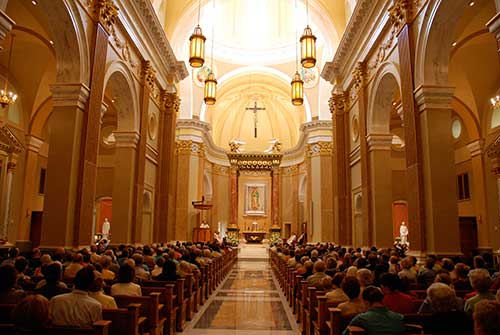 Shrine of Our Lady of Guadalupe in La Crosse, Wisconsin.

Pilgrimages foster a sense of the sacred. They have a deeper meaning than just traveling and viewing. A pilgrimage immerses us in the spiritual and cultural aspects of Our Lord, Our Lady, and the saints. Prayer and meditation during the pilgrimage is essential to reinvigorate or even transform our spiritual lives.

As St. Cyril encouraged, “Let your mind be refined as by fire unto reverence; let your soul be forged as metal: let the stubbornness of unbelief be hammered out: let the superfluous scales of the iron drop off, and what is pure remain; let the rust of the iron be rubbed off, and the true metal remain” (15).

Embarking on a pilgrimage can be an act of sacrifice and penitence. In the Middle Ages, some pilgrims who were making reparation for grave sins walked barefoot and begged for food along their journey. Nowadays, we can retain the pilgrimage spirit by eating and lodging simply.

St. Cyril of Jerusalem shows us how to conduct ourselves in the presence of the sacred. Clearly, we must use all our fortitude and resources to defend and promote what is pleasing to the Most Sacred, Our Lord Jesus Christ!