Breathtaking Parish and Thomas McKenna Joins the Portolá 250 in Old Town Pasadena…In Style! A Must Read…A Must See

The visit to St. Andrew Church in Old Pasadena was, well, breathtaking. I was thankful to arrive early with my son Alex, who was traveling with me. This would be Alex’s last stop before I drove him home for school the next day and let’s just say he, along with myself, were over the moon with the experience. Founded in 1886, the oldest Catholic parish in Pasadena and one of the oldest in Los Angeles Country, St. Andrew was one of the most beautiful churches I’ve been in. 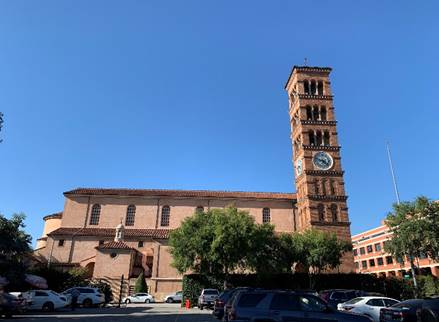 Its Romanesque Revival campanile bell tower is visible for miles and is one of the landmarks of Pasadena. The Romanesque church tower and façade are replicated from Santa Maria in Cosmedin, a church dedicated in 1123 situated in Rome on the left bank of the Tiber River.

The interior of the church is a replica of the Basilica of Santa Sabina dating to the early days of Christianity in Rome. In Santa Sabina, situated on the Aventine Hill, marbles from many lands enhance the columns crafted by Italian artisans of the 20th century.

The homily and challenge 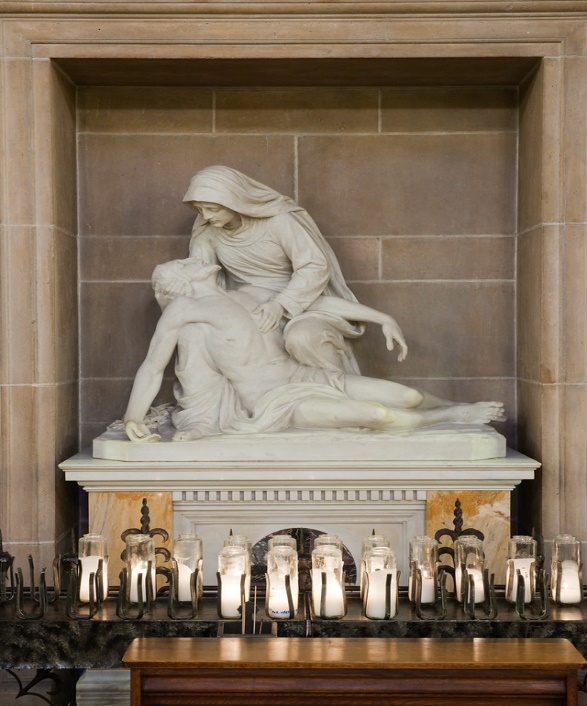 Our pilgrim team was welcomed by Rev. Marcos J. Gonzales, who celebrated Mass giving a riveting homily that challenged us all. He began with a theme he called ‘half-off cross’. He described today’s culture where people have some form of cross everywhere including wearing them as jewelry around their necks, as earrings and even tattoos.  These crosses are casual, light in form and are cheap in terms of personal cost aside from money; but, if we truly desire to be a disciple of Christ, we must count the true costs. There is a price to pay if one wants to be His disciple and it includes carrying a cross daily. He then asked us if we are willing to carry a cross that actually has some weight to it. Then, pointing to the beautiful Pieta in the parish, he said that Our Lady knew this price all too well when she held her dead son in her arms. I will never forget this challenge to say the least. Thank you, Fr. Marcos! 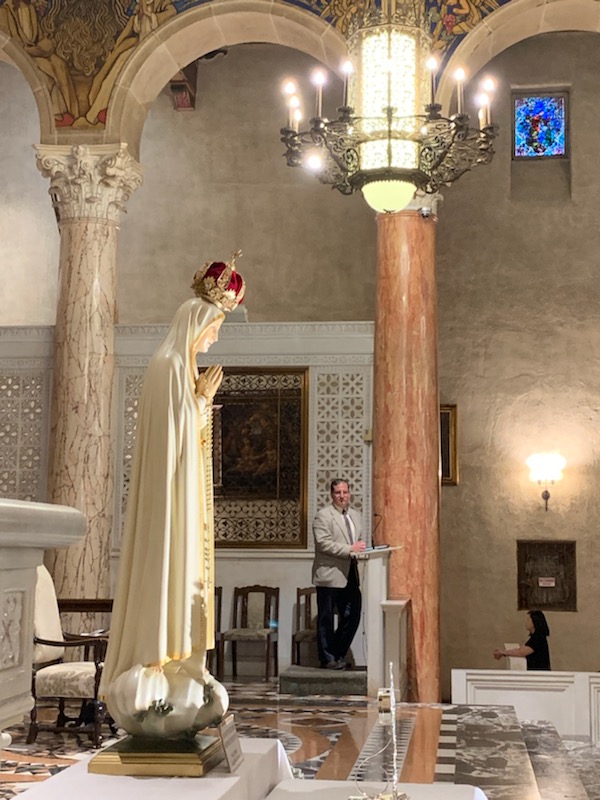 Leading a posse of Knights on Harley Davidson motorcycles escorting the rolling World Apostolate of Fatima billboard and its miraculous passenger the world-famous International Pilgrim Virgin Statue into Old Town Pasadena, Catholic leader and senior lay organizer, Thomas McKenna, joins the tour with a roar and in style. After Thomas rode in on the Harley well in time for Mass and the Rosary that followed, Thomas shared his decades of experience traveling with the statue and how he witnessed countless times how the graces of Our Lady changed lives. He also stressed that the Fatima message of hope is needed in our world as much today as at any other time.

With Thomas’ arrival to relieve me on the pilgrimage, I was able to run my son home so he would be there for school the coming Monday. I plan to meet Thomas back on the road in Bakersfield, where we have a visit scheduled and where his parents live, as he grew up there.

At the end of the evening, I departed to take my son home. Meanwhile, Fr. Marcos invited Thomas to lodge at the rectory. It helped our Portola expenses and more importantly, these two friends got to spend some quality time sharing the faith and speaking about the path forward for the Church. 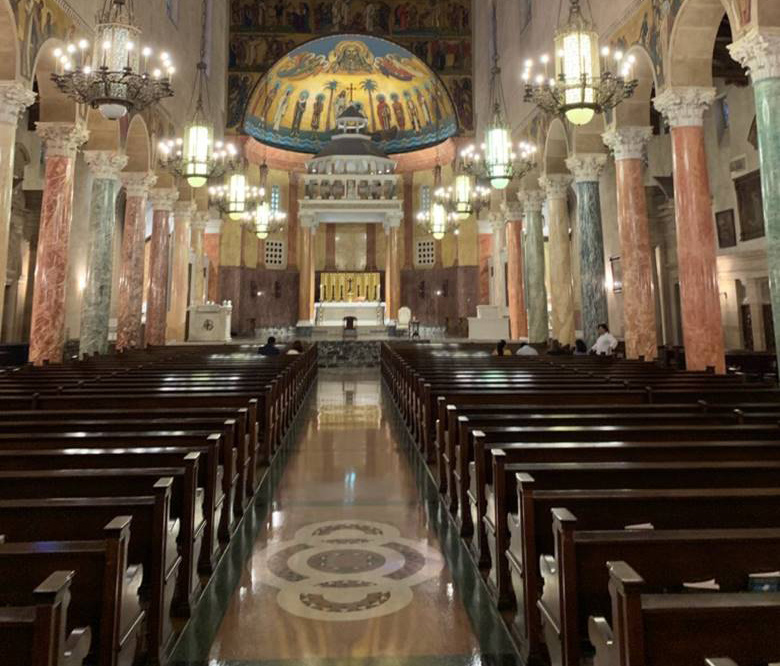 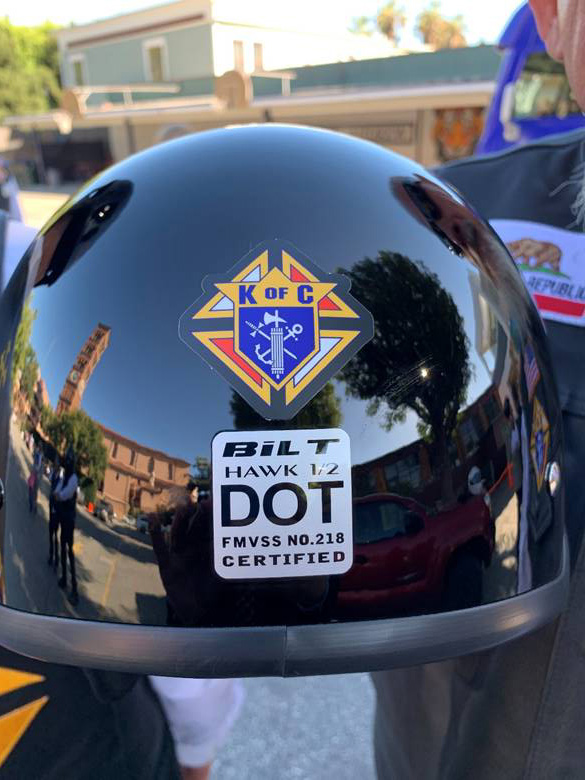 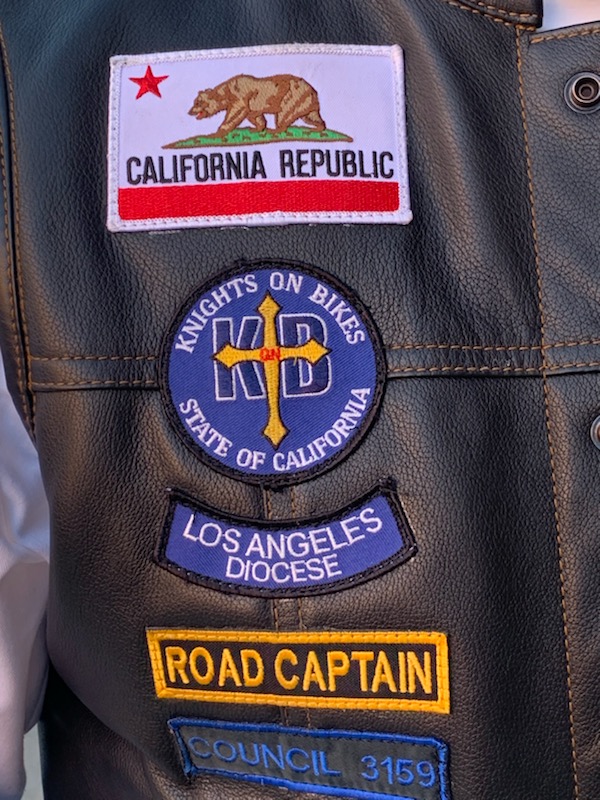 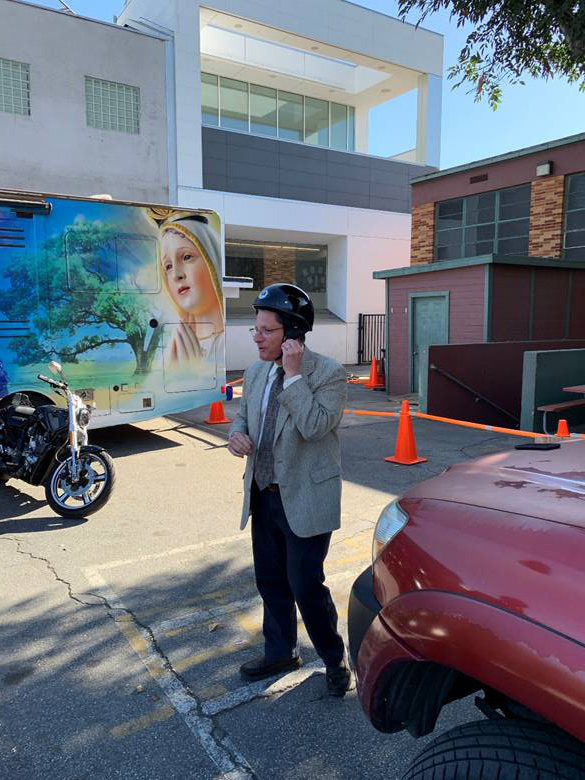