Seal of Confession - Catholic Action For Faith and Family

On Easter Sunday night, the risen Jesus appeared to the Apostles who were gathered in the Upper Room, (Jn 20: 19ff.)  He gave them several gifts:  The gift of His peace (vv. 19, 21); the Gift of the Holy Spirit, (v. 22), and the mandate and power to forgive sins, “Whose sins you forgive are forgiven them, and whose sins you retain, are retained.” (v. 23) 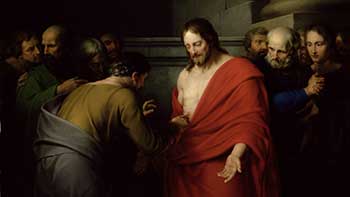 These gifts remain important to the act of redemption accomplished in Christ’s death and resurrection.  God forgives our sins. In Christ, He redeems us; He pays the price for our sins.

In the Old Testament we also hear of the extraordinary gift of God’s forgiveness of our sins. Particularly powerful are the words of the prophet, Micah. “Who is a God like you, who removes guilt and pardons sin for the remnant of his inheritance; Who … delights in mercy, and will again have compassion on us, treading underfoot our iniquities? You will cast into the depths of the sea all our sins.”(Mc 7”18-19; see also, Ex. 34:6-7; Zech 13:1)

Jesus Christ instituted the Sacrament of Penance, (also called Confession and Reconciliation), so that the Church might continue His work as Divine Physician; to heal souls and bodies in the power of the Holy Spirit. (Catechism of the Catholic Church, no. 1421)

St Augustine writes that, “Were there no forgiveness of sins in the Church, there would be no hope of life to come or eternal liberation.” (quoted in CCC. no. 983)  St John Chrysostom says of the priest in Confession, “He has received from God a power that is given neither to angels or archangels. God above confirms what priests do here below.” (Ibid.) 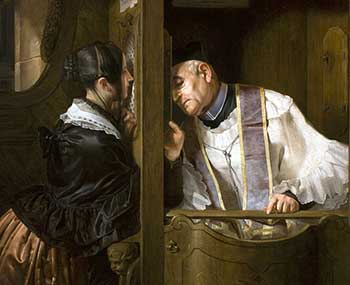 In this we see the divine origin and nature of Sacramental Confession. It is more than psychological counseling; more than a human tribunal. Through the ministry of the Church, it imparts the pardon and peace which God alone can give. It is hope for sinners.

Written clearly in Church law, and in her Tradition, is the most sacred nature of the Seal of Confession. The penitent must have the greatest assurance that what is revealed in Confession, to the priest, can never be used, or conveyed in any way, for any reason whatsoever. “The sacramental seal is inviolable; therefore, it is a crime for a confessor in any way to betray a penitent by word or in any other manner or for any reason.” (Code of Canon Law, 983;1)

What the priest hears in Confession he must regard as never having heard. He cannot act on it outside the Confessional. He cannot be influenced by it. He acts only as the agent of Jesus Christ and the agent of the Church to announce the forgiveness of God, who “casts into the depths of the sea all our sins.”

In the Church’s history there have been recorded some “martyrs” for the Seal of Confession, priests who were killed because of their refusal to reveal the Confessions of penitents. Indeed the priest in Confession must be prepared to suffer any attack, and even to die rather than violate the secrecy of Confession. A priest who violates the “Seal” incurs an automatic excommunication. He must make recourse to the Vatican Tribunal to receive absolution of this sin.

Civil governments have most often respected and protected the sacred nature of Catholic Confession. As most secular jurisdictions honor the complete confidentiality of the Attorney-Client privilege, the Doctor-Patient privilege, so also the Priest-Penitent privilege has usually enjoyed this protection.

Recent rulings in some jurisdictions of Australia have confirmed those courts’ intentions to require priests who hear about child abuse – within the sacrament of Confession - to report it.

A bill passed on June 7, 2018, by the Legislative Assembly of the Australian Capital Territory (ACT) extends mandatory reporting of child abuse to cover churches and church activities, including the Catholic confessional. All the political parties in the Assembly supported the measure.

Up until now, throughout Australia, the confessional was exempt from ACT’s reporting laws. Beginning March 31, 2019, priests who do not report confessions regarding child abuse to the police risk prosecution.  The new reporting laws will require priests to report allegations or offenses related to children to the ACT Ombudsman within 30 days.

As horrendous as the crimes of child sexual abuse are, the religious integrity of the Sacrament of Confession cannot be made subject to such civil requirements. The priest-confessor must be prepared to go to prison rather than defile the Sacramental Seal.

The Barr government's plans to expand the Reportable Conduct Scheme to include religious organizations is to be commended but it should not ignore the concerns of the Catholic community.

The Catholic Church shares the government’s concern to protect the safety of children and wishes to be a part of the solution. The draft laws are a consequence of the profound failure of the leadership of the Church and the duty of care we owe to children. It is a failure that will haunt the Church for decades, and which has haunted many survivors for even longer.

For these failures, the Church is sorry. I am sorry.

At the same time, we are doing all that we can to make sure our schools and parishes are safe places and our protocols and procedures for responding immediately to such issues are in place. We have heard the Australian community, including the very concerned Catholic community, we have learned, and responded on a practical level. I am, committed to continuing this important work.

First, what sexual abuser would confess to a priest if they thought they would be reported? It is the common experience of pastors that those who abuse children do not confess the crime - to police or to priests. If the seal is removed, the remote possibility that they would confess and so could be counselled to report is gone.

Second, the government has itself acknowledged that the church’s “Truth, Justice and Healing Council said that evidence put before the Royal Commission about abuse of the seal of confession was, at best, selective and patchy, and made it difficult to see systemic abuse of the seal of confession”. The government did not challenge that assessment. People who attend confession are sorry for their sins, indicate resolve not to sin again and seek God’s mercy. Pedophiles carry out evil and unspeakable criminal acts. They hide their crimes; they do not self-report.

Fourth, priests are bound by a sacred vow to maintain the seal of the confession. Without that vow, who would be willing to unburden themselves of their sins, seek the wise counsel of a priest and receive the merciful forgiveness of God?

The government claimed it was interested in consultation on this crucial issue, inviting me to meet with the Attorney General to discuss the importance of both the protection of children and the seal of the confession. Yet, today, the government is debating legislation before that meeting has taken place. It is vital we get this right. The Catholic community wants us to fix this. I take very seriously our responsibility to be part of the solution, but we need to be a part of effective dialogue.

This legislation also threatens something else very important to Catholics and to other people who have a religious belief – our religious freedom. Religious freedom is the freedom to hold a belief and, secondly, the freedom to manifest belief in community and in public, privately and individually in worship, observance, practice and teaching.

The government threatens religious freedom by appointing itself an expert on religious practices and by attempting to change the sacrament of confession while delivering no improvement in the safety of children.
The proposed law would put the ACT out of step with other jurisdictions.

The reason these laws are likely to pass is not the protection of children, but the shocking history of abuse in the Catholic Church. Sadly, breaking the sacred seal of confession won’t prevent abuse and it won’t help our ongoing efforts to improve the safety of children in Catholic institutions. We urge the chief minister to allow the Catholic community into this conversation to ensure we are a part of the solution.

Together we can ensure the protection of children’s rights and uphold the integrity of our sacraments.