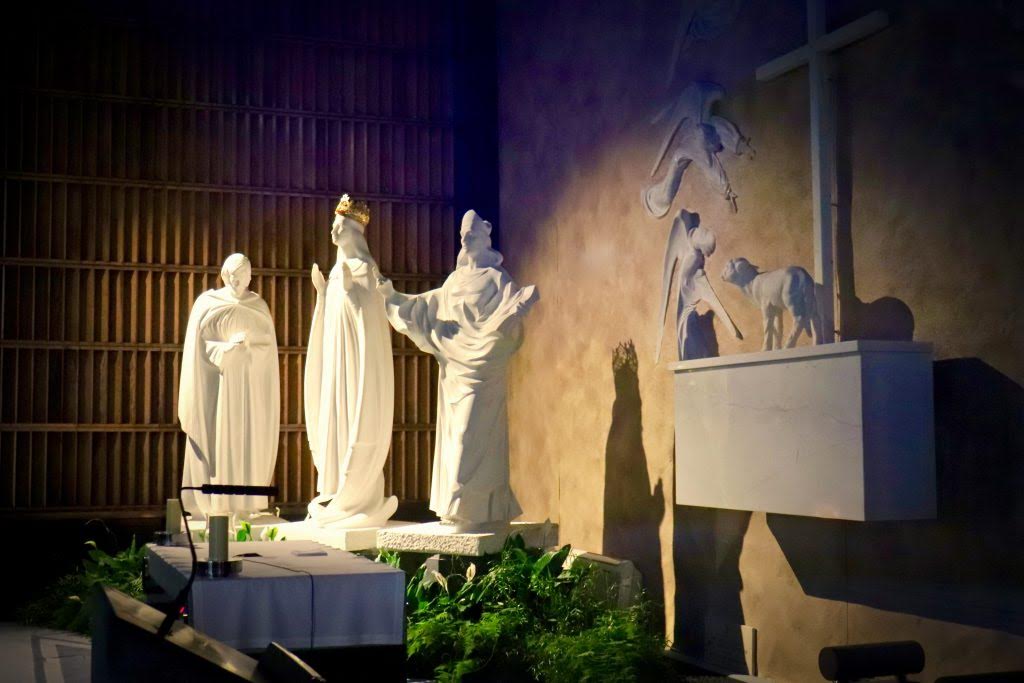 Fifteen people gave their testimonies to the August 21, 1879 Apparition in Knock, Ireland. The most descriptive and detailed is that of Mary Byrne:

“I live in the village of Knock, to the east side of the chapel. At the distance of three hundred yards or so from the church. I beheld, all at once, standing out from the gable, and rather to the
west of it, three figures which, on more attentive inspection, appeared to be that of the Blessed Virgin, St. Joseph and St. John.

That of the Blessed Virgin was life-size, the others apparently either not so big or not so high as her figure.

They stood a little distance out from the gable wall, and, as well as I could judge a foot and a half or two feet from the ground. The Virgin stood erect, with eyes raised to heaven, her hands elevated to the shoulders or a little higher, the palms inclined slightly towards the shoulders or bosom. She wore a large cloak of a white colour, hanging in full folds and somewhat loosely around her shoulders, and fastened to the neck.

She wore a crown on the head, rather a large crown, and it appeared to me somewhat yellower than the dress or robes worn by Our Blessed Lady. In the figure of St. Joseph, the head was slightly bent, and inclined towards the Blessed Virgin, as if paying her respect. It represented the saint as somewhat aged, with grey whiskers and greyish hair.

The third figure appeared to be that of St. John the Evangelist. I do not know, only I
thought so, except the fact that at one time I saw a statue at the chapel of Lecanvey,
near Westport, Co. Mayo, very much resembling the figure which stood now before me in group with St. Joseph and Our Blessed Lady, which I beheld on this occasion.
He held the Book of Gospels, or the Mass Book, open in his left hand, while he stood slightly turned on the left side towards the altar that was over a little from him. I must remark that the statue which I had formerly seen at Lecanvey chapel had no mitre on its head, while the figure which now beheld had one, not a high mitre, but a short set kind of one. The statue at Lecanvey had a book in the left hand, and the fingers of the right hand raised. The figure before me on this present occasion of which I am speaking had a book in the left hand, as I have stated, and the index finger and the middle finger of the right hand raised, as if he were speaking, and impressing some point forcibly on an audience.

It was this coincidence of figure and pose that made me surmise, for it is only an
opinion, that the third figure was that of St. John, the beloved disciple of Our Lord, but I am not in any way sure what saint or character the figure represented. I said, as I now expressed, that it was St. John the Evangelist, and then all the others present said the same – said what I stated.

The altar was under the window, which is in the gable and a little to the west near the centre, or a little beyond it. Towards this altar St. John, as I shall call the figure, was looking, while he stood at the Gospel side of the said altar, which his right arm inclined at an angle outwardly, towards the Blessed Virgin.

The altar appeared to be like the altars in use in the Catholic Church, large and full-
sized. It had no linens, no candles, nor any special ornamentations; it was only a plain altar. Above the altar and resting on it, was a lamb, standing with the face towards St John, thus fronting the western sky. I saw no cross or crucifix. On the body of the lamb and around it, I saw golden stars, or small brilliant lights, glittering like jets or glass balls, reflecting the light of some luminous body.

I remained from a quarter past eight to half past nine o’clock. At the time it was raining.”

Mary Byrne’s testimony should give us hope – pray always, trust and have faith in God working miracles in our lives.

Now let us seek Our Lady’s intercession, for our own needs and especially for Cardinal Burke to be restored to good health:

Give praise to the Father Almighty, To His Son, Jesus Christ the Lord, To the Spirit who lives in our hearts, Both now and forever Amen.

Our Lady of Knock, Queen of Ireland, you gave hope to your people in a time of distress, and comforted them in sorrow. You have inspired countless pilgrims to pray with confidence to your divine Son, remembering His promise, "Ask and you shall receive, seek and you shall find."

Help me to remember that we are all pilgrims on the road to heaven. Fill me with love and concern for my brothers and sisters in Christ, especially those who live with me. Comfort me when I am sick, lonely or depressed. Teach me how to take part ever more reverently in the Holy Mass. Give me a greater love of Jesus in the Blessed Sacrament. Pray for me now, and at the hour of my death. Amen.

St. Joseph, chosen by God to be the Husband of Mary, the Protector of the Holy Family, the Guardian of the Church, protect all families in their work and recreation and guard us on our journey through life.

St John, beloved disciple of the Lord, faithful priest, teacher of the Word of God. Help us to hunger for the Word, be loyal to the Mass and to love one another.

(Now mention your own special intentions, especially that Cardinal Burke be restored to good health.)

With the Angels and Saints let us pray: Give praise to the Father Almighty, to His Son, Jesus Christ the Lord, to the Spirit who lives in our hearts, both now and forever. Amen.