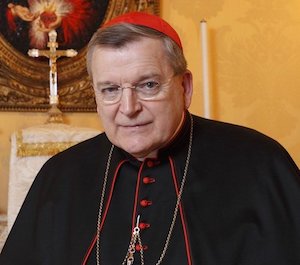 Thomas McKenna, the president of Catholic Action for Faith and Family, interviewed Cardinal Raymond Burke this week on the clergy abuse scandal.

Thomas McKenna: Your Eminence, a new wave of clergy sexual abuse has surfaced and is indicating a widespread practice of homosexuality among clergy in dioceses and seminaries across the country. What would you say is the root cause of this corruption?

Cardinal Raymond Burke: It was clear after the studies following the 2002 sexual abuse crisis that most of the acts of abuse were in fact homosexual acts committed with adolescent young men. There was a studied attempt to either overlook or to deny this. Now it seems clear in light of these recent terrible scandals that indeed there is a homosexual culture, not only among the clergy but even within the hierarchy, which needs to be purified at the root. It is of course a tendency that is disordered.

I think it has been considerably aggravated by the anti-life culture in which we live, namely the contraceptive culture that separates the sexual act from the conjugal union. The sexual act has no meaning whatsoever except between a man and a woman in marriage since the conjugal act is by its very nature for procreation. I believe that there needs to be an open recognition that we have a very grave problem of a homosexual culture in the Church, especially among the clergy and the hierarchy, that needs to be addressed honestly and efficaciously.

Cardinal Burke: There is no need to develop new procedures. All of the procedures exist in the Church’s discipline, and they have existed throughout the centuries. What is needed is an honest investigation into the alleged situations of grave immorality followed by effective action to sanction those responsible and to be vigilant to prevent that similar situations arise again.

This idea that the conference of bishops should be responsible for addressing this is misguided because the bishops’ conference does not have surveillance over the bishops within the conference. It is the Roman Pontiff, the Holy Father, who has the responsibility to discipline these situations, and it is he who needs to take action following the procedures that are given in the Church’s discipline. This is what will address the situation effectively.

Thomas: Your Eminence, the faith of many in the Church, as a holy rather than corrupt institution, has been shaken. People don’t know what to think about their bishops and their priests. How should the faithful respond to this crisis, especially taking into consideration that many are feeling discouraged and ashamed of their Church?

Cardinal Burke: I understand fully the anger, the profound sense of betrayal that many of the faithful are feeling, even as I experience it myself. The faithful should insist that the situation be addressed honestly and with determination. What we must never permit is that these gravely immoral acts, which have sullied so much the face of the Church, permit us to lose trust in Our Lord, who is the Head and Shepherd of the flock. The Church is His Mystical Body, and we must never lose sight of that truth.

We should be profoundly ashamed of what certain shepherds, certain bishops, have done, but we should never be ashamed of the Church because we know that it is pure and that it is Christ Himself, alive for us in the Church, Who alone is our way to salvation. There is a great temptation that our justified anger over these gravely immoral acts will lead us to lose faith in the Church or to be angry with the Church, instead of angry with those who, even though they held the highest authority in the Church, have betrayed that authority and have acted in an immoral way.

There existed in the Roman Pontifical (the Latin Catholic liturgical book that contains the rites performed by bishops) for centuries the rites for the degradation of clerics and also of hierarchy who had failed gravely in their office. I believe it would be helpful to read over again those rites to understand deeply what the Church has always understood, which is that shepherds can go astray, even in a grave way, and then must be appropriately disciplined and even dismissed from the clerical state.