On this rock I will build my Church, and the gates of hell shall not prevail against it!
(Mt 16:18)

Jesus was traveling in the northern part of Palestine, at Caesarea Philippi , (Mt 16:13 ff) when He asks the disciples, “Who do people say that I am?"; then, "Who do you say that I am?”  Peter makes his extraordinary profession of faith.

“Simon Peter replied, ‘You are the Christ, the Son of the living God.’   Jesus answered him, ‘Blessed are you, Simon Bar-Jonah! For flesh and blood has not revealed this to you, but my Father who is in heaven.  And I tell you, you are Peter, and on this rock I will build my church, and the gates of hell shall not prevail against it.’”  (Mt 16: 16-18) 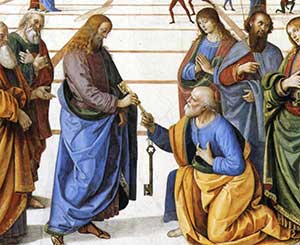 Jesus entrusts Peter with the keys of the Kingdom and appoints him as spokesman for the Church. He is the first Pope. Jesus says that on this “rock” He will build His Church. And then He makes an extraordinary promise, “The gates of hell will not prevail against it.”

In recent years I have heard several good Scripture scholars point out – correctly I think - that Jesus is saying that Hell’s gates will not prevail, that is,  they won’t last against the work of the Church.  Such an interpretation suggests that it is our job, as the Church, to be about the business of breaking down Hell’s gates. United to Jesus Christ, the Church has the leading role against evil. We must do all we can to break the power of hell, the devil – and Jesus prophecies “those gates will not prevail.”  They will collapse against our attack. Indeed the Church on earth has been called the “Church Militant.” Perhaps this language is not “politically correct” in our culture, but it is theologically correct. Soldiers protect, and they also attack.

As soldiers for Christ, how do we protect ourselves and our families, from the devil?

Above all, we must keep the grace of our baptism alive.  Sanctifying Grace is the first and necessary prerequisite for doing supernatural battle.  We have to avoid sin, especially mortal sin, which kills God’s life in us. Mortal sin takes away our protective shield against the devil. It leaves us vulnerable.  If we sin, we must repent and get to Confession for Sacramental Absolution from the priest.

Even if we have not committed Mortal Sin, we can fortify ourselves with the sacraments of Holy Mother Church, especially frequent Confession and worthy Holy Communion. We must avoid the circumstances which lead us to sin, and we can pray daily which, strengthens us interiorly. 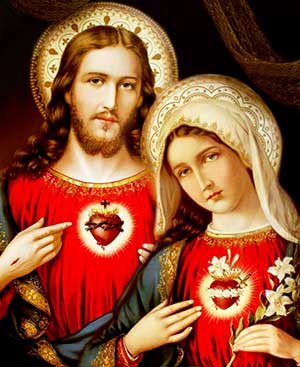 We can also use the ‘sacramentals,” such as Holy water, the scapular, a blessed medal, the image of the Sacred Heart and the Immaculate Heart of Mary, enthroned in our home, the blessing of our home by a priest.

Parents have the authority, be reason of their vocation, to bless their children by tracing the cross on their foreheads every day. All these things, and others, can provide protection to us against hell.

In addition to defending ourselves from evil, Our Lord seems to tell us that we can do something about breaking down the power of Hell!

When we live in the state of sanctifying Grace, we retain a share in God’s power to do battle. “Apart from Me you can do nothing,” Jesus says. (Jn 15:5) Paul writes,  “I can do all things through Him who strengthens me.” (Phil 4:13)  Armed in this way, with God’s life of grace, all of our good deeds, carried out for love of Christ, carry tremendous power. We can beat steadily against Hell’s gates.

The uncompromising proclamation of lasting moral truths send the devil into confusion and can break the grasp of the one who is called  “father of lies.”

Exorcists explain that the Church’s prayers of Exorcism weaken the Evil One and his grasp on a possessed soul. The fervent prayers of the Catholic Church can loosen the death grip of the devil. Similarly, the prayers of anyone in the state of sanctifying grace bring an unseen but significant strength to bear against evil. Worthy communions can be offered to break sin. Sufferings: physical, mental or emotional, particularly innocent suffering, borne in patience and ‘offered up’ to God can gain grace for even the most hardened souls. The sacrifices we make out of love, the penances and mortifications we accept, during Lent and at other times, are sledgehammers against hell’s door. 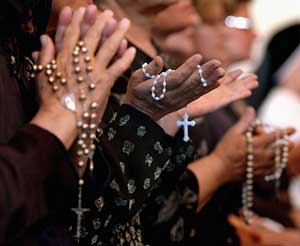 The rosary is a magnificent weapon, favored by many saints, as it implores the intercession of the Queen of heaven and earth, the Blessed Virgin Mary, the Mother of God, with the steady drumbeat of prayer. Our Lady told Padre Pio (St Pio of Petralcina) during an attack of the devil, to "take up your weapon, Pio!" The Feast Day of Our Lady of the Rosary, October 7, commemorates the victory of the Catholic Armada in the Battle of Lepanto, (October 7, 1571) against the Ottoman Muslim Empire. In those perilous days, Pope St Pius V commanded the faithful to pray the rosary for victory. The enemy was turned back, and the faith of Europe was preserved.

St Therese of Lisieux, the “Little Flower,” and a Doctor of the Church, taught, “To pick up a pin from the floor, for love of Christ, can save a soul.” By all our common everyday actions, connected to Jesus Christ in sanctifying grace, and carried out in love for Him, we beat relentlessly on the gates of hell. By the work of the Church and her faithful, the Church Militant, the gates of hell will not prevail.

Pope Leo XIII, seeing a vision of the devil threatening the Church, composed the prayer to St. Michael the Archangel. It remains a powerful call to arms, seeking the defense of the heavenly champion who first cast Lucifer from heaven, (Rev 12:7-9) and invoking him to crush the Enemy. 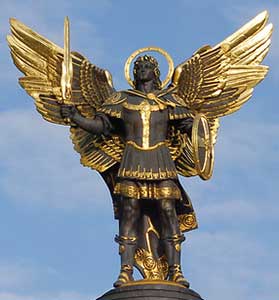 St. Michael the Archangel, defend us in battle.
Be our defense against the wickedness
and snares of the Devil.
May God rebuke him, we humbly pray,
and do thou, O Prince of the heavenly hosts,
by the power of God,
thrust into hell Satan, and all the evil spirits,
who prowl about the world
seeking the ruin of souls. Amen.